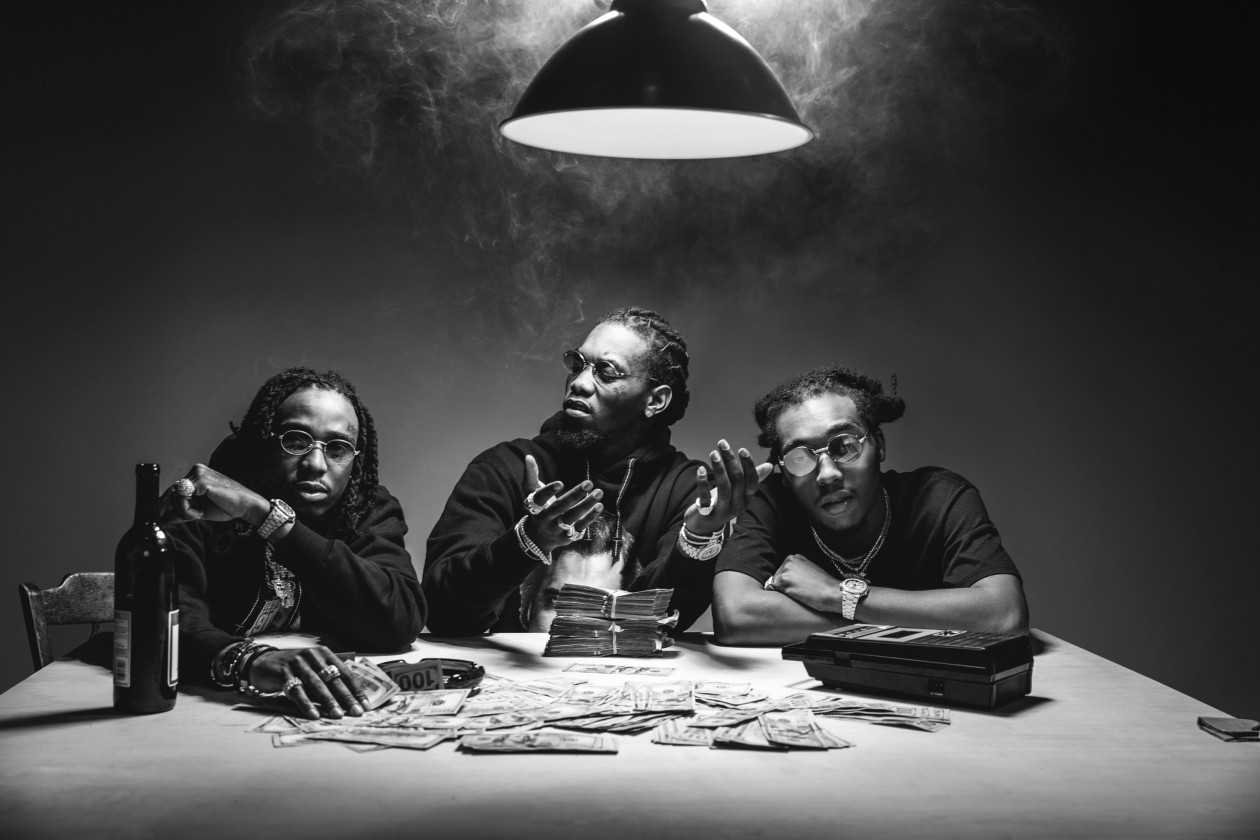 Migos shouldn’t be here. After Drake jumped on “Versace” back in 2013, I thought they had their peak. But they kept going. Then the trio from Atlanta broke through again with songs like “Fight Night” and I thought that was it. Then the Migos popularize “the dab” dance and I thought that was it. Then they went to even new levels with “Bad and Boujee”, grabbing their first #1 song on the Billboard Hot 100. Most rap artists would have took the Drake feature as the peak and faded away after their 15 minutes were up, but the Migos have only grown in notoriety and success since, even to the point where other artists are now borrowing their style.

Now at height of their popularity, The group consisting of Quavo, Takeoff, & Offset are releasing their second studio album with Culture. With the spotlight on them, can the Migos drop an project to continue their meteoric rise?

A Note About The Author: After an illustrious career of posting up half-naked women every Tuesday & Friday, this is B-Easy’s first review since 2014.

For all you fuckboys that ever doubted the Migos, you played yourself!

Migos start off the album with some help from none other that DJ Khaled. Khaled yells catch phrases while Takeoff, Offset, & Quavo deliver some quick verses. After listening to this song a couple of times, I’m convinced that it was originally made for a DJ Khaled compilations or something. There are numerous references to Culture album coming soon… but this is the album. Migos Album Done.

2. T-Shirt
Produced by XL & Nard & B
Migos slow it down on “T-Shirt” in terms of production and using a delayed flow. I didn’t mind this at all because it showed some versatility. I also appreciated to shout out to Shawty LO/D4L on the hook (“Seventeen five, same color t-shirt”). I suggest watching the music video for “T-Shirt” as it’s one of the those rare occasion where the visuals actually help elevate the song.

3. Call Casting
Produced by Buddah Bless
I might be going far with this comparison, but the production on “Call Casting” reminds of Mike Jones’ “Back Then”. Other than that, it’s a boring song. If anything, the saying grace is the hilarious lyrics and crazy ad-libs. So even if the song drags in places, hearing lines about “Bando Shane’s Rib Shack” or “White boys in the game, call ’em Andy Milonakis” helps you make it through.

4. Bad and Boujee
Featuring Lil’ Uzi Vert; Produced by Metro Boomin & G Koop
Well, what can I say about this song that hasn’t already been said? “Bad and Boujee” rose to #1 song in the country, got a high profile endorsement from Donald Glover during his Golden Globe award acceptance speech, and has forever cemented the words “Raindrop, drop top” in the nation’s lexicon.

I will say this: Lil’ Uzi’s verse is terrible and the main reason why most people turn it off before it gets to his part. They should’ve let Takeoff get that part.

5. Get Right Witcha
Produced by Murda Beatz
This is the standard medium level Migos song. The boomin’ bass heavy production, the ad-libs on every line, the various way to say you’ll fuck somebody’s girlfriend; it’s all here. It’s also kinda boring. The Migos have made songs like this a 100 times already. That’s some of their charm, but it’s hard to take it in after just listening to “Bad and Boujee”.

6. Slippery
Featuring Gucci Mane; Produced by Deko & OG Parker
If you are a trap/street rapper from Atlanta, I’m pretty sure it’s a law that you must have Gucci Mane on a song in some form (Of course Jeezy & T.I. are excluded for following this law). Speaking of Gucci, he doesn’t fit in as well with the Migos as he did with Rae Sremmurd on “Black Beatles”. At this point, I pretty sure Gucci does 15 verses at a time and just waits until somebody calls him for one. Oh, about the song? It’s okay.

7. Big on Big
Produced by Zaytoven
As soon as you hear the piano heavy track, you know it’s a Zaytoven production (The drop of the little kid saying “Zaytoven!” also gives it away). This tracks feels like they actually sat down and thought of the theme. That theme is basically saying you can’t compete with Migos (“If you havin’ neighbors and I’m havin’ acres/How you gon’ big on big?”).

It’s not a terrible song but the flow used doesn’t show off the Migos’ talent. I also hated the Quavo’s Auto-tuned singing.

8. What the Price
Produced by Ricky Racks, Keanu Beats, & 808Godz
I thought this song was an introspective look at the price you have to pay from dealing drugs and knowing that but feeling that’s your only way. And at first I feels like it was going that route. Over somber pianos and guitar riffs, here’s part of Takeoff’s verse:

Tell me what the preacher preach about
Tell me what the teacher teach about
I’ma go find me a better route
That bullshit and cap, you can leave it out
They talking but ain’t tryna hear me out
Won’t open the door, tryna leave me out
I’ma pull up and just empty out
Come through, just make sure you clear me out

After that, it goes back to poppin’ bottles, cars, diamonds, and the usual Migos troupes and leaves the song sounding unfocused.

9. Brown Paper Bag
Produced by Zaytoven
Zaytoven returns and it signifies the Migos go full braggadocio style. I’m sure fans will like this but it gets too lazy in some places for me (“You saying your wrist is rocky, well I got some boulders”). I also can’t look over the line “Money is bigger than Winfrey’s”. I mean, I know this is all talk but damn. That’s a bit much don’t you think?

10. Deadz
Featuring 2 Chainz; Produced by Cardo
The track starts out with the Migos chanting “You niggas in trouble” about 15 times (I counted). At first this was annoying, but with the horns playing in the background, the song sounds like an anthem so it kinda fits.

You remember when I said it’s law that street Atlanta rappers have to get a verse from Gucci Mane? That same thing could be also said about 2 Chainz. Tity Boi makes an appearance on “Dead” and even though he has the shortest verse, he fits right in.

Sidenote: Takeoff references Kurt Angle in his verse (“Block on lock, call me Kurt Angle”). Combine that with their song “Jabroni”, and I think the Migos are secretly wrestling fans. Also, listen to The FRO Horsemen.

11. All Ass
Produced by Purps
This is a song for the strip club. It was made for the strip club. Besides being titled “All Ass”, there is even a reference to strippers on the hook (“Stripper girl shakin’ all ass on the pole”). So if you like or dislike songs made for strippers, apply those feelings to “All Ass”. Don’t be surprise if your WCW is twerking to this on Instagram soon.

12. Kelly Price
Featuring Travis Scott; Produced by Cash Clay Beats & Deraj Global
This feels like “Kelly Price” is a Travis Scott song to the point that I thought he was on the hook when it was actually Quavo. That’s maybe due to the Auto-tune singing because it’s a LOT of it on this song. I’ve never been a big Travis Scott so I wasn’t feeling this song that much. It did contain a funny line about a woman “eating molly like it’s rice” but that’s about it. Naming the song after “Kelly Price” also makes sense both Travis Scott and Migos have a history of naming song after singers.

Sidenote: From a non-old negro perspective, this is GQ-Blu‘s favorite song. *shrugs*

13. Out Yo Way
Produced by Purps & Cassius Jay
Playing tribute to the women in your life use to be a trend in Hip-Hop. From the hook alone, I actually thought “Out Yo Way” was a tribute to the mothers that birth Migos (“You always going out your way, you never ask me to repay”). But after that, the first line on the first verse is “I won’t ask the bitch unless she going’ get it”. So I’ll just assume is for the non-relative women in their lives. The production here seems paint by numbers or even a slight reach at a pop record, but at least it’s a slight change from typical view of women on this album.

Like most Migos’ project, Culture is best consumed in doses. The album contains some notable tracks, but the themes and production sound too similar, you’ll swear that some songs are repeated. But in the right setting, songs like “T-Shirt” or “Call Casting” will fit right in during a night out (I’ve also been told that Migos is great gym music).

I’ll also like to point that while Takeoff, Quavo, & Offset aren’t lyrical giants, they may have the best use of flow in this new generation of rap. Some of the rap lines may falter but the way Takeoff, Offset, Quavo blend their voices, flows, and delivery show talent.

The question I posed at the beginning of this review was if Culture would continue the rise of Migos. The answer to that question is yes. While this won’t live on my “Best of 2017” list, this will give new and old fans of the Migos exactly what they are looking for. While Culture won’t put Migos up there with the likes of Drake, Kendrick Lamar, or J. Cole, it’ll continue their momentum (Proof of this is the recent announcement is that this album is currently #1 on the charts). It’s probably stupid to wait for the Migos’ wave of success to end at this point; they have already proved that they’ll be around for awhile.