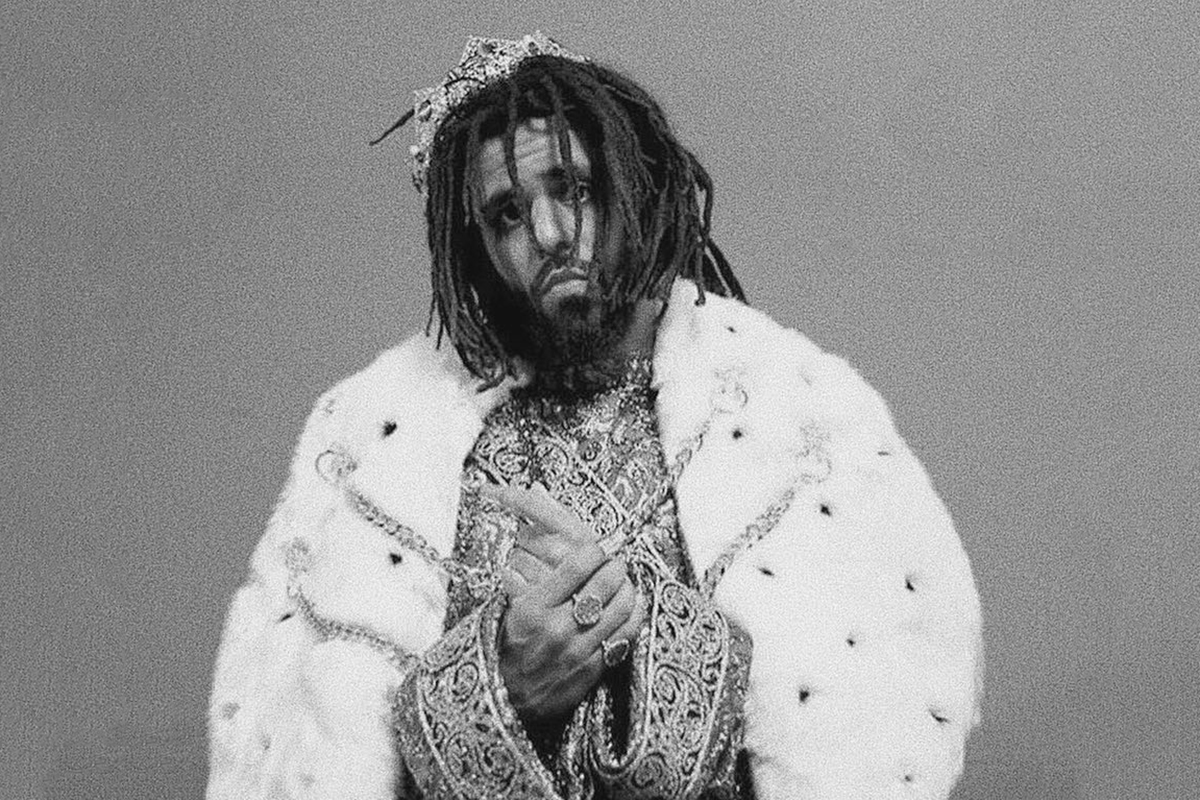 The memories of The Come Up, The Warm Up, and Friday Night Lights are still embedded in my brain after all of these years and at the time were the catalysts for what I believed would end up being a career that embarked on critically acclaimed albums, numerous Grammy awards, a Pulitzer Prize, no wait….that’s Kendrick Lamar.

Instead, since Cole has been releasing projects commercially, they have been a combination of contrived themes and narratives and sonic ambien. Where, the grandeur and urgency I got from his earlier works, felt more scattershot throughout his four commercial albums and his content becomes watered down, unable to reach its full potential. He’s had decent joints, they just fall short of the “classic” label that we on the outside looking in know he is capable of, while his fan base is so eager to attach that title to albums such as 2014 Forest Hills Drive, due to the albums having no features and the majority of the production is all done by Cole himself.

So, here we are, the follow-up to 2016’s 4 Your Eyez Only, with KOD. An acronym for “Kids On Drugs” or “King Overdose” or “Kill Our Demons”. Yep, it’s one of those albums. It also continues the tradition of announcing an album is coming out and days later, it’s for the world to stream. So, fingers crossed, will Jermaine finally come through with that classic album that he is long overdue for? Let’s find out!

1. Intro
Produced by J. Cole
There is a voice….an angelic one to be specific…and throughout it’s telling me….“Choose wisely…”

2. KOD
Produced by J. Cole
This is the true start of the album, which instrumentally is his take on the trap/hi-hat heavy sound that is soaking up much of today’s landscape in rap. I am thrown off a little bit because this album has a loose concept of what I believe is addiction and everything that supports it, but the first verse is Cole staking his claim that he will never have a feature on his albums…ever…ever…EVER EVER EVER!!

In the second verse, he does bring it back to the theme, somewhat by describing the effects drugs have had on his childhood. It’s a decent start, but nothing too special.

3. Photograph
Produced by J. Cole
If you have a Tinder account still, this is your story and your anthem. Ummm…yea…I have no idea what this has to do with drugs. I mean, I guess…social media can be for better or worse, especially when it comes to falling in love.

During the refrain, he is once again imitating these mumble rappers. I’m not sure how to take that. It’s aight. It’s hard to ignore the flaws.

4. The Cut Off
Featuring kiLL edward; Produced by J. Cole
This is why I wish Cole would have features again. I feel like someone could have executed this “kiLL edward” feature/alter ego way better. Though sonically, it sounds like Jermaine is already in his high. Cole’s verse details the strained relationships that take place due to doing more for others than you would yourself. That’s something that can speak to a lot of people that feel that unnecessary heavy burden on their shoulders. Okay track, minus that hook.

I wanna be excited about this song, but this doesn’t make me want to move my hands around like I have rainbow hair or some form of colored dreads and move my hands like I’m having a seizure and a battle with the Holy Ghost at the same damn time. It just says oh…J. Cole is trying to make a banger but forgot to make it exciting or lively. So yea, the hook is kind of redundant, but the theme around money and for others need to show it off in excess is pretty dope.

6. Motiv8
Produced by J. Cole
This is a companion piece to “ATM”. It’s like I’m trying to bounce to it and whatnot but I don’t know…I’m not “motivated” to. Get it?

So in his verses, Cole weaves in the topic of cheating on your partner, in this case with drugs, while taking a moment in time, to lyrically defecate on Kevin Hart’s personal drama.

8. BRACKETS
Produced by J. Cole
This has a Forest Hills Drive/4 Your Eyez Only feel to it. Where I was opposed to his singing in previous tracks, I like the “whoa’s” that make up the hook.

Clever interlude in the song, where he is talking to his uncle. The song is called ” BRACKETS”…..we know which uncle that is.

The second verse is the highlight where Cole waxes poetic on how flawed the American tax system is and the effects it has on underprivileged families and such. After this tax season, I feel this song soooo much. Word to J. Cole on this one, I’m woke now.

9. Once An Addict
Produced by J. Cole
This is probably my favorite song on the album. With a familiar sample as the backdrop of Cole giving a glimpse into the relationship between him and his mother as alcohol plays as a catalyst for her depression and addiction.

Mama ain’t recover yet
Callin’ me at 12 at night
She drunk as fuck and I’m upset
‘Cause why she always using me for crutch?
Growin’ up I used to always see her up
Late as shit, cigarette smoke and greatest hits from Marvin Gaye
She kill a whole bottle of some cheap chardonnay
I gotta leave this house ’cause part of me dies when I see her like this
Too young to deal with pain
I’d rather run the streets than see her kill herself
So ‘Ville became my escape from a feelin’ I hate
Mama cursing me out
Depression’s such a villainous state
I used to stay out later on purpose
Subconsciously I was nervous that if I came home early then what would surface was her inner demons
And then I’d have to end up seein’ my hero on ground zero

Somber yet powerful, you could almost hear Cole’s voice crack as he’s rapping this.

10. FRIENDS
Featuring kiLL edward; Produced by Childish Major & J. Cole
I feel like this verse was building and building and Cole’s conviction became more and more vivid to the ear, but the ending feels anticlimactic to me. All of this, just to tell us, meditate? I don’t know, my pickiness is beginning to show but damn man, I was feeling it and then falls flat. It’s just a unrealistic view and perspective for someone who deals with the ying and yang effects of drugs.

Production takes a backseat. I’m on the fence with this one. I like it, but I don’t know….something just kind of irked me with the message.

11. Window Pain (Outro)
Produced by J. Cole
This is another heartfelt track. Accepting the blessings and being one to not take his accomplishments for granted as he reflects on how his stress could not measure up to another’s, when death, drugs and the elements that make up your community and your surroundings begin to manifest for better or for worse. As described in the chorus, help his family and his friends.

12. 1985 (Intro to “The Fall Off”)
Produced by J. Cole
The song that had everyone talking. While I applaud the intentions and it is a dope song with gems sprinkled all throughout, don’t be surprised if this falls on deaf ears with the Lil Pump’s of the world. Nothing lasts forever. Spend your money wisely.

These white kids love that you don’t give a fuck
‘Cause that’s exactly what’s expected when your skin black
They wanna see you dab, they wanna see you pop a pill
They wanna see you tatted from your face to your heels
And somewhere deep down, fuck it, I gotta keep it real
They wanna be black and think your song is how it feels
So when you turn up, you see them turnin’ up too
You hit the next city, collect your money when it’s due
You gettin’ that paper, swimmin’ in bitches, I don’t blame you
You ain’t thinkin’ ’bout the people that’s lookin’ like me and you
True, you got better shit to do
You coulda bought a crib with all that bread that you done blew
I know you think this type of revenue is never endin’
But I wanna take a minute just to tell you that ain’t true
One day, them kids that’s listening gon’ grow up
And get too old for that shit that made you blow up
Now your show’s lookin’ light cause they don’t show up
Which unfortunately means the money slow up
Now you scramblin’ and hopin’ to get hot again
But you forgot you only popped ’cause you was ridin’ trends
Now you old news and you goin’ through regrets
‘Cause you never bought that house, but you got a Benz
And a bunch of jewels and a bunch of shoes
And a bunch of fake friends, I ain’t judgin’ you
I’m just tellin’ you what’s probably gon’ happen when you rappin’
‘Bout the type of shit you rappin’ ’bout
It’s a faster route to the bottom
I wish you good luck
I’m hoping for your sake that you ain’t dumb as you look
But if it’s really true what people sayin’
And you call yourself playin’ with my name
Then I really know you fucked, trust

As I mentioned, it’s a dope song, though someone can look at this and treat it as if Cole is wagging his finger and not letting these kids shine, but on the other side of the coin, I do believe that these young rappers have to be more responsible with their actions and become more aware of the influence they have on these kids.

The second half of this album, despite flaws, is perhaps the strongest set of songs and verses Cole has laid out in a long time, for me at least, while the first had its strengths and had its weaknesses whether it be within the song or the song in its entirety. Despite all of this, this is more of the same from J. Cole. There is just not a lot of songs on this album that I really want to go back to and that is a shame because for someone as talented as he is, I don’t know why there is still so much untapped potential. The ideas and concepts are commendable but what good is it if the results end up the same? Vague, repetitive, disconnected. I don’t know, maybe I will never understand why we are so high on him as we are, but until I finally get that classic project that I know he is capable of, I have no qualms in saying this…

J. Cole is Nas….with no Illmatic.