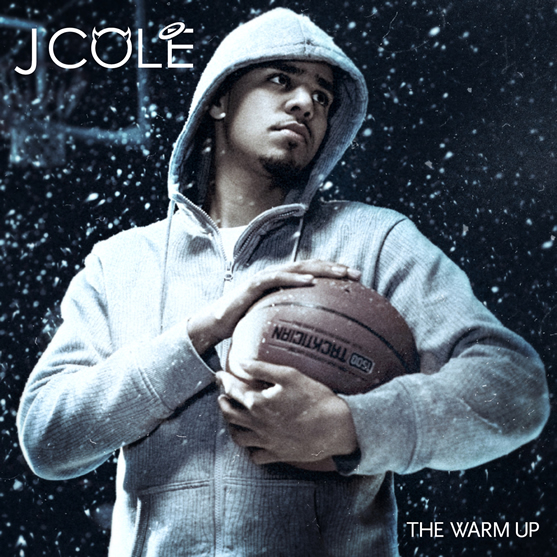 I know what you’re thinking: “Didn’t this come out two months ago?” If you were thinking this, you’d be right. But, as you may have noticed, it’s kinda slow around nappyafro (It happens). Plus we wouldn’t want to get an ass kicking from V-G (Somebody who has been riding with The ‘Fro for a minute now). Check out this dope review of Roc Nation’s first signee’s second official mixtape (Huh?). – B-Easy

Sometimes you just know something has gone awry in the Hip-Hop universe. Judging from recent catastrophes (the formation of SlaughterHouse) to unexpected earthquakes of Richter-astounding magnitudes (Drake), we are never safe. Well about a month and a half ago, J. Cole dropped The Warm-Up. Thanks to B-Easy here at nappyafro.com, I got word of the supposed follow-up to the first official J.Cole mixtape, The Come-Up. The first thing that went through my head was “Who the f%$# is J. Cole?” Shortly thereafter, “Jay signed this dude?” No screen time, no radio play, no hype, no anticipation. So I ask myself, “Who the hell cares?” I had time to find out of course, so I downloaded the material. But before my thoughts, let me address the Drake comparisons. I find some validity on the case. Imagine if Drake had got an overdose of Nas/3000 instead of Wayne… We’d have two J. Coles walking around. Both show vulnerability in their raps and seem to have a different perspective on M.O.B. than the rest of the rap world. Most obvious though, is in the introspective angles they approach their lines with. But this is not about Drake. We have J. Cole and he has something to tell you…

1. Intro (The Warm Up)
Produced by J. Cole
Over a piano solo, J. Cole lays out the concept of the tape on the age old basis of “now or never”. He speaks on “not giving up”, “being this close”, and “I finally did it”. Nothing you haven’t heard on every other mixtape/album intro…

2. Welcome
Produced by J. Cole
One of the first things I notice is his flow. Cole obsessively double rhymes, which clutches the track and doesn’t let go. The subject matter is a scattered stream of conscious that pretty much touches on any forthcoming topic. “I let these words flow out like water from a spout.” I believe he agrees with me. Fun, simple, and introductory.

3. Can I Live
Produced by Syience
From the jump this song is good and it gets better. If you’re wondering about J. Cole, LISTEN TO THIS SONG. Homie goes all the way in. His self-assessment is utterly ridiculous. He explains himself: “This is ‘The Boondocks’/ I swear yo I’m like Huey mixed with Riley/ Thursday I be tryna save the world then on Friday/ I hit the club/ Hopin that my dick get rubbed by some fat asses” and how another person (he’s referencing someone from the “Ville”) can’t live: “Like the phone when she heard the news/ her sister on the other line talkin to her shoes/ her only son, what a thing to lose/ more blacks singin more blues”. The track is also amazing. The piano and trumpet accents the maturity found here. Jay-Z “Can I Live”? Naw homie, play that J. Cole.

4. Grown Simba
Produced by J. Cole
Cole returns to the unspecified subject matter/stream of conscious as seen on “Welcome”. Song’s good. Punchlines are there. Flow is just fine. Track delivers (I dig the sample). Hook is satisfying, but nothing extraordinary. The subject hopping takes away here, but it still is really good.

5. Just To Get By
Produced by J. Cole
Freestyle? Really? This is a no hook, non-stop, shootout. Once again, nothing extraordinary, but it’s really good. Best line: “No Soprano/Half black, half white/ I’m a piano/ I’m an animal/ My video on Discovery Channel”

6. Lights Please
Produced by J. Cole
This is what I’ve been waiting for. After “Can I Live”, J. Cole went a couple songs without a real subject matter, but here he discusses how his intellect is pushed aside for sex. Introspection is found here at its finest. What makes it so enjoyable is the relation factor. I’m sure we’ve all had dumb broads that were worth it for the game. He should have got someone else on the hook, but it is very excusable. This is what I call REAL S#!+. Plies? Who?

7. Dead Presidents II
Apparently this is his second go at this beat since some dude told him he didn’t go as hard as he should have the first time around. I haven’t heard the first, but this isn’t particularly special following what I’ve heard him spit. It seems as if Cole clocks in at his best when he has a subject to focus on. Once again, this isn’t bad in the slightest, yet nothing to speak on.

8. I Get Up
Produced by J. Cole
As I progress further, I have to note that the tracks (Which are all produced by J. Cole [except 7 and 21]) are incredibly mature. This is nothing Zaytoven would give Gucci; a good and bad thing. While I could listen to the music all day, there isn’t much appeal to it. It’s basically jazz with 808’s and snare! Of all tracks, this is by far the most lackluster. It may come across as boring, I suppose. Anyway Cole speaks on why he “gets up” and how the drive to succeed resides with him, but not in everyone from the hood. Cole is able to create hooks that are “singy-songy”, but enjoyable (Word to Chamillionaire!) Very truthful and realistic approach to the “motivational” track.

9. World Is Empty
Produced by J. Cole
J. Cole quickens the pace of his flow for this one as reflected by the bouncy track. I’m feeling the sample on the hook. “Niggas rappin about how real they are usually turn out to be the fakest ones.” I couldn’t have said it better. The first verse is warm up (no pun intended), but the second verse and third are very observant. “A wise nigga told me don’t chase that cash/ follow your heart, you’ll make that fast/ Does a stripper love to shake that ass or do she wish to erase that past?” Its damn good music if you’re questioning your thinking after the song.

10. Dreams
Featuring Brandon Hines; Produced by J. Cole
The third standout track comes here and THIS SHIT IS FIRE! J. Cole’s approach is simply amazing here. The concept here is there’s this girl that has completely taken over his thoughts and he premeditates his meeting of the girl, to the murdering of her boyfriend, to getting married to the girl. Was it just me or was anybody feeling a little 3K in there? The Brandon Hines assisted hook mails this in as single material (Imagine the video!). This is the type of music I listen for. This is timeless. Listen to it.

11. Royal Flush
Here we go again… Straight stream of conscious rapping. I can use the same description for one of the earlier songs. Lyrics are hot, flow is nice, track is from “Royal Flush”. It’s good.

12. Dollar And A Dream II
Produced by J. Cole
Ok…. This song is boring. The track is soft (piano, snares) to start, the lyrics aren’t really that gripping, and the end is stupid (what is he talking about???) This song is dispensable.

13. Water Break (Interlude)
Interlude? Best interlude EVER! This is a radio freestlye is suppose (Green Lantern “On the Spot” right?). I’ll put it like this. If I would have heard this on the radio before I heard the mixtape, I would have been on my way to Best Buy to find this dude’s album. “Thought I’d get a deal and head straight to the dealership/ but lookin at my deal I prolly can’t afford benefits!” DAMN!

14. Heartache
Produced by Elite
I wasn’t really feeling this song as a whole, but I like the track and the sample. I mean the lyrics aren’t bad, he has got some quotables here, but something was missing. This is filler.

15. Get Away
Produced by J. Cole
Not feeling the track or sample on this one. Hook is cool and lyrics are mild. More filler than anything.

17. Ladies
Featuring Lee Fields & The Expressions; Produced by J. Cole
Whew… This is refreshing after THREE filler tracks in a row. We know what this one is about by the title and here Cole doesn’t digress. The tracks and the song go perfect together and the hook assistance makes this well worth the listen. The ending is enjoyable as well.

19. The Badness
Produced by J. Cole
DAMN… “Believe in god like the sun up in the sky/science can tell us how/ it can’t tell us why/ I seen a baby cry/ seconds later she laughed/ the beauty of life/ The pain never lasts/ The rain always pass/ the sun don’t always shine/ When it’s gone I’m lonely/ but when it’s there I’m fine/ I hate the winter time cause the nights come quicker/ the light make the whites think I’m a nice young nigga/ But at night they think twice and walk a little faster/ Funny, a hundred years ago I woulda called this nigga master.” Limewire, Youtube, zShare, something! Find this song. Enough Said.

20. Hold It Down
Produced by J. Cole
First off, I love this track. It’s somber and allows that introspection and vulnerability to show. The hook is great. Like I said earlier, J. Cole can make a good hook for himself (Peep game Chamillionaire!) and he doesn’t disappoint here. This song makes me feel a little better about leaving my homies for college. Nice Song.

21. Last Call
J. Cole hops on Kanye’s “Last Call’ and was as comfortable as Kanye was on the track. It’s no “Can I Live”, but it’s good. There’s a three minute speech at the end… Skip that part.

22. Losing My Balance (Bonus)
Produced by J. Cole
I’m curious as to where this track and sample came from… It’s from a genre far from Hip-Hop I’m sure, but Cole makes it work. Once again, he delivers on the hook and the lyrics are meaningful. I really like this one.

Bottom Line:
I guess it’s safe to say; the Hip-Hop world has a new problem. J. Cole is akin to global warming. It’s not going to immediately kill us, but with the right contributing factors, it’s going to get hot as hell. My main gripe here was the filler songs that were increasingly noticeable in the latter part of the mixtape. Had J. Cole dropped about 5 tracks off here, this would have been a flawless play through. No matter the case, when Cole is on topic, he is FLAME. The bumps in the road for this artist are going to come with the fight for radio play (He’s not very commercial) and against himself to stay on some kind of topic (He gets boring when he’s aimless). But overall J. Cole has the potential to stand among the GOATS. He’s is an absolute beast at his best. Like B-Easy already wrote, this is a must have mixtape of 2009. Oh yea… why isn’t J. Cole on BP3? Jay might be scared of another “Renegade”.