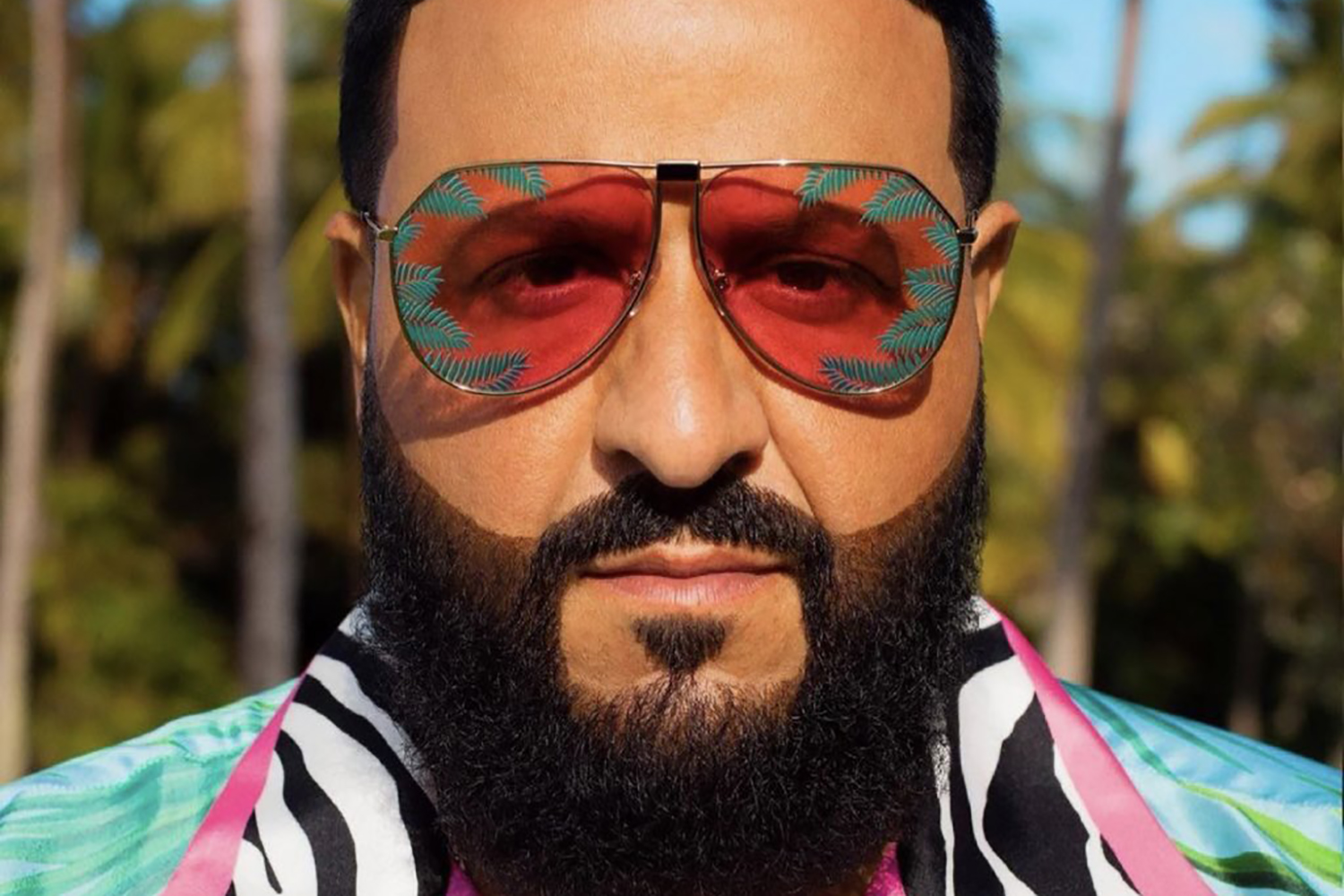 It didn’t cross my mind until doing this review that DJ Khaled has been steadily putting out albums since 2006. To even show how nappyafro is, we reviewed his second album, We The Best, all the way back in 2007. I say that to point out that DJ Khaled’s formula of using his rap connections to make superstar feature-packed songs has been in effect for eleven albums with the twelfth album being the subject of today’s review: Khaled Khaled.

DJ Khaled wasn’t the first big-name DJ to use this formula of releasing cameo heavy mixtapes, projects, and albums. DJs like Funkmaster Flex, DJ Clue, and DJ Kay Slay (just to name a few) had done the same thing to some success. But DJ Khaled has had the most success and even upgraded it to an extent by even getting features from huge names like Rhianna, Justin Bieber, & even Beyoncé.

But after fifteen years of releasing albums and upgrading the roster of features, how long can DJ Khaled keep this up to success? Let’s find out and check out his latest release, Khaled Khaled.

1. Thankful
Featuring Jeremih & Lil Wayne; Produced by DJ Khaled & NOVA WAV
I remember Khaled doing an interview for his last album Grateful and him saying that with “Wild Thoughts” he always wanted to do a song that sampled “Maria Maria” by Santana & The Product G&B. I feel with “Thankful” he said the same thing but with Jay-Z’s “Heart of the City (Ain’t No Love)” (which actually samples “Ain’t No Love in the Heart of the City” by Bobby “Blue” Bland).

I don’t mind this as the album starter and it makes sense even though it feels uninspired production-wise. I was disappointed with Lil Wayne’s verse at first seeing as much as he likes rapping over Jay-Z instrumentals in the past. But on further listens, it’s okay.

2. Every Chance I Get
Featuring Lil Durk & Lil Baby; Produced by DJ Khaled & Tay Keith
I’m gonna go ahead and admit that I have never been a big fan of Lil Baby or Lil Durk. I have liked certain songs by each rapper but not enough to be excited about this song.

I won’t say the Tay Kieth led production is bad but it’s just enough. Same goes for the subject matter (Going hard not matter what) to the melodic verses from both rappers. The song should still be serviceable for cars with good sound systems and the young folks.

3. Big Paper
Featuring Cardi B; Produced by Tay Keith & DJ Khaled
This track was way better than expected. Cardi B’s contribution to Khaled Khaled has the Bronx rapper calling out her haters over a fast-paced beat. I was describing this someone and the best description I came up with was that “Big Paper” feels like it could be on a DJ Clue or Funkmaster Flex mixtape back in the late ’90s. Who would have thought the first straight rap song would come from Bardi? But here we are. And it works.

4. We Going Crazy
Featuring Migos & H.E.R.; Produced by DJ Khaled, Cool & Dre, & Kent Jones
More stunt production from Khaled and then time it’s H.E.R. and the Migos over a reggae-infused version of “Dey Know” by Shawty LO (R.I.P.). Meh. Weirdly enough, this is basically a H.E.R. song with Takeoff and Quavo doing cameo verses towards the end. I kinda hate that fresh after H.E.R. winning a Grammy and an Oscar, this is the next big thing we hear her on. She deserves better. At least the music video has a Game of Thrones dragon in it.

5. I Did It
Featuring Megan Thee Stallion, Post Malone, DaBaby, & Lil Baby; Produced by Ben Billions, NOVA WAV, Joe Zarrillo, DJ 360, Tay Keith, & DJ Khaled
The patented superstar posse cut from Khaled here. Post Malone does the chorus while Megan Thee Stallion, DaBaby, & Lil Baby provide the verses. And it’s alright. Nothing to match previous posse cuts like “We Takin’ Over” or “All I Do Is Win” but like I said, it’s alright. The production samples “Layla” by Derek and the Dominos so that’s something.

6. Let It Go
Featuring 21 Savage & Justin Bieber; Produced by Al Cres, SkipOnDaBeat, & DJ Khaled
So who idea was it to put Justin Bieber and 21 Savage on the same song? It feels like 21 has been trying to go pop for a second (He just recently did the them for the upcoming Saw movie) and this might be the peak. He is on a song with Biebs. And while even I can admit that Justin Bieber can put out a hit, this isn’t one.

Then again you never can tell with these things but it feels like Khaled was really trying to make a pop hit with this one. I can’t blame him though. It seems like Bieber is game to collab with Khaled a lot so why no go for that Billboard Hot 100 money?

7. Body In Motion
Featuring Lil Baby, Roddy Ricch, & Bryson Tiller; Produced by STREETRUNNER, Tarik Azzouz & DJ Khaled
So Lil Baby has been on three songs already on this album and we are on track #7. Just an observation. I actually don’t mind this song; the Bryson Tiller parts at least. That’s not me shitting on Baby and Roddy Rich’s verses but it feels like they are just interrupting a Bryson Tiller song. They should have just let him have the song solo.

8. Popstar
Featuring Drake; Produced by DJ Khaled, OZ, & DAVID x ELI
It feels like this song came out in 2019 but it really came out on July 17, 2020. It feels kinda old to be on this album but with streaming numbers and a Drake song, I understand it business-wise. Not gonna say too much about this song because I am sure you have heard it before and seen the music video starring Justin Bieber. Wait, instead of the Bieber song earlier, why not just do a remix of “Popstar” with Drizzy and Biebs? Is that a crazy idea?

9. This Is My Year
Featuring Diddy, Rick Ross, Big Sean & A Boogie Wit Da Hoodie; Produced by STREETRUNNER, Tarik Azzouz, & DJ Khaled
I honestly didn’t need to hear A Boogie Wit Da Hoodie and Big Sean rap over Puff Daddy & Biggie’s “Victory” but here we are. It even has Diddy ad-libbing throughout the whole song although I didn’t mind the shit-talking at the end; hell that might have been the best part. I’m pretty sure this all started with DJ Khaled saying he wanted to remake “Victory” with Rick Ross and Diddy (which might have been a better version) but some kind of why we got Big Sean and A Boogie Wit Da Hoodie on there too. Meh.

10. Sorry Not Sorry
Featuring Nas, Harmonies by The Hive, James Fauntleroy, & Jay-Z; Produced by STREETRUNNER, Tarik Azzouz, & DJ Khaled
It’s a reason why DJ Khaled lead with this song for this project (The two Drake songs were actually the lead single but that was almost a year ago). Not only for the huge billing but it is the best song on the project. Nas and Jay-Z both turn in good verses that sound well crafted, inspired, and experienced.

That’s not to say this is a perfect song. James Fauntleroy’s hook can come off boring and I don’t know why they put a filter on his vocals. And why is Beyoncé listed as Harmonies by The Hive and she listed at all since only said one word (“Hey”)? That doesn’t make sense. Also, am I the only one that is hearing “Song Cry” on this production?

After all that “Sorry Not Sorry” is still the best track off Khaled Khaled.

11. Just Be
Featuring Justin Timberlake; Produced by NOVA WAV, STREETRUNNER, Tarik Azzouz, & DJ Khaled
So these are the Justin Timberlake vocals that DJ Khaled was going crazy over? Really? Justin Timberlake singing over “All That I Got Is You” by Ghostface Killah & Mary J. Blige aka “Maybe Tomorrow” by The Jackson 5? The visualizer for this song has DJ Khaled playing this song for Swizz Beatz and Timbaland. He should have scrapped this and let Timbo do something else with Timberlake. Not only is this kinda boring but it also dated.

12. I Can Have It All
Featuring Meek Mill, H.E.R., & Bryson Tiller; Produced by NOVA WAV, STREETRUNNER, Tarik Azzouz, & DJ Khaled
H.E.R. and Bryson Tiller reappear on the album with a verse from Meek Mill so they can all rap and sing over “Feel It in the Air” by Beanie Sigel. Maybe I missed something, but why is Bryson Tiller only on the first 25 seconds of this track?

You know how you hear a sample of a song and all it makes you want to do is go listen to the original? That’s the situation here. I want to give it a pass because “Feel It in the Air” was never properly mastered correctly. This is not terrible but something just feels off.

13. Greece
Featuring Drake; Produced by Peter Eddins, Elijah Dax, & TIGGI & OZ
The second Drake song that was also released in July of last year. Between “Popstar” and this, “Greece” was the lesser of the two (I guess why they never gave this a video while “Popstar” starred Justin Bieber).

I may have said this during its initial release but “Greece” always felt like something Drizzy did during album mode but didn’t want to use it so he gave it to Khaled. It’s not bad but it’s kinda weird on a collaboration happy DJ Khaled album. But I do understand that you have to put this Drake song somewhere.

14. Where You Come From
Featuring Barrington Levy, Bounty Killer, Capleton, & Buju Banton; Produced by 9th Wonder, STREETRUNNER, Tarik Azzouz, & DJ Khaled
I’ll give it Khaled: He will always have at least one reggae song on his albums. And even though it won’t make a lot of noise compared to other songs, he will probably make a music video for it too.

I have never been that into reggae so I this isn’t my thing. I was surprised to see 9th Wonder’s name in the production credits.

And that’s the end of DJ Khaled’s Khaled Khaled.

You have to applaud DJ Khaled for his continued grind. He is constantly promoting and constantly on the lookout to secure big-time vocals for his next album (“The Obama vocals are in!”), but at this point, we have seen this all before. On Khaled Khaled, the names may get switched out with hotter/newer names (Bye Plies, T-Pain, and T.I.; Hello Lil Baby, Megan Thee Stallion, and Roddy Rich), but nothing really changes from the formula. That also includes using instrumentals and samples from previous Hip-Hop hits that can come off as dated and somewhat empty.

On a more positive note, there are some bright spots here too. The “Popstar” by Drake is still a cool listen. The Nas and Jay-Z-led “Sorry Not Sorry” is the main event even though it probably won’t top the singles charts. If you are a big fan of Lil Baby, he shows up multiple times throughout this album.

I don’t see DJ Khaled stopping anytime soon and it wouldn’t surprise me if we get albums from him for the next five years or more. And why shouldn’t he if it continues to work for him? The thing is, if he continues to release unoriginal and uninspired projects like Khaled Khaled, I’m not sure if the world needs another one.