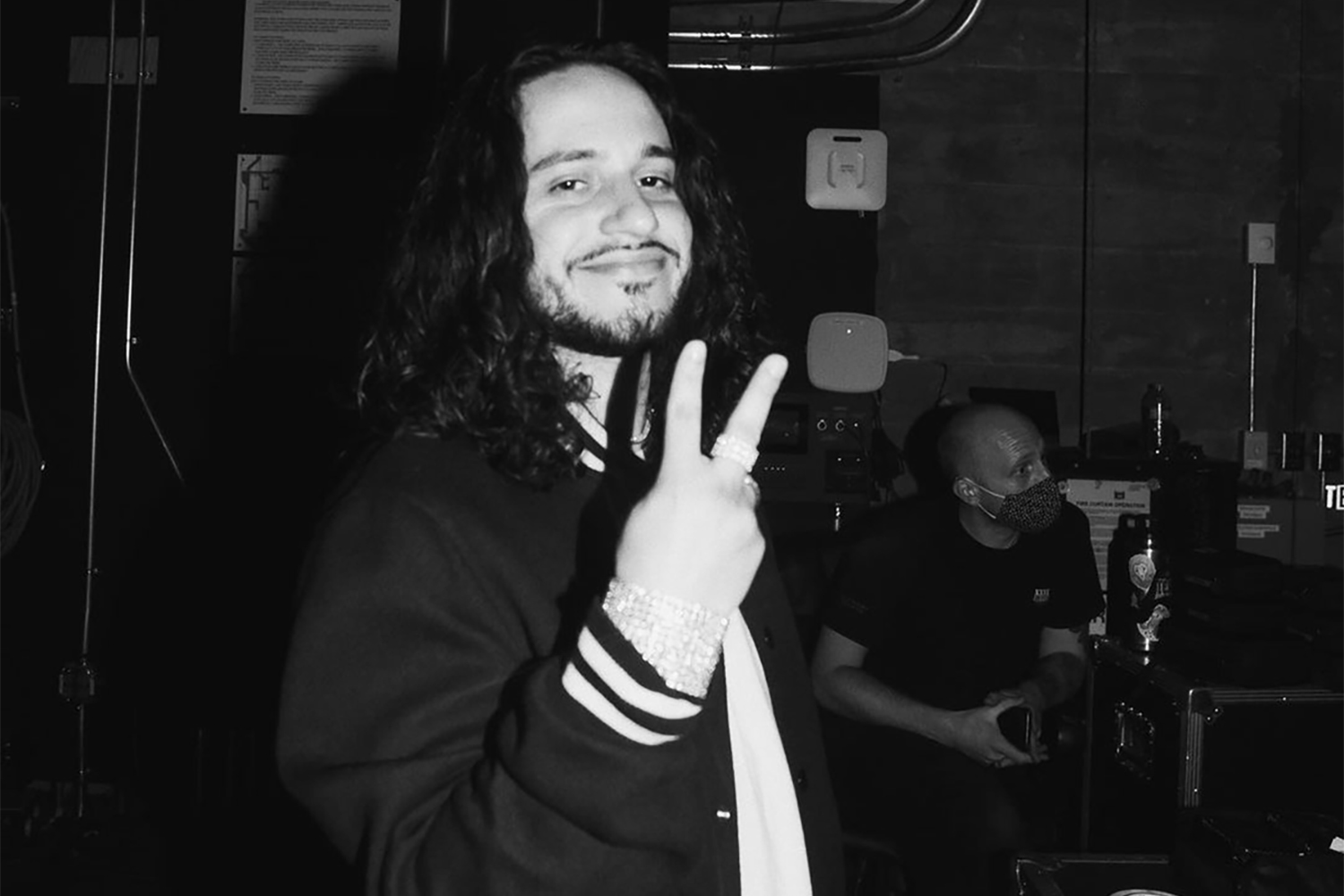 I am not going to lie to you here. This is my first time listening to a Russ song, let alone a Russ album. I don’t have an issue with Russ personally or artistically, but I just feel like his self-made gimmick of doing all the rapping, producing, mixing, engineering, marketing, whatever else he is willing to tell us, was not enough to intrigue me to listen to him. In addition to this, watching every YouTube music critic I follow just verbally defecate on him every chance they got was most definitely not going to get me to check his stuff out. I viewed him the same way I viewed (Insert white rapper here), irrelevant to my worldview outside of the bullshit I would hear about him saying and doing on a regular basis. Russ always came across to me as the guy that wants to be invited to the cookout, but BITCH AIN’T NO COOKOUT!!!

Then came his CHOMP EP of last year. Released on Thanksgiving week, it was a small batch of songs that had Russ collaborating with some lyrical heavy hitters such as Benny The Butcher, Ab-Soul, and more. A year later, we find out Russ is releasing an album as volume two of his series. When I saw the tracklist, I hit up Easy with much curiosity and fear of listening and reviewing this. Am I going to like a Russ album? Let’s find out with CHOMP 2!

1. Sheep
Produced by Jake One
The Jake One instrumental is a laid-back one. Very smooth and leaves room for one to be introspective. While the verse from Russ is nothing to throw a parade over, it is something that can get a pass over a beat like this. Lines that stand out are:

I love my girl but weddings scare me
I can’t fight the force, my dad is twice divorced, might be hereditary

2. Blue Chip
Featuring Ransom; Produced by dEnAun
Now this is the test. To see how Russ can hold over a seasoned veteran spitter like Ransom. To be fair, Russ’s verse isn’t bad but compared to Ran.

Ransom low-key is in my top 5 spitters of the year, if you didn’t check out Heavy Is the Head, Seven, or Coup de Grace from this year alone, make sure that you do! Mr. Porter, one of the most underrated producers in the game, drops a head-nodder on this one. This joint knocks!

3. Bucket Hat Low
Featuring Papoose; Produced by Russ
Russ following Mr. Porter in how to make a beat knock, because this one does. Russ once again holds his own in the song with a couple of good lines in there.

Couple homies Blood, but I invested in some Crypto

But Papoose…Pap came in ready to murder.

Heard you was a straight A student, that’s a clever score
But you gon’ get a D minus every time that we test your jaw

Don’t let that heart go to your head, Drake haircut

4. Nothin’ New
Featuring The Game; Produced by Hi-Tek
It’s only fitting that The Game is on this track because this Hi-Tek beat sounds exactly like something he would give him for The Documentary. This is another song where Russ is holding his own against a heavyweight and this is the best The Game has sounded in a minute. Solid cut. However, that Hall & Oates sample just randomly thrown at the end…no.

I feel like the one, I can’t be worried ‘bout top threes

But anyways, Russ sounds cool over 9th Wonder’s soulful production. Now as far as Westside and Styles P. I don’t know, they have sounded better than this. Not that their contributions were bad, but it just wasn’t anything memorable to me. Over this production, they could have gone harder than they did, but that’s just my opinion. Although, I will give Westside a thumbs up for shouting out JJ’s!!!

6. Faith
Featuring Jadakiss; Produced by Russ
Six tracks and I’m like “What the hell, am I going to like a Russ album?”

Another track that bumps and Russ continues taking the time out to sound like he is actually somebody that people want to remember. Jadakiss continues his streak with a dope verse and reminds me that if only Kiss had that ONE classic album, with production like this…what could have been. Dope song.

If you can rap well over a Preemo beat, you will win the old heads over.

All three do their thing on something that is a little somber in tone, but celebratory and explaining their definition of freedom, whether it’s K.R.I.T. celebrating his major label independence, or Snoop kicking back after being in the game, for now, FOUR decades. In addition to Russ shouting out Snoop and reaping the rewards of being self-made.

8. Top of the World
Featuring Jay Electronica; Produced by Harry Fraud
The Harry Fraud beat is smooth, but the verses are kind of “meh” for me. Moreso, for Russ repeating lines he already said in other songs (“the Bloods line and the “I look like Jesus”) and Jay Elec basically rapping a “Jay Electronica Type Verse”. It’s okay, but skippable.

9. Note to Self
Featuring Hit-Boy, Joey Bada$$, Wale, & Big Sean; Produced by Hit-Boy
Out of everything so far, I think I can call this my true highlight of the album. Hit-Boy staying undefeated for the year with a King’s Disease-esque instrumental and everyone dropping quality bars, with my favorite coming from Big Sean.

Niggas want loyalty without showin’ loyalty (How?)
King shit, I want the royal treatment and royalties

If you watched Big Sean’s Drink Champs episode, then you know what and WHO he is referring to. Wale was passable and Joey Bada$$ sound like he ready to school these emcees once he’s done acting and all.

10. Hustler Freestyle
Produced by Jake One
This Jake One makes you want to sip some wine and smoke a cigar. Well, I on the other hand am drinking a Manhattan, and I don’t do the latter so what can you do?

Russ presents a somewhat melodic or bouncier flow, but he isn’t saying anything special. Although he did label it a freestyle, maybe I was expecting more from him on this beat. This sounds more like something Ghostface would get on.

I don’t think Tony Starks has rapped over an Alchemist beat since maybe “The Forest”? I don’t know, B-Easy, leave an editor’s note if you can (Editor’s Note: It may be Ghostface’s feature on The Alchemist produced “Weight” by Swollen Members in 2006). Either way, his verse made me yearn for a Ghostface/Alchemist EP…maybe an album?

Anyway, this was the song I had my eye on the most. I had no doubts for Ghost and Machine, but this album and me listening to Russ for the first time is about whether he can hold his own on these songs. And he does, but here is the issue.

He is starting to repeat himself.

12. Get It
Featuring CyHi The Prynce & Lloyd Banks; Produced by Statik Selektah
Remember when I said Russ is repeating himself???

Why does Russ keep mentioning Bloods??? Is Russ Blood???

This song wasn’t really hitting for me like that and then here comes Lamborghini Lloyd. I’m so glad Banks got a second wind in this rap shit, because in this lane that cats like Gibbs and Griselda have formed, he would fit right in. Outside of Banks’s verse and Statik Selektah’s beat, this is a skippable one.

13. Enjoy the View
Featuring Mozzy; Produced by Bink!
This has got to be the reason Russ keeps mentioning Bloods…

…he owes Mozzy a favor.

Anyways, another skippable track. Mainly, because out of all the hooks that are here, this is to me, one of the lazier ones and neither emcee (while I fuck with Mozzy) aren’t really saying anything that stands out.

14. Golden
Produced by Allen Ritter, Khristopher Riddick-Tynes, Don Mills, & Boi-1da
This Boi-1da beat makes me wish Drake would cut the bullshit and actually start to fucking RAP again! But either way, it starts off a standard Russ track and then at the second verse, Russ gets into a pocket and starts to really flow. Internal rhymes, external rhymes, what. In. The. Hell? Good way to close the album.

So, my first experience listening to Russ was a better one than I had expected it to be. Chomp 2 is nothing to sleep on as it is a project that reminds you of the Hip-Hop of yesterday and Russ knew exactly what he was doing on both volumes as he brought on emcees that are respected amongst the game.

Here is the issue with this. As gratifying as it is to hear these emcees and producers on these records whether they are our current favorites or veterans we haven’t heard in a while, the cynic in me can’t help but feel like this is a tad bit of a novelty.

We know that the next Russ album is not going to be anything like what we heard on this one especially when there was nothing to gravitate towards on any of Russ’s past projects. Respect to Russ for putting this together, but is this going to make me listen to Russ outside of the CHOMP series? Probably…more than likely…no.

But I can appreciate him wanting to step up and show out with the greats to release a decent album with a couple songs that I have no problem taking into 2022.