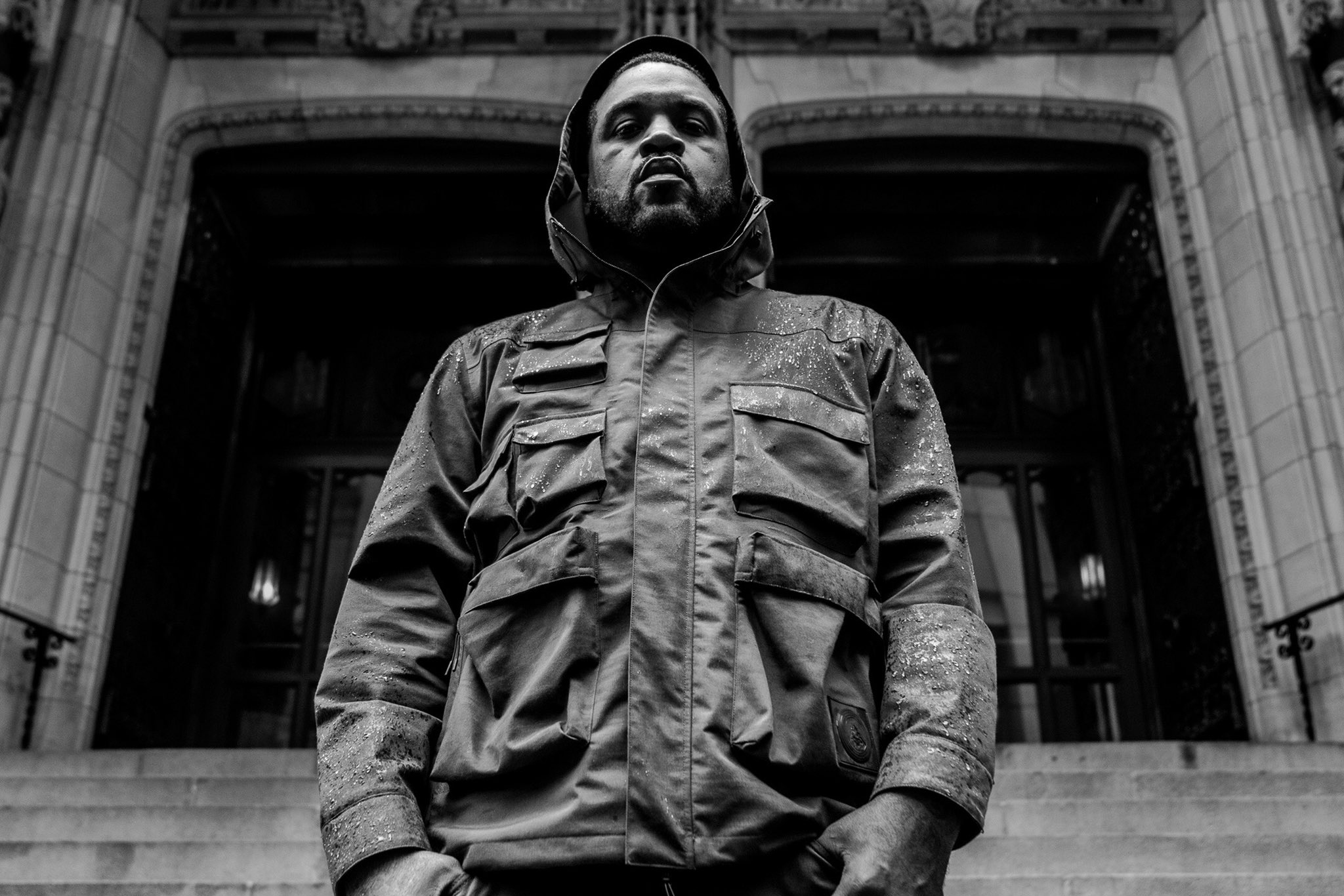 During the peak of G-Unit’s popularity, it’s not that I found Lloyd Banks to be overrated, but rather I found him inessential. Don’t get me wrong; I have fond memories of being in the club, dancing with a shorty while “On Fire” blared loudly through the speakers. I remember religiously listening to “I’m So Fly,” and the knock of Timbaland’s production inspired me to want to rap over the instrumental and make a mixtape (that didn’t happen until years later). Even to the point where people said The Hunger For More was the best rap album of 2004 (Yes, the year of The College Dropout, Madvillainy, etc.).

This time frame is definitely where Banks would peak as his second studio album failed to capture that hitmaking magic that the first album had and at a time when G-Unit as a whole began to lose its luster due to infighting and Hip-Hop steering away from the east coast in exchange for ringtone rap, the south, and anything Kanye was doing. Banks would have one last hint of relevance courtesy of his Juelz Santana-featured “Beamer, Benz & Bentley.” A mixtape or two later after and Banks would head into the shadows as we wouldn’t get another album from him for 11 years.

When it was announced that The Course of the Inevitable would drop last year, I was intrigued but not overwhelmed with excitement. After all, street rap has gone through many shifts and changes during the time he was gone, and now it was a matter of where exactly he’d fit in without sounding like he is from a bygone era like so many of his contemporaries. I think that led to me not listening to it outside of a couple of songs. However, now that the second volume is out, maybe it’s time I stop procrastinating and see what Lamborghini Lloyd has been up to.

1. Impact
Produced by Cartune Beatz
The song seems to be about Banks coming off hiatus and how everything has changed around him. The production sounds exactly like what a rapper like Banks would hop on. Gritty, grimy, and hardcore that sounds a bit dated but not enough to not make you nod your head. As expected, Banks’s flow and rhyme schemes are on point, but the hook leaves a little to be desired.

2. No Reward
Produced by Cartune Beatz
The beat is kind of lackluster, but I suppose that is by design as it allows Banks’s verses to have more light on them. The second verse is where Banks hits the gas and doesn’t let up, making this song a highlight on the album so far.

3. Menace
Featuring Conway The Machine; Produced by Cartune Beatz
When it comes to grimey NY Hip-Hop, it is almost as if Banks had to crawl, so acts like the Griselda crew, Ransom (he’s Jersey, but it still counts), Rome Streetz, and more could walk. This beat is the perfect backdrop for Banks and Conway The Machine to throw warning shots at their opps. Conway talks the most shit here, and with the year he’s had with nothing but bangers, it’s quite convenient.

4. Living Proof
Featuring Benny The Butcher; Produced by Cartune Beatz
You can take everything I said in the first two sentences for the last song and put them here except replace Conway with Benny The Butcher. I feel like Banks is doing two verses in his collab tracks to avoid potentially getting outshined on his own song, but the extra verse doesn’t help much on an already decent song.

5. Value of a Check
Produced by Fruition Beatz
The production here sounds like it would come straight off a G-Unit radio mixtape. This track was a let-down kind of, with Banks incorporating the same flow and the same rhyme scheme in the last few songs. Five tracks in, and it seems like while Banks’s pen is hitting, the songs feel one-dimensional.

6. Power Steering
Featuring Jadakiss: Produced by Mr. Authentic
A Banks/Kiss collab on paper sounds like a 2000s Hip-Hop head’s wet dream. However, the song here goes nothing past serviceable here. Banks doesn’t feel off, and Kiss is his usual consistent self, but the song doesn’t move me like I wished that it would. Maybe the production is the blame as it sounds like a Hunger for More leftover.

7. Fell in Love
Produced by Chris Noxx
So this is a song where Banks is supposedly trying to make a radio hit? I can appreciate that something finally sounds different compared to the rest of the album so far, yet the issue is that this song comes off more like filler. “On Fire” or “Beamer, Benz or Bentley” it is not, nor should I expect it to be. But maybe it is a reminder that his “hitmaking” abilities are passing him by.

This is short and to the point but doesn’t deviate far from the formula of the songs before. The more I am listening to this, the more I begin to believe there is more focus on the rapping here instead of strong songwriting. The production doesn’t help either, as it just sounds like it doesn’t go anywhere. There’s no feeling to it, and that is a shame for how well Banks is carrying this lyrically.

9. Murda One
Produced by Doe Pesci
Time for an introspective track! Well, all of them have been introspective to a point, but the production compliments the tone of Banks’s verses…finally.

It’s a small change from what we have been getting already, and it is decent enough to stay in rotation after the album’s completion.

10. Don’t Switch
Featuring Tony Yayo: Produced by Tha Jerm
Well, long story less long, this is a semi-G-Unit reunion. And yes, if y’all were wondering, you guessed it!

Not only that, but the mix on this sounds like they were recording this song only using the MP3 version of the instrumental. Also, this did NOT need to be almost FIVE MINUTES LONG. Fuck! We missed y’all, but we ain’t miss you THAT GOD DAMN MUCH! NEXT!

11. Dead Roses
Produced by Cryptic One
This is one of those songs that I suppose you can throw in the category filed under “Things Just Ain’t The Same For Gangstas.”

One line that does stick out for me is…

The 2022 version of Jada’s “You know dead rappers get better promotion”.

12. Trapped
Produced by Cartune Beatz
Again, can we get Banks on some better production? This just sounds like a 2000s mixtape leftover. I mean, Banks can rap his off all he wants but if I’m bored, does any of that matter?

13. Traffic
Featuring Vado & Dave East; Produced by Cartune Beatz
Shout out to the Holy Trinity of “Stunted Growth” all on one track. Shout out to the homie JC at Stunted Growth Music (“let’s get it!”) (Check out the episode on Banks on YouTube when you can!). Yeah, it is exactly what you expect from these three on another track with a beat that could’ve been left behind in 2006, with all three doing just fine, but no more than that.

14. On My Way
Produced by Cartune Beatz
It’s a fine track to close the album, but if I am going to be honest, this song went in one ear and out the other by the time the album finished and I have left this album…feeling…not satisfied enough.

My first time listening to a Lloyd Banks album in its entirety for the first time in more than a decade, and it felt like an appetizer that has taste but isn’t as filling. Throughout this entire The Course of the Inevitable 2, this just had me clamoring to wonder, if Banks spit like this but over some Daringer production, or Alchemist, or Nicolas Craven or Beat Butcha or Big Ghost, what would the results be? From the first couple of listens, it sounds like a paint-by-numbers version of an album that would probably be elevated by some of his other peers in the game.

I understand he’s been away for a long time and maybe this is him dusting off more of the cobwebs, but I’ve always been under the impression that you can have all the bars, but if you can’t make records, I don’t really care what you’re saying. Perhaps the next album will put everything together properly. He’s got the lyrics, features won’t be an issue, but it’s all to whether the beats compliment the rhymes better than they do here and whether these can result into more memorable songs. After all, it’s inevitable, right?