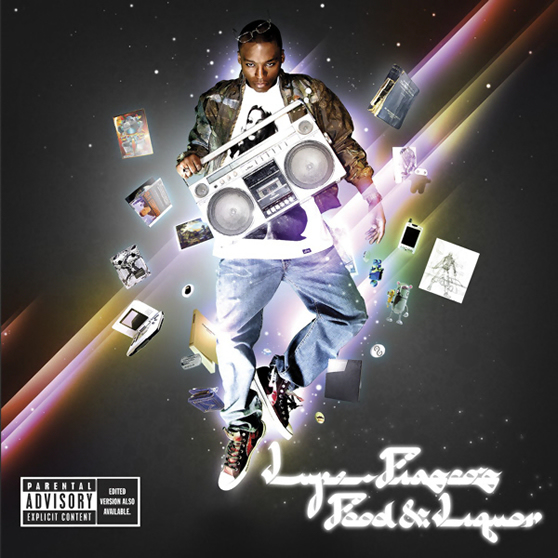 I first heard Lupe, like most of us, on Kanye’s “Touch The Sky”. He showed talent, diversity, and freshness all with this one verse, shit, he even referenced Lupin the 3rd in his rhymes man! And even though skateboarders had been banging rap music for a while, Lupe is looked at for meshing of Hip-Hop/skateboarding cultures (some would sad “Nerd Rap”) into one; Yeah, Pharrell helped do this too, but who looks at him as a MC?. When I heard of his album coming out, I was anticipating like most of Hip-Hop to see was the young Chicagoan could do. Then I heard “Kick, Push” and that shit reminded me of some new-school Native Tongues…and that’s a good thing. Lupe Fiasco was also co-sighed by the likes of Jay-Z (who later executive produced Lupe’s album), Kanye West, & Pharrell. After a few internet leaks (damn you internet!), a new and revised Food & Liquor hit stores in September 2006.

Intro
City sounds with a woman reciting a poem. Lupe comes on the end explaining what Food & Liquor means. No rapping yet but it sets the mood.

Real
Featuring Sarah Green; Produced by Soundtrakk
Lupe raps over a hard guitar loop here. It’s okay; I just never felt he never jumped on the beat. The flow he uses sounds like he never got started.

Just Might Be OK
Featuring Gemini; Produced by Prolyfic
Producer Prolyfic provides an epic track for this one. Lupe gets more into this one on the second verse. The hook is uplifting; I like this one.

Kick, Push
Produced by Soundtrakk
This was the first single for the album. I still like it now. Also I like that a rap single can still have a story, you don’t see that anymore. New producer Soundtrakk provided the beat, which is sad because a lot of people thought it was Kanye and dude didn’t get his shine like he was suppose to. Oh yea, good song though.

I Gotcha
Featuring Pharrell; Produced by The Neptunes
Who didn’t see this one coming? This was the second U.S. single (third in the U.K.). It’s average, I mean Lupe spits on excellent and everything. The Neptunes should’ve given the young MC a homerun not a base hit.

The Instrumental
Featuring Jonah Matranga; Produced by Mike Shinoda
Mike Shinoda (from Linkin Park) produced this one. I’m starting to realize that Lupe does a “backwards Mike Jones”. He starts some verses the same was he does the one before it. Not a bad thing, just a comment. I’m tired of this song but then again I probably bias. It’s on Madden ‘07, but maybe I just play it too much. The song sounds like something rock band, trying to rap, would do to me.

He Say She Say
Featuring Gemini & Sarah Green; Produced by Soundtrakk
To me this is by far the best song on the album. Lupe raps from the perspective of a mother and a son talking to a absent father. It’s some deep shit right there. Good hook and awesome beat too. It might throw some people off because he does the same verse twice but changes the she’s/he’s. Great song, you gotta check this one out.

Sunshine
Produced by Soundtrakk
Lupe comes with a love song this time. You can lay back and chill to this one. Lupe singing on the hook is suspect though.

Daydreamin’
Featuring Jill Scott; Produced by Craig Kallman
Oh shit! It’s Jill Scott! Y’all got to know I love me some Jill Scott! That’s my “big-girl baby mama” right there (I’m cheating on her with Jennifer Hudson though). Anyway, like I said before, this was the second single in the U.K. Nice beat, good hook by Jill; the song is first-class.

The Cool
Produced by Kanye West
Kanye finally comes through with a beat that doesn’t sound like he made it. Not bad, just different. The subject matter might confuse some listeners, but why should Lupe dumb his shit down? All in all it’s an okay song; once again the hook is suspect with Lupe singing on it again. To bad he couldn’t give him that beat from “Touch The Sky”…Oh wait, Just Blaze did that beat.

Hurt Me Soul
Produced by Needlz; Produced by Needlz
This one is produce by Needlz, the one who produce Young Buck’s “Let Me In”. It puts you in the mind of “Kick, Push” or “Song Cry” by Jay-Z with the beat. He raps about his love and grips of Hip-Hop. It’s average; kinda whiny.

Pressure
Featuring Jay-Z; Produced by Prolyfic
Hova shows up for this one to help Lupe moves some units. Being a Jay-Z fan I can say that Jigga gave this dude a sub-par verse. Maybe it was the beat, maybe he wasn’t feeling the song, I don’t know? Lupe also almost gets too deep and symbolic with his verses. I like the beat and some of Lupe’s lines (“And Big Homie out of retirement.”); I still up in the air about this one.

American Terrorist
Featuring Matthew Santos; Produced by Prolyfic
This is a deep song about terrorism and the misinterpretation of the Muslim faith. With Lupe being Muslim I’m sure this is a topic close to his heart. The Latin hook is weird with subject matter.

The Emperor’s Soundtrack
Produced by Soundtrakk
This is song is okay except one problem. At song 14, these songs are starting to sound the same. You might like it, but after listening to the other songs, I can’t tell any more…Okay, I listened to it after a fifteen minute break, it’s not bad.

Kick, Push II
Produced by Brandon Howard
Not so much a remix, more like a sequel to the first one. The beat is hot but the one I heard on the bootleg Food & Liquor‘s original “Kick, Push II” was better. It’s still a good narrative though, check it out.

Outro
You remember on the end of The College Dropout; “Last Call”? When Kanye takes like twelve minutes to thank everybody? That’s the same shit here, just place Kanye with Lupe. I feel him and all, but skip it.

Bottom Line:
This is basically a good quality CD. It’s gets redundant towards the end and while he shows ability, he never shows “Touch The Sky” ability. Lupe Fiasco has a lot of talent and goes where a lot of rappers won’t. I sure the Hip-Hoppers/skateboarders will rejoice with this one (Actually, I heard on Beef it was the opposite). Good job Lupe.