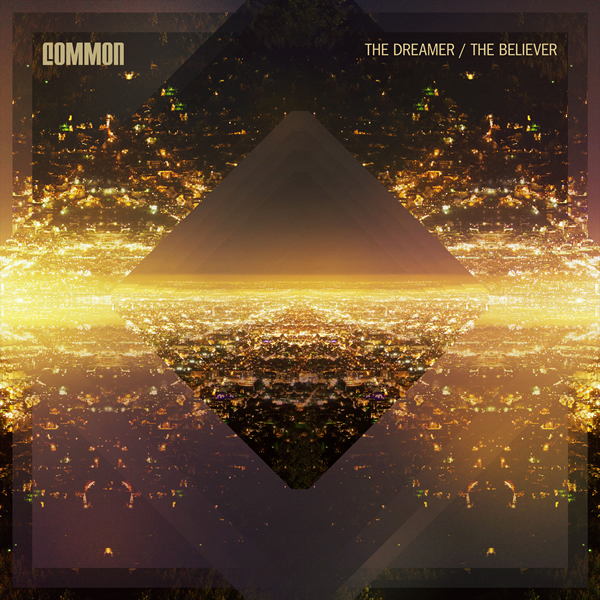 We find veteran Chi-town emcee Common Sense in a very peculiar position within the Hip-Hop game these days. Comm has a legacy of magnificent rap releases, a laundry list of major film roles, and the respect of nearly everyone within the community. Since his Resurrection days he has been a stable in rap, but of course has matured even more since his Can I Borrow a Dollar? days. Given 2005’s classic Be and the creatively awkward Universal Mind Control. His latest offering The Dreamer/The Believer is where we may find Common at his ultimate maturation; if it exists for the redefining lyricist.

As we start the album one can’t help but notice the tranquil backdrop longtime producer No I.D. provides for “The Dreamer”, featuring a revitalized Comm at his finest dropping jewels, before we hear living legend Maya Angelou grace the closing minute. With only 2 other features on the LP, Comm hooks up with Nas for one of last summer’s best tracks “Ghetto Dreams” capture golden era bars for the 2011. First single “Blue Sky” reveals Common’s still got what it takes to appeal to the masses without jeopardizing his roots, sounding very at home. Next we hear his feeling towards fellow rapper Drake on the menacing “Sweet” where his vice-grips are tightened for clarity “My name synonymous with prominence, I’m to Hip-Hop what Obama is to politics, Common is” he spits, firing shots throughout to the Young Money crooner. We reach “Gold” and this is where the album seems to find its stomping grounds, creatively, trading bars of his triumph over the classy boom bap arrangements. Comm provides insight on failed relationships and tales of heartbreak with the capturing “Lovin’ I Lost” confessing bars over the soulful sample make for a highpoint.

The tracks continue to “Raw (How You Like It)” where we find him yet again flexing bars over the melodic beat break, sounding very well rested. Second single “Celebrate” shows Comm’s casual side in the limelight with piercing keys, feel-good hook and radio ready tempo. It is “Cloth” that displays a deeply sobering, intimate reflection of the dynamics we’re faced within relationships and in each other, he laments “I recall, the walls that I had up, attracted to women for things that didn’t matter”. The track makes room for the neglected content as the hook transcends this to one of my favorite from this release. Again he brilliantly flows with notable, open verses for the seductive “Windows” where he opens up on topics such as family and intimacy “Her picture of men, we walk on all fours…can tell she was hurt by the words that she chose, I’m thinking like Lauryn, a rose is still a rose”. “The Believer” closes the album with John Legend’s harmonizing chorus as Common sends messages of a hopeful future and longevity, very epic indeed. Common’s ninth studio effort gives optimism to a pessimist and reassures the crown he chooses to only wear at home.