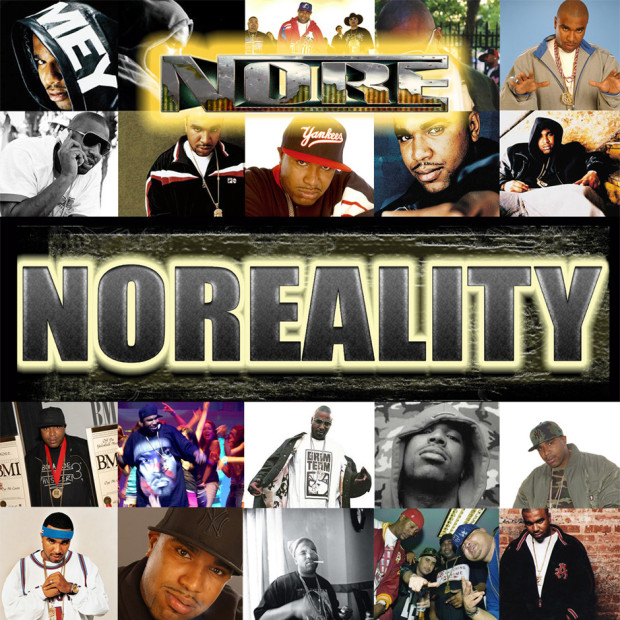 I always liked N.O.R.E.. Let me changed that, I always didn’t mind Noreaga. Yea, he wasn’t the most lyrical, I mean after the first CNN album, he really toned it down. But I never minded because you could tell N.O.R.E. was having fun (“Who gives a fuck bout, who’s lyrics is better? As long as my shit is dope when I put it together”). In the past, N.O.R.E. has found his niche and success with bouncy thug/club songs like “Oh No”, “Nothin’” and “Grimey”. After releasing a reggaeton album last year that flopped harder than Manu Ginobili, N.O.R.E. goes independent with his latest album Noreality.

The album starts off with N.O.R.E. hooking up with Swizz Beatz on the first single, “Set It Off”. It’s song like these that have Noreaga in his comfort zone. The club ready Swizz produced track suits N.O.R.E.’s humorous rhymes; “Bitches with small ass, go tell ya managers, N.O.R.E. in the building with keys, they call me janitor”. “That Club Shit” will make you think Noreaga called up The Neptunes. Yea, if they gave him a budget beat. The song is not bad, it just not a good imitation. Why is Three 6 Mafia just on the hook? Maybe for the South audience, who knows? “Throw ‘Em Under The Bus” featuring Jadakiss and Kurupt is next. It’s not a bad track, Jada does his thing. The beat gets a little redundant after a minute or so. The controversial track “Cocaine Cowboys” is next. I remember when this video was taken down from MySpace for it’s content. I actually like the track; N.O.R.E. steps up his lyrics on this one while not totally going Rick Ross (Not the real Rick Ross mind you). Capone and Final Chapter show up on “Green Light”. While the beat and hook are suspect, Final Chapter turns in a good performance. It’s an average track. The ode to Ecstasy track “Pop A Pill” is next. I could barely get by the trash hook. Skip! The Dame Grease produced and Styles P. featured “Sour Diesel” also has a mediocre hook. It’s not as bad as the last song’s hook though; the song is a tribute to weed. I wasn’t feeling it, but maybe smokers will (Yea, like we need another weed tribute). “Paternity Test” is not bad at all if you don’t take it seriously. The track is actually funny; do I really need to tell you what the subject is? On the Boola produced “I’ma Get You”, it says that it features Kanye West and GLC. I can’t even call it a feature, maybe GLC, but Kanye is barley on the track (Is saying a few layered words on a weak chorus count?). Besides that, the track is average. The craziest track on the album by far is “Eat Pussy” featuring Tru Life and Peedi Peedi. Yea, it’s a track about…um eating pussy. These dudes ain’t playing either. All three rappers talk about how they love it (Tru Life even raps; “Love to eat for I beat it, yes this is true, I’m a freak Ma, I eat more pussy that Missy do”). I really don’t have words for this track, but I guess since we have so many track about girls giving head in rap music, why not this? I will say that it’s a least a must listen. N.O.R.E. delves into his history with the music industry on “The Rap Game”. Once again, the chorus is so-so, but the storytelling is pretty good. The Alchemist produced “Drink Champ” is next and starts out with N.O.R.E. saying all the rap crews he out drank (Bad Boy, Terror Squad, Roc-A-Fella, D-Block, etc.) It’s an okay song if you wanna hear about drinking alcohol. Actually it’s not a terrible song, just not my thing. The last song on the album is “Shoes”. Yea, a song about women shoes. I guess I would like it if I had a foot fetish. I got to pass on this song; it seems like Noreaga mistakenly did a remake of Kelly’s “Shoes”.

Bottom Line:
I’ll go one a say it, I think this is by far N.O.R.E.’s worst album. I know he’s independent now, but damn. It’s not the worst album I heard this year, but after his last album as well as other problems at Def Jam, Noreaga should have made a statement with Noreality. This makes me think that if you take away the big name producers the made him hits in the past, Noreaga can’t produce. Maybe he needs the cash or something, but I hope N.O.R.E. goes back into the lab and comes with something better on the next go round.