Hell Rell – For The Hell Of It [Review] 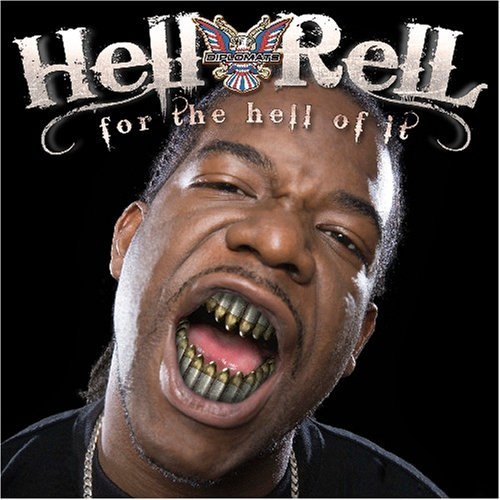 Damn, this is the second straight week that I had to review a Dipset album. Why am I complaining? Because The Diplomats related albums we reviewed this year so far, in my opinion, weren’t that good (Well, King Jerm liked More Than Music Vol. 2 but sometimes he be tripping).But there is a silver lining to this story; it’s Hell Rell’s album. Like I said in the 40 Cal. review last week, Hell Rell is probably my favorite Dipset member. Why you ask? Well for one, unlike 40 and JR Writer, he isn’t a Cam’ron clone. Ruger Rell has a distinct voice and flow that I feel sets him apart from the rest of his brethren. I’ll be real though, him being my fav Dipset member isn’t saying much since I think 85% of the members are clowns. But I’ll push all that shit aside and see what Rell has on his debut For The Hell Of It. Oh yea, did I forget to mention that scary ass album cover? That shit will give me nightmares for sure.

Oh shit! “The Intro” of the album is actually hot. It sounds like Just Blaze which of course I know it’s not, but it’s better than most of the production that they give to the Dipset B-Team. Rell goes hard with lines like, “I come through in the drop Porsche, two tone colors, you and ya man y’all could be tombstone brothers.” Yea, it’s that same gangsta shit, but it’s well done same gangsta shit. “Do It For The Hustlers” is next and Hell Rell reiterates his love for the streets. Over a bouncy track Rell talks about his hood. The chorus on the song isn’t terrible, just not original. “Paperboy” is a solid song that generic thug subject matter takes away from it. The beats not bad though and the hook is kinda funny; “The only way you’ll be around this motherfucking paper boy, is you quit you job and go be a paperboy…” “Deep In Love” is a stand out track on the album and utilizes a good sample. Rell rides the well produced beat and goes into his loves. One of the good lines from the song is about his love for his daughter; “I’ll kill you if you between her Similac money, I never going broke I’m a Diplomat dummy.” The thing about this album that surprises me is that the production is more Jim Jones than Freekey Zekey, if you know what I mean. This continues with “You Can Count On Me”. Rell goes more into his childhood in the hood. It’s the regular story; I sold drugs, seen murder, terrible conditions. But Rell makes it his own. Okay, “Streets Gon’ Love Me” is starting to make me realize that even though the production is better than I suspected, the subject matter is starting to get really thin. The beat is good and has a New York feel; something a lot of New York rappers are missing these days. But he’s starting to sound the same as the songs before at this point. You can exchange the song title of the last song with “Life In The Ghetto”, and I don’t think it would make a difference. The only difference? The hook on this song is garbage! Styles P shows up on “The Hardest Out” which is good because most of these B-Team Dipset members are relegated to only having Diplomats members on their albums. The paring of Styles and Rell makes since I guess; both call themselves the hardest out. The song really doesn’t produce anything memorable; I guess it could be a up North mixtape banger or something. Ruger Rell hits the strip club on the Young Dro featured “You Know What It Is”. Young Dro gives a noteworthy performance but the chemistry between Dro and Rell is nonexistent so the song is awkward. The album’s first single, “Show Off” is next and it’s…uh okay. It’s you basic flossing song complete with the flossy hook; “It’s time to show it off, watch me show it off, her ass got bigger she can’t wait to show it off’ I don’t like it but you may find the accompanying video… Nah, you won’t like that either. Cam’ron makes the mandatory appearance on “I’m Da Shit” and it has that signature chopped up/Opera Cam style too. It sounds like you average Dipset song you might have heard a hundred times already and it further shows me that Cam may not be able to pull himself out of this slump he’s in. The JR Writer featured “Respect Me” is next and at this point in the album, I think I’ve heard about a hundred references to how hard Rell is. There’s nothing really that stands out on this song unless you like to hear JR do his Cassidy impression. “I Shall Proceed” has Rell trying to make a club song. Actually it’s not a bad song; the beat sounds like a poor man’s Neptunes. Good try though but not for me. “Always Wanted To Be A Gangsta” is yet another song about how hard Ruger Rell is and I just wish dude could change it up a little bit. Once again, it’s not a trash song, its just that after a while all this shit sounds like bad Trina song (Blah, blah, blah, blah… you know). Juelz Santana shows up on “Where You From“. Is it me or are Juelz and Jim Jones slowly separating themselves from Dipset? Maybe its me but on the last few releases it seems like they barely show up (Juelz does half a hook for this song). Otherwise the song is nothing special. The last track of the album is the Dame Grease produced mixtape banger “I Ain’t Playin Wit Em”. I heard this song a while back and it had me looking forward to this album. It showcases Rell’s flows well; too bad it didn’t reflect most of the album.

Bottom Line:
Was I disappointed in this album? Not really, I wasn’t really expecting much. The production on For The Hell Of It was still better than I thought it was gonna be. The thing that really wears this album down is Hell Rell’s subject matter. Yea, I know some of you out there love the “gangsta shoot ’em up” stuff, but in today’s market you gotta show more than that. And if you do go that way you should do it the best. After the midway point in this album you start to realize that maybe Rell is a one trick pony who can only rap mainly about one subject. I still think Rell is talented, I just think he might have needed help making a better album.