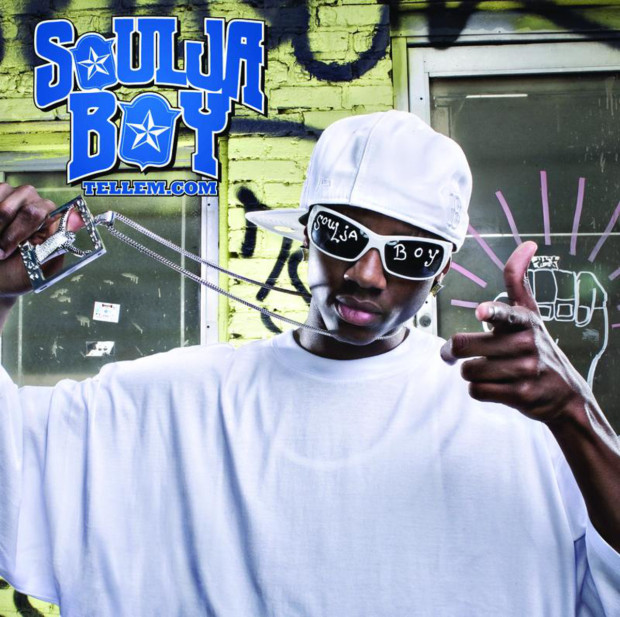 I know what y’all thinking, “B-Easy is gonna trash the hell out of Soulja Boy”. Nah, I actually respect the young dude. While I’m not the biggest fan of the actual music, I can admire the way he came up. Before he reached age 18, he was already a producer, live entertainer, internet sensation, and possessed the ability to write catchy hooks (It’s this same hustle that got him a record deal with Collipark Music). And lets be honest, you might not like that dance, but isn’t it a throwback to when Kid N Play or Ed Lover and a lot of others made up dances? Hey, at least the young kids aren’t dropping down and getting their eagle on anymore. But we ain’t here to talk about achievements or dances are we? We here to talk about the music. So with that, let’s get into Soulja Boy’s debut Souljaboytellem.com.

The “Intro” is basically Soulja Boy (or Soulja Boy Tellem?) thanking the fans and saying he’s gonna takeover the world. It’s quick and it feels like an after thought than something that brings you into Soulja Boy’s world. Then they go right into “Crank That (Soulja Boy)”. What can I say about this song that hasn’t been said before: It reached #1 on the Billboard Hot 100, had a million homemade remixes as well as millions of hits on YouTube, and you probably saw you little cousins doing it last month at the family reunion. What do I think about it? It’s fun and terrible at the same time. Yea, I rather my niece and nephew listen to this, but after the 100th time you here it on the radio, you want to kill yourself. This album is half of material Souja Boy released independently on the internet and half Mr. Collipark himself trying to polish it. There still are a few blatant attempts to cash in on the “Crank That” craze; most even using lines for the song as their hooks. “Bapes”, featuring Arab, borrows the line “I got me some Bathing Apes” and stretches it to a wholes song as does “Pass It To Arab” (which lets his sidekick Arab have a solo track). “Snap & Roll” is another attempt to make a “Crank That” clone; just replace the “Crank That” chorus with “Snap & Roll” and there you have it. When “Sidekick” comes on, you’ll hope that T-Mobile threw homie some cash for all the advertising; he even talks about having the D. Wade version 2-way and pulling girls with his Sidekick 3. The only song that I actually halfway like on the album is probably “Let Me Get ‘Em (Shootout)”. I once heard it in a club and I didn’t even know it was Soulja Boy. It’s not that bad, it’s the warning in the beginning telling you that it’s just a dance that kinda lame (I mean damn, the album already doesn’t have a parental advisory sticker on it). “Donk” is of course about a big booty girl shaking her …big booty. Nothing new here. Then I hear “Booty Meat”, which is basically the same song, and I realize Souja Boy should have stop while he was ahead. Doesn’t “Booty Meat” sound nasty as hell; “No chicken breast or wing for me sir, give me the booty meat”. Yahhh! featuring Arab is another stab at a catchy single (“Yahhh trick, yahhhh!”); but it sounds kinda dumb. The love song “Soulja Girl” probably has the most production on the album complete with I-15 singing an R&B hook (I said most production not well production). It’s an attempt to cash in on teen heartthrob money, but by the time the hook come around it’s almost an unintended joke. “Report Card” is kinda like was Kanye did with Rich Boy’s “Throw Some D’s”, but more junior high like (“I got all F’s on my report card, I told my teacher to throw some D’s on that bitch!”). “She Thirsty” at least sounds like some older Ying Yang/David Banner whisper songs…it still sucks. “Don’t Get Mad” is a letter to the parents with lines like, “Don’t get mad because your kids like me, it’s a movement”. Sorry Soulja Boy it’s not movement, it’s a fad.

Bottom Line:
Yea, this album was what I expected. If I didn’t have to review this album, I wouldn’t have ever gave it the time of the day. I know it’s supposed to be a fun album for the pre-teen/teen kids, but for me personally I need more substance. I just can’t co-sign this album or give it a pass because of Souja Boy’s youth. Pass on this if you over the age of 16 and give it to your little cousins. I just hope Soulja Boy is saving up his money, I don’t see a long future for him in music. He becomes last week news by next week.