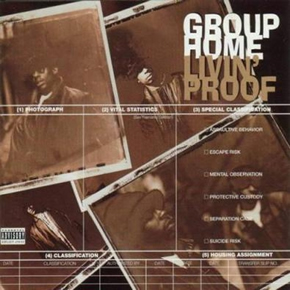 You take one of the all-time greatest music producers in Hip-Hop and add a gritty, street Hip-Hop duo from New York and what do you have? Possibly the greatest underrated Hip-Hop album in history. This undervalued album that I’m speaking of is entitled Livin’ Proof from the duo Group Home. The pair of emcees that make up Group Home are Lil’ Dap and Malachi The Nutcracker. After being featured individually on numerous Gang Starr albums on songs like “Words From The Nutcracker”, “I’m The Man”, and “Speak Ya Clout”, the two emcees are given the opportunity and join together to create one of the hardest Hip-Hop albums released to date. Being a part of the Gang Starr Foundation certainly comes with its perks as you have a superior music producer on hand in DJ Premier, a exceptional lyricist in Guru, and some fantastic side artists on the team like Jeru The Damaja and Big Shug. The year was ’95, and it couldn’t have been better timing by Group Home to use DJ Premier to supply a majority of beats for the songs on their album. The beats alone on this album with keep you zonin’, especially if you’re as big a fan of DJ Premier as I am in which he produces 11 of the 13 tracks (Guru and Big Jaz are listed as the other two producers) on Livin’ Proof. From the opening “Intro” track Premier goes straight to work with a simple, yet well-crafted 1-bar loop. This track is just supposed to prepare you for the musical landscape that Premier is going to craft throughout the rest of the album and it does a great job of doing that straight into the following track “Inna Citi Life”. Even though Lil’ Dap and Malachi The Nutcracker aren’t the best emcees lyrically, they keep the listener’s attention on the songs with their narrative tales and accounts within the inner city ghettos of New York. Songs like “Livin’ Proof” and “Up Against The Wall (Getaway Car Mix)” display this in a fantastic manner as both a fit with banging tracks for the duo to lace their rhymes on top of. These two tracks are probably the best tracks on the whole album as Lil’ Dap and Malachi’s lyrics seem to fit right into place of DJ Premier’s thumping kick drum and smacking snare drum. These two tracks musically describe the New York setting in which the two emcees are so vividly speaking about. If you are able to zone out past the lyrics and into the beat, you can sort of begin to imagine the gritty New York streets setting being described. Essentially that is exactly what a beat is supposed to do for the individual listening and DJ Premier is able to do that in top form. These two songs display why DJ Premier is considered the standard in real Hip-Hop in terms of music production and why this time period was considered his prime.

In my opinion this album isn’t a classic in terms of the lyricisms displayed from Lil’ Dap and Malachi The Nutcracker, but in regards to the music production from DJ Premier. The gritty, 8-bit, classic New York rap beats that Premier supplied are a prime example of why New York rap back in ’94-’96 was considered Hip-Hop at its finest and why that era produced so many classic albums. Listening to this album makes you yearn for the current times of rap music to take a 180-degree turn and move backwards back to this golden age. Albums like this make you forget about the commercial bullshit rap from artists like Flo Rida and Lil Wayne, and think about the classic times of the rap game. Never in today’s time could an album’s single be “Livin’ Proof” or “Supa Star” and get the respect that it received back then in 1995 for the superior lyrics and outstanding beats presented.

Hearing this album makes me say fuck these artists making petty beats on FL Studio and bring back out the old Akai MPC 60-II with that gritty 8-bit sound. I’d take that any day just because of how the music made you feel and the state of mind that it put you into. That’s probably the biggest aspect of this album and why it can be listed as an underrated classic in the state of mind that it’s able to put the listener into just from the initial listen of the album in its entirety. True story, I brought this album into the recording studio that I intern at and played the album over the monitors and they started going crazy. They didn’t even know who the artists were or had ever heard the album before, and they loved it. There were so many heads bobbing to the music I thought some people were going to seriously hurt their necks. I had so many people to burn a copy of my Livin’ Proof album that day it was ridiculous. That’s a testament as to how great this album is and how underrated it is since 1995. All it takes is one listen to get you hooked and you will never need another DJ Premier produced album. Spread the word about the album and give it the respect it deserved. Take note artists and just follow the simple formula for success: (Artist) + DJ Premier = Classic!!!