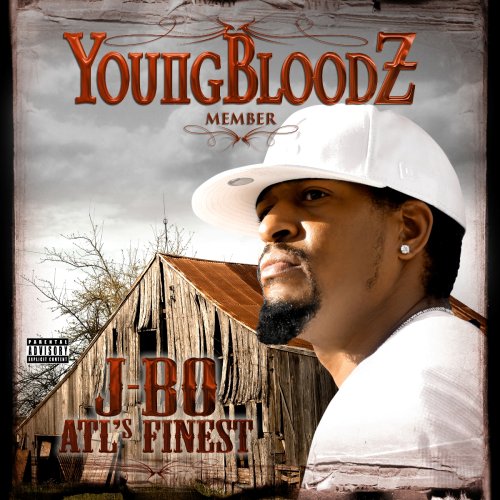 Even though an album by the group YoungBloodZ is scheduled for later this year, both members (Sean P & J-Bo) have ventured of as solo artists. While Sean P (formally known as Sean Paul), has had numerous guest appearances and air time with the likes of Cherish, Sammie, & Lil’ Jon; J-Bo has been rather quiet. Well, I guess he tries to changed this with the release of his first solo album ATL’s Finest.Is there any anticipation for this release? I really don’t think so. J-Bo is like the John Oates of the YoungBloodz (What? You never listened to Hall & Oates?). Okay, let’s go…

1. ATL’s Finest
Over an generic bouncy track, J-Bo explains to us all that he’s Atlanta’s finest and an A-Town legend. Why is this? Who knows, it’s just an intro.

2. Look At Me Now
The album’s first song has “Mr. Herringbone Jones” enlighten us on how it’s time for a new king and how he’s got a little change. The beat is not bad and I always thought J-Bo’s voice was his best attribute. It’s nothing breakthrough, but it’s not terrible either.

3. A-Town
This track sounds like a poor man Lil’ Jon. I know “The King of Crunk” is responsible for giving YoungBloodz basically all their hits, you gotta move on. The hook on this one is lazy too; “Work by the zone/Bottle of Petrone /Trying not to blow my high/baby girl all alone/Texting on the phone/Peeping out the corner of her eye.” Next!

4. I’m A Problem
It’s here that I remember why Sean Paul was the stand out in the group; J-Bo has almost no charisma. I mean, he’s not terrible when it come to lyrics; but a time he’s boring as hell; “I’m a YoungBlood/I never been a scrub/I never chase a hoe/And I don’t even show ‘em love.” I once again have problems with commonness of the beats.

5. Another Level
Oh shit! This interlude samples…Pimpin’ Snooky! Wanna know from where the samples come from? Click here.

6. Make Me Rich
I guess this is the pimpin’ song off the album. The beat does it’s best Eightball & MJG impression though, but it’s not too shabby. The hook though…well, I‘ll let you be the judge; “Bitch, bitch, make me rich/Bitch, bitch, bitch, make me rich.” Why is it when Pimpin’ Snooky says the word bitch, I let it go, but when J-Bo says it, I shake my head? I don’t know. One seems real, one seems contrived. Pick which one.

7. Pull It Off The Lot
Here, J-Bo is in full stunting mode. From making it rain, to “pulling it off the lot while most niggas window shop”, J-Bo covers all the bases. See, this is where I reiterate that J-Bo’s need to carve out his own personality. Just because every bodies doing it, doesn’t make doing the same a good thing. The chopped & screwed hook and snap like beat add to this.

8. Back To You
Time for the ladies to get a song. J-Bo does you standard love rap thing and I hate to say it, I just about able to stand this song with is boring laid back beat and all. Then the chorus hit; “G5/Flying through the sky/Girl I can’t lie/I’m on my way back to you/Touch down/In the Maybach/Tank full of gas/I’m on my way back to you.” Really J-Bo? Really?

9. My Life
J-Bo drops some of the fake posturing to tell some of his life story. So far this might be the best song off the album, I mean, I still really didn’t care for it but still. His cadence, at this point, has became monotonous; “See let me tell you about a nigga who don’t give a fuck/It all started way back as a young buck/19 was the year I cut my first deal/My first ride, big check/Something had to give.” Once again the hook is also weak.

10. After The Show
Here J-Bo talks about the cities he’s toured and the women that come along with it. This is the first song that I didn’t hate off the album. It’s by far the best produced track. Even though J-Bo’s lyrics are simple, he’s still able to bring you into the song a little bit.

11. What I Do
This interlude is a audio clip of Joe Pesci from Casino. Even though I love the movie Casino, the clip doesn’t make much sense being on this album.

12. I’m Still A Problem (feat. Lil’ Scrappy)
This is basically track 4 with a Scrappy verse inserted. I guess I can commend J-Bo on having the guts to only have 1 guest feature on his album. It probably would have helped though; Scrappy verse is better than J-Bo’s.

13. Herringbone Jones
An short outro to the album…finally

Bottom Line:
One word for this album: Generic. The problem here is this; How can you stand out in a over populated field, if you don’t bring anything different to the table? J-Bo does what is popular and doesn’t do it particularly good. Not only does this album lower J-Bo already low rankings, it doesn’t have me looking forward to the upcoming YoungBloodZ album.