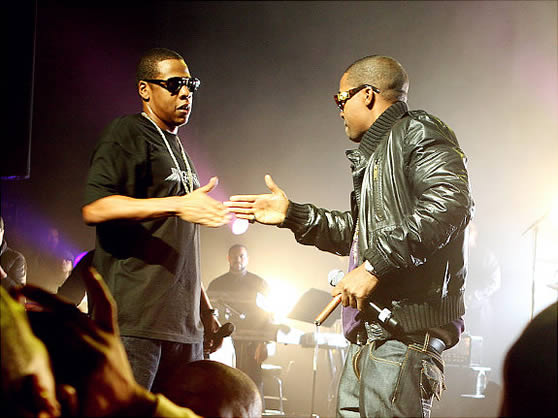 As the end of the year approaches, I have decided to take a look back at some of the best music in the past decade. The biggest event in Hip-Hop from 2000 to 2010 is the Jay-Z versus Nas era. I know we here at The Fro’ have talked about this to death, but I am going to offer my insight.

Jay-Z beat Nas in this battle.

I know it is weird to say it, but think about it realistically. Jay was on top of his game when he finally decided to go at Nasty Nasir. Nas had fallen off of the everyones list as one of the illest emcees (And for good reason).

After Nas put out Illmatic he only put out one good album, It Was Written. The other albums he put out were average, at best. Jay had put out Reasonable Doubt (Classic), In My Lifetime Vol. 1 (Underrated) Vol. 2… Hard Knock Life (98’s version of Tha Carter III), Vol. 3… Life And Time Of S. Carter (His only disappointing venture), and Roc La Familia (A group project but Jay shined). While Nas was shooting bricks, Jay was positioning himself for what he would become today.

Not only was Nas not putting out the best quality, he was releasing his music pretty slow. Between 94-00 Nas only released 4 albums. Jay on the other hand released 5 from 96-00. That is one more album with two years less time.

Okay now that we have touched on the history a little bit, lets talk about the battle. I know these two took multiple subliminal shots at each other, but I will ignore those. Really the only thing I will touch are the two biggest songs from that batte, “Ether” and “Takeover”.

Jay-Z released “Takeover on his 2001 album The Blueprint (Classic). Jay made a quick reference to Nas in the Second verse, but didn’t really get at him until the third verse. Jay not only claimed Nas had fallen off (Which at the time most people agreed with) but also questioned his street cred:

Nigga, you ain’t live it you witnessed from your folks’ pad
Scribbled in your notepad and created your life
I showed you your first tec, on tour with Large Professor
Then I heard your album ’bout your tec on your dresser.

Jay assaults Nas with 32 bars over a hard beat.

“Ether” was released by Nas on his 2001 album, Stillmatic (Classic). Nas took an old Tupac sample (“Fuck Jay-Z”) to start off the song. Nas made many witty gay jokes on the behalf of Jay, and claimed that Jay steals Biggies lines (Most would argue that he did to pay homage). He goes on to claim that,

I got this, locked since Nine-One (1991), I am the truest
Name a rapper that I ain’t influenced

He calls Jay out for the “Renegade” track, where Eminem killed Jay (No Nas and Em songs though, just wanted to mention it).

“Ether” is a very disrespectful track, but it is merely that. No real claim against Jay. He calls him wack, old, and gay. Jay actually attacks Nas and his art. The reason everyone loves “Ether”, is simply that Nas was the underdog. Jay killed Nas in the battle of these tow legendary disses with one verse, as opposed to a whole song.