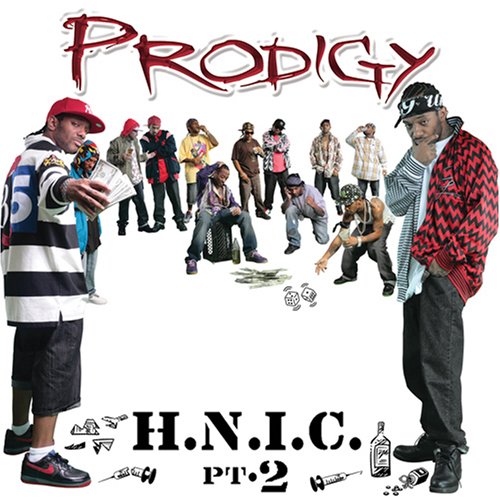 With Prodigy off the scene currently serving a three-year bid for gun charges, one half of Mobb Deep decided to leave us with an album to bump while he’s doing his time. Being eight years since he released H.N.I.C. back in 2000, does Prodigy still hold claim to the title of being the “Head Nigga In Charge” or is just another nigga serving in the game.

Real Power Is People
Produced by Sid Roams
Prodigy comes out the gate with a straight banger on the opening track. The beat is definitely knockin’ and Prodigy’s lyrics are on point. G.O.D. = Gold, Oil, Drugs (That’s some interesting shit). Prodigy is off to a good start on Part 2.

The Life
Produced by The Alchemist
Prodigy hooks up with a familiar contact in The Alchemist for a beat on this track. The track is grimy with that signature Alchemist sound that fits Mobb Deep so well, so Prodigy is right at home on this one. This track kind of lost some of the album’s energy from the first track though.

Young Veterans
Produced by The Alchemist
On another track provided by Alchemist (he produces five on this album), Prodigy comes correct over a nicely sampled beat. This track picks back up the album’s pace where the first track left off at. Nice track by Prodigy.

Illuminati
Produced by The Alchemist
We have yet another track by Alchemist as he delivers three in a row for Prodigy. While the first two tracks from Alchemist fit Prodigy and the mood of the album, this one is far left. Prodigy sounds decent over this track but it doesn’t really fit together. He should have given P something much darker for this track to fit the track title and the way Prodigy was trying to go. He should have sampled the chorus as well from his verse on “I Shot Ya”, it would have sounded much better. This track is a SKIP.

New Yitty
Produced by Sid Roams
Now this is what I’m talking about. Sid Roams put us back in that grimy mood for the album with this track he produced. Sid Roams is a familiar one on this album with Alchemist, as he produces 5 tracks as well. Prodigy fits comfortably spitting rhymes over this beat as it flows very well. P fell off for a minute but he’s back on track with this one.

ABC
Produced by Sid Roams
Prodigy keeps it going and continues where he left of with the previous track. Another track from Sid Roams that fits P nicely. The only thing that I don’t like about this track is the weak chorus (“A, B, C, D, E, F, G, H, I, J, K, L, M, N, O, P…”). Come on P, you must come more creative than some shit like that. Other than that this is a decent track from Prodigy.

Click Clack
Featuring Big Twinz; Produced by Sid Roams
DAMN! Now Sid Roams really came correct with the ill beat that he provided on this track. The smooth track is still gritty enough for Prodigy and the featured Big Twinz to do work. This track is definitely on repeat and goes hard. This track is perfect for late nights ridin’ in the whip. This album would have been near classic with more tracks and beats like this one.

Veteran’s Memorial Part II
Produced by The Alchemist
Alchemist brings it back to where it belongs in terms of the beat after his misstep on “Illuminati”. Prodigy’s lyrics go good with the beat as he does some reminiscing about his homies that have passed on but wishes they were back with him. This is a nice track that does its job and serves its purpose in paying respect to those gone on.

Field Marshall P
Featuring Un Pacino; Produced by Havoc
Finally we get a track produced by Prodigy’s partner in crime and other half, Havoc. Havoc hooks up a good beat that goes well with Prodigy and Un Pacino’s lyrics, but the beat gets monotonous after a while. This causes the song to become somewhat boring after a while. The skip button will probably be hit before you get to Un Pacino’s verse. This is a decent track.

3 Stacks
Featuring Big Twinz; Produced by Sid Roams
Prodigy brings back in the Big Twinz for another Sid Roams produced track. Roams produces a decent beat on this one and it works for the track. This track is average, but doesn’t compare to the “Click Clack” they all were on previously. LOL, it was funny to hear P put his twist on some Biz Markie lyrics in this song though. Y’all Biz fans will know what I’m talking about when you hear them.

When I See You
Produced by Apex
On this track Prodigy gets a beat provided by Apex of “I Get Money” fame. The beat from Apex is pretty average, nothing special like his previous famed work. Prodigy is able to flow comfortably on the track, but he’s not saying much of anything. This track is pretty boring and is a SKIP for me.

It’s Nothing
Featuring Big Noyd; Produced by The Alchemist
On the last beat provided on the album from Alchemist he finishes off strongly on this track. Prodigy takes time to give Big Noyd a spot on the album coming off a good song in “Things Done Changed”. Big Noyd does his thing in kicking off the song, as P comes after him finish the song in good fashion.

I Want Out
Featuring Havoc & Un Pacino; Produced by Havoc
Arriving at the last track of the album, Havoc produced a beat that really fits the only Mobb Deep connection on the entire album. All three emcees spit nice rhymes over the dark track provided by Hav. This is a good track to close out the album.

ABC (Vox Spanish Remix)
Produced by Sid Roams
This is the bonus track on the album in a remix vox Spanish version of “ABC”. The difference between this track and the original version on the album are the Spanish lyrics inserted with Prodigy’s verses. The track isn’t really much different from the original besides that fact as the beat and shitty chorus is still present.

Bottom Line:
This album from Prodigy is ultimately an average release from him in comparison to his past two previous solo releases in H.N.I.C. and Return Of The Mac. This album will definitely hold over hardcore Prodigy fans during his three-year bid until he’s able to record and release some new solo and Mobb Deep material. That’s really the biggest damage with him doing time in jail, knowing that there won’t be any new Mobb Deep material until his release unless they recorded some before he went in. While this album isn’t on the same level as H.N.I.C. with tracks like “Keep It Thoro”, “Can’t Complain”, or “Three”, it does offer some gems to be found within listening. Overall, even though Prodigy initially claimed the “Head Nigga In Charge” title, with him away from the game now there might be a new nigga runnin’ things.