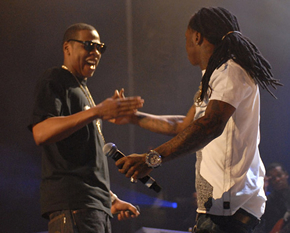 Okay, I promise we won’t be one of THOSE kind of Hip-Hop sites that post every new song that comes out or leaks. But come on, after talking about the supposed Tha Carter III leak pictures, we had to do this. It’s finally the real Jay-Z and Wayne song the world has been waiting on (“Hello Brooklyn” doesn’t count). The song is off Tha Carter III, it’s produced by Just Blaze Infamous, it sounds good, and personally I think Jay wins. You tell me what you think.