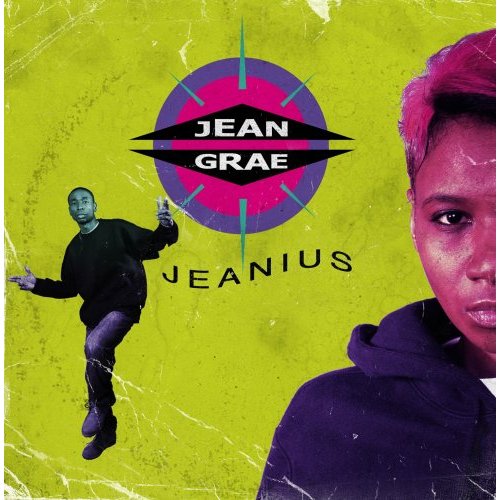 It’s been about 4 years since one of the illest females you’ve never heard had her album stolen and leaked to the net. Jeanius is finally getting the official treatment. This version is said to have been done all over from scratch…that is all the music done with live instrumentation/no samples and some fresh songs as well. How does it stand up? Let’s find out. (*name in italics is the name from the older leaked version*)

Intro (Intro)
The first thing I notice is the absence of about 33 seconds…but it’s a good thing. The original had some ominous voice and talking at the beginning. The song itself has definitely been back to the boards and redone. It’s obvious when compared that this one is a lot cleaner and level. Other than that, the song seems the same. If it ain’t broke don’t fix it.

2-32’s (B.N.K)
Featuring DP
Someone wanted to start a cypher, 32 bars each for both emcees. Nothin’ here but the beat and the mic. Lyrically, both Jean Grae and DP bring it on this one. I think the track gets a little repetitive by the end, but outside of that, the song rolls. It clocks in at about 20 seconds shorter but you don’t miss them as the song has no gaps.

Don’t Rush Me (Don’t Rush Me)
The intro adlib is funny as hell to me; “9th got the beats you can sing to for no reason”. Then she comes with the ruckus; There’s nothin’ like knowin’ ya’self/Like the way I know smokin’ had kinda broken my health/Like the way I know my flow don’t make appropriate wealth/I can’t change that/Funny I say that when it’s money I’m aimed at.  This is typical of the What What. She is unapologetically, one of the straightest shooters in the game. She is real at all times and realer at others. The most noticeable change in the track is the chord. It’s a lot deeper and placed a little later than the previous version.

My Story (Please Forgive Me)
I won’t cheapen this one by telling you what it’s about, but it’s personal as hell. I won’t claim to know her or anything like that, but if this is just her writing without experiencing what she is speaking on, she needs to write screenplays. The story is gritty and insightful and paints the picture perfectly, from all aspects. The track has been redone with some new instrumentation and slight tempo changes. The rework is obvious and positive on this one, I definitely like this version better.
The Time Is Now (The Place Is Here)
Featuring Phonte
The Ashford and Simpson of this rap shit are here playing on a classic 9th Wonder sounding track. “Get green like I’m chlorophyll”? She took it to biology, I can’t hate, I like that shit. Ha ha!. Tiggalow comes with the comedy in his flow as usual; Labels used to play me like, now they betta pay me like, I’m Luke Wilson, check ya books I ain’t Owen. Both go back and forth asserting that now is their time. Percy Miracles makes an appearance during the background. This version features a redone hook, a little beefier kick, and cleaner sound overall.

Billy Killer (He’s My Man)
The singing and guitar on this track meet you at the door and sound exquisite together. There are some gaps in this song, sounds like censorship, and I don’t know what she says in those spots. Maybe that’s part of the concept, but I missed this one. I mean, of course, it’s the darker lines that feature the gaps of silence and censorship, but I want to know what she says. It’s the same on both versions so we won’t know until I can get the interview done. This version, again, sounds cleaner and “finished” and features a lil’ more kick from the 808.

Think About It (Think About Me)
This is Jean lettin’ her nuts hang (pause). There’s nothing wrong with a lyrical threat and some grandstanding to anyone who will listen from time to time. The castration talk makes me cringe, but other than that, song is tight. The horns are well done and 9th offered up a pretty deep track, musical as hell.

8 (Non Sense)
You don’t like the way I flow/She needs more emotion tho/I’ll give you emotion, it’s you holdin’ ya broken nose/And leave you comatose/Qith a pound of Columbian snow/Atcha side and when the cops arrive they’ll just think you overdosed. The Heidi Fleiss of words? The Corretta Scott of her day? Jean is on her shit with this one. At a brisk 2:25 on the clock, this is somewhere between a interlude and a song, lyrically, it’s a beast. This version is virtually the same as the older one.

American Pimp (The Game)
Featuring Median
The track is dope, some old school funk/bluesy sounding hybrid. The song itself isn’t far behind. Median comes in and delivers a methodical deliberate flow that sometimes seems to snake around the tempo and fluctuate between here and there at times. It’s a pretty interesting dance. Jean showcases her storytelling again with the help of a dope ass change in music. The production value of this song over the previous version is bananas.

This World (Until)
Y’all wanna let me in/Then you wanna change me up/Man how the fuck you think you ever gonna play me up/You can’t play me out/Y’all just actin’ crazy now/I’ll be doing Jeanie until this world fades out. She lets us in on the roadblocks and hurdles she deals with being a woman in the biz, at the same time, she asserts and challenges anyone who thinks that she is not the genuine article. Well done Jean. The track is dope, no sight of any 9th Wonder slow down here. Not much variance from the older version.
Love Thirst (So High)
There aren’t many more Hip-Hop songs that can get more laid back and groovy than this one. The older version was about 4:26, this one is a full minute and some longer. Why? So you can listen to the grove and hear Jean …But anyway, the track is not complex but it’s so laid back and chill, you just want to hear it. Damn, this is a sexy ass song.

Desperada (2nd Chance)
Jean gets personal again talking about suicide and drugs as she gives praise for being able to live in the now. I’m so glad you saw the light too Jean. There isn’t much to say about this one, it’s pretty raw and straight forward. I think some part of all of us can relate to the song and her sentiments on this one.

Smashmouth (was included on the back half of “2nd Chance” – hidden track)
Featuring K-Hill, Edgar Allen Floe, & Joe Scudda
The way the track comes on reminds me of the another real dope posse cut, “The Headbanga”. It has that kind of go get it feel. Now the hook is horrible, but the lyrics are pretty fly from the first three. Joe Scudda stumbles a bit on the anchor leg though. Jean Grae with the Eric Cartmen shoutout damn near made me fall out my seat laughing as well as the Last Dragon reference.

Bottom Line:
I am glad it’s finally out. Even more glad that I can finally cop officially. For those of us that have this CD from the previous leak of the unreleased version, this trumps that. The production quality on every song is a lot cleaner and a lot better sound quality throughout. I was sad there wasn’t any new content though. This was a great time to add a few more tracks or do something different to make a bigger splash in the market. Don’t get me wrong, I think it’s a solid ass album and one that anyone that loves Hip-Hop should cop, but other than the production value issues (that some may be used to by now) it’s the same album they got for free some 4 years ago. I recently read an interview about her retiring from the game, don’t know how true it is, but I hope it isn’t. She has been in the game and has some acclaim, but none of the bright lights. Imagine working where you work and not getting a raise or any recognition from the company publicly, but at your desk, folks come by and say how good of a worker you are…and imagine it’s been this way for quite a few years now. You would feel the same way if the job was what you chose to make your career in. So I feel her, but I hope she isn’t gone. She keeps getting better with time, this is just another example of Jeanius.