Little Brother – And Justus For All [Review] 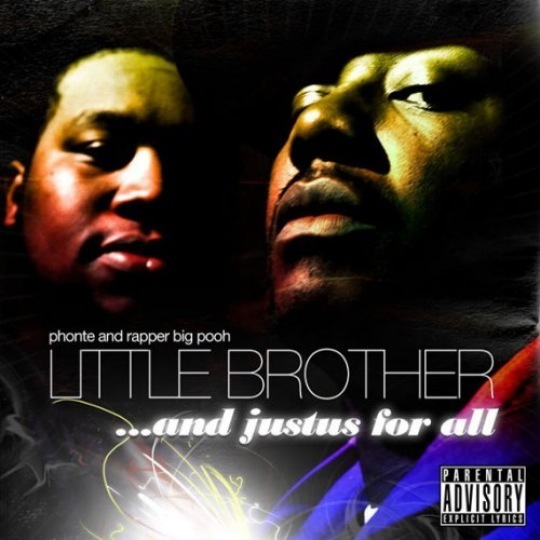 Before we began, let’s be clear about it; I already reviewed this album last year. Yep, Little Brother released this Mick Boogie powered mixtape last year and I gave it 3 Stars (Back before we stopped reviewing mixtapes). Matter of fact, go ahead and check out the original review first. Go ahead, I’ll wait…okay you back? Good. The only thing I’m covering today is the new tracks added for the official release of And Justus For All. After releasing 3 great albums, I don’t think this “official” mixtape will actually get them the notice they deserve. But, they still make good music though. Let’s check out the new material for the album.

Too Late For Us
Featuring Tiye Phoenix; Produced by DJ Spinna
After you hear the first new song of the album, you know right away that it’s not a throw away track. Phonte does some more moonlighting by singing on the hook and the song turns out to be a great duet about lost loves. Tiye Phoenix does a good job of singing/rapping while countering Phonte. The beat is laid back and fits the mood. Pooh doesn’t show up for this track but I’m sure he’ll show up later.

Cool As Fan
Produced by Khrysis
Speak of the devil. Big Pooh starts off this track and starts it off right. Phonte comes next and kills it; “Niggas talking major/But they got no flavor like white folk’s Kool-Aid”. No hook, just two verses. The song clocks in at about 2 ½ minutes, but it’s straight Hip-Hop.

Lose It
Featuring Jozeemo; Produced by Khrysis
It’s nappyafro’s favorite rapper! What up Jozeemo? Naw for real, I can’t really say anything bad about the dude. Besides the bias bullshit; he does good on the first verse; “Wanna dive off the stage/But I weigh 250/I ain’t fucking up my threads/Cause I’m way too jiggy”. The song deals with the feeling they get when they perform on stage. The beat is kinda redundant after a while; but it works.

Stylin’
Featuring Oh No; Produced by Khrysis
Khrysis surprised me and changed up with this electronic themed track and surprisingly the track works (I see dudes freestyling on this one all day). This track has Rapper Big Pooh and Oh No going on about what happens to the people around you when you start getting a little fame and wealth. I never really checked for Oh No liked that, but his verse wasn’t bad at all.

Time Of Your Life
Featuring Carlitta Durand; Produced by Designated Hitters
This is not really a new track per se. It was on last year’s GetBack (Which we gave a 4.5 Stars). It’s still a great song though (If you got that album, pull it back out and listen to it).

Black Light Special
Produced by 9th Wonder
It’s funny, the only new song on the album that was produced by 9th Wonder and I really didn’t like it. It’s not bad; it just could have been better. Pooh (Who goes on this one solo) tries to work with the beat but something just doesn’t feel right.

Bottom Line:
Even if you downloaded the free version of And Justus For All, you still might wanna pick up the official version; the songs are mastered, DJ free, and sound clearer. Plus the new songs adds something to the album. If you never heard this album, it’s not a bad addition to any Hip-Hop collection. Don’t get me wrong, some songs like Phonte’s “Last Day” are not here and are sorely missed. But the new songs compensate for that and are at least worth an extra ½ of a Star Rating. In recent interviews with Little Brother, it was hinted that this might be the last “official” album from Little Brother. If this is true, fans might wanna show some love to a truly slept on Hip-Hop group. (*Rating for this review is based on the previous review also)

Download: Little Brother feat. Tiye Phoenix – “Too Late For Us”