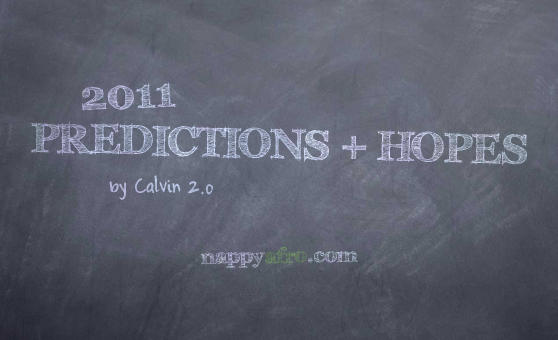 Okay, I know this is totally biting Maino’s concept track but is it such a bad idea to post up some of my own ideas? Plus I know it’s almost February but no one else is doing this so hate it or love it.

*Common releases an album more like Be and less like Universal Mind Control
*Detox actually comes out and lives up to the hype
*Slaughterhouse and Yelawolf bring Shady Records back to former glory
*Outkast start recording in the studio together again. Meaning that BOTH 3 Stacks and Big Boi are in the building together.
*Lupe’s tweets and protests against Atlantic Records pays off with a decent first week in album sales.
*Predict that J. Cole will actually drop his album but HOPE it sells.
*50 Cent never acts in a movie again. I know this won’t happen since he sold out and got his tats removed for Hollywood but we can only hope. While we’re at it, even though I liked the “Runaway” movie, Kanye shouldn’t act either.
*This is probably a big ask but lets hope that DMX gets out and stays out of jail this year. You know he’s been arrested every year since 1999. God Damn!
*While we’re at it let’s hope T.I. stops writing bullshit letters from prison and just gets his shit together when he gets out.
*Drake’s follow-up album is better then his debut.
*Nas proves he can still sell records. Not that units means much these day but would be nice to see Escobar get back on top.

Feel free to add to or just plain ol’ criticize this list.