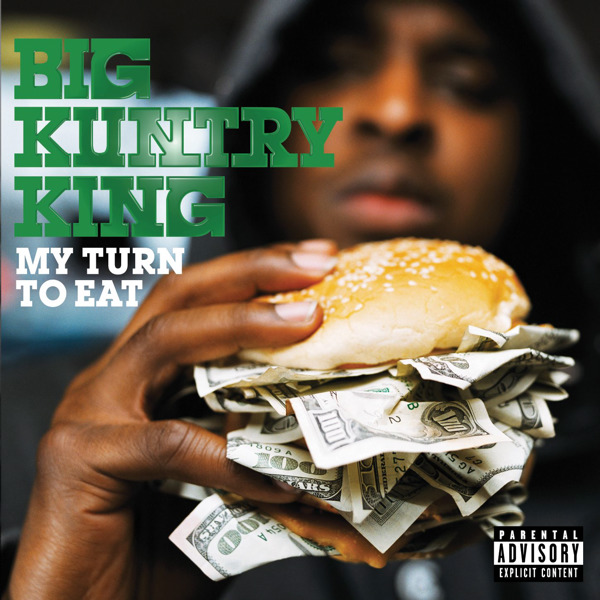 After spending years alongside T.I., Big Kuntry King never was one that clamored for the limelight. Now it is his turn to shine. Having to take the backseat to his boss and label mate Young Dro, Big Kuntry’s debut album My Turn to Eat is ready to hit the streets. Loyalty and patience doesn’t mean much in today’s Hip-Hop scene. While others would have left the camp to do their own thing, Big Kuntry stayed down and waited his turn. Despite dropping on the same day as the boss, Big Kuntry is ready to introduce the world to the man that everybody has seen before, but doesn’t know who he is.

Intro
Featuring Lil’ Duval; Produced by Nard & B
The intro that’s basically is the story of his life, no one knows who he is, but you always see him with Tip. He spits a couple of bars, but nothing that is noteworthy. This is an intro people!

Tool In Da Pocket
Produced by Keith Mack
This is one of the songs for the trappers, hence the title. The beat sounds like one that is on Jeezy’s album, but Kuntry does his thing over it. He has some simple lyrics, not elementary, but lyrics that are easy to digest.

Da Baddest
Featuring Trey Songz; Produced by Shawty Redd
This song was released a year ago but somehow it made its way on the album. The song is on the wack side. Trey has turned into the trappers hook man. I can’t get into this one at all. SKIP!

We Iz
Produced by J.U.S.T.I.C.E. League
Kuntry went out and got some of the best producers in the game for this song, but his lyrics are on the boring side. It is as if he is saying the same thing repeatedly. He wasted a nice track with some redundant lyrics.

Pots and Pans
Produced by Shawty Redd
I guess this was supposed to answer the question whether or not Hip-Hop was dead. However, Kuntry King is not the one to save it, nor should he try. The song is terrible. SKIP!

Soul of a Man
Featuring Rico Barrino; Produced by Keith Mack, Nard & B
This is one of those songs that Kuntry steps out of his comfort zone and makes a song that isn’t a club song or a trap song. He is not that good of an artist where he can do that. He needs to stick what works for him, and this isn’t what works for him.

Love You the Right Way
Featuring Lloyd; Produced by Kane Beatz
Big Kuntry with a love song? The women might like this one, but I’m not feeling this one at all. A question to Big Kuntry; why all of the R&B features on an album for a trapper?

We Here
Produced by Shawty Redd
I have concluded that Big Kuntry does not have much subject matter. He is saying the same thing over and over to different beats. He could have come a little bit harder on this song, but he didn’t. This song isn’t that bad, but it isn’t that good either. NEXT!

Focus
Featuring Young Dro; Produced by Tony Galvin
Finally, something that you can ride out to! Dro drops through to assist Kuntry King on this song. Dro put up his usual sixteen, but it was a hell of a lot better than what Big Kuntry was accomplishing on this offering.

Posse
Featuring Mac Boney & Yung LA; Produced by Marvelous J
Okay, I’m going to say this in the nicest way…the hook sucks, the features suck, and the whole song is a BIG MESS. Why did this song make the album? Tip did you sign off on this? Why?

Yeah (I’m On it)
Produced by Marvelous J
This is my favorite song off the whole album! When this comes on in the club, the place goes BANANAS! This song came out in 2006, but it’s still a BANGER to this day. Marvelous J laid down a banger, and Kuntry just rode the beat. Funny how he said, “like my boy LO, I’m the Man, got no wife but the white be my girlfriend!” Yeah, those were the good ol’ days.

That’s Right
Featuring T.I.; Produced by Nard & B
Yet another dated song that made the album, I wonder how that happened? However, this one features the King; well not really, he just does the hook for him. How did Kuntry let Tip by without lending a verse? It is another one of the club bangers, but it could have been better had Tip dropped a sixteen.

Bottom Line
For this to be his debut album, Big Kuntry left A LOT of room for improvement. Kuntry’s lyrics are a little on the redundant side, and he sounds bored at times in the booth. Those things will improve with time. He made some bad decisions with his album: the abundance of R&B acts on the album, having old material on the album, and no T.I. on the album! The planning of the album also comes in question. Why did Big Kuntry and T.I. drop on the same day is beyond me. I hope that on the next go round Big Kuntry will have things in order and create some better product.