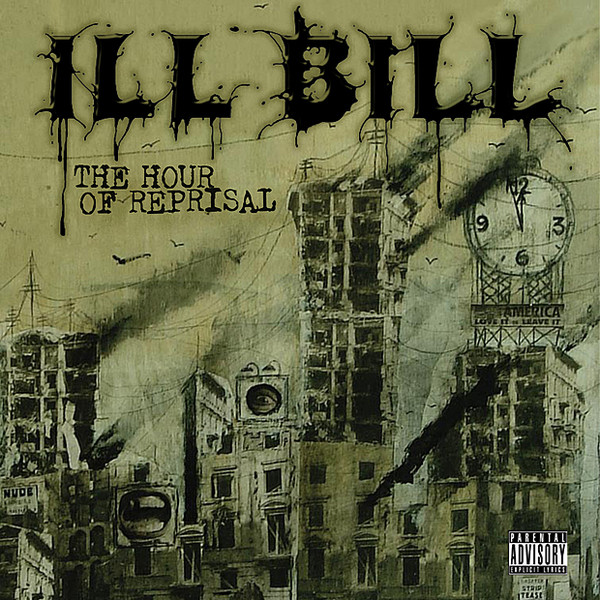 I was reading comments people posted, and it seemed like a large number of people actually were interested in an review of this album. I am a huge fan of Ill Bill and Non Phixion Records in general, so I thought why not?I can’t front and pretend I know all about Ill Bill so this summary will be fairly short. Started off rhyming with his brother, Necro, someone you should definitely check out if you haven’t already. He released a few tracks where he featured with his brother under their record label Psycho + Logical Records (I think it was bought out by Tech N9ne, but I’m not sure). After that it was a CD full of rarities, demo’s and all-over rare tracks (this CD was released in 03, yet all the material is from 91-94). Very interesting cover for that CD, anyway after that he released a second CD of rarities and mixtape tracks titled Howie Made Me Do It, this one with a more familiar cover, Ill Bill flipping the bird. Finally, in 2004, William Braunstein released his very first album, (which is still causing waves in the underground community) named What’s Wrong With Bill. I honestly believe his debut album to be on par with AZ and Dr. Dre’s, it is an amazing piece of work. If you ever look through the production values you probably won’t run into even one familiar name… but needless to say the production is fucking amazing for that album. Seriously, check it out! After his debut, he released a semi-mandatory instrumental album (because the production is amazing). Then for the past few years he has been dropping mixtapes here and there, getting some hype for his new album The Hour Of Reprisal…

1. Babylon
Featuring Howard Jones; Produced by T-Ray
At first it’s your usual self-righteous album intro, then the choir begins to sing and the drums/heavy metal instrumentals sets in. As a warning, a large part of this album contains heavy metal either in the chorus, hook or in the instrumental or maybe in all three. He actually features a metalcore singer on this track too. The instrumental on this song is really abrasive and annoying, I did not feel it added anything to this track. The lyricism itself heavily outshines anything T-Ray (nice name by the way jackass) could have ever hoped to accomplish. The chorus is sampled from a song which is in a completely different tempo so it doesn’t really mesh all that well. But despite all of those negatives, when Ill Bill flows he turns everything upside down with his insane lyricism. And the track appropriately ends with the theme of “Anatomy of A School Shooting” carrying over.

2. Doomsday Was Written In An Alien Bible
Produced by Ill Bill
The first time I heard this song I was quick to label it as weak because of the simplistic beat and awkward flow. But after a second listen, I found the genius of the second verse which is among the best I’ve ever heard. All the other aspects of the song are pretty average. The hook is in typical Ill Bill style, long and wordy, which makes it difficult to identify.

3. Trust Nobody
Produced by Ill Bill
Way too heavy of an metal influence for my liking. The flow was off, the beat is very quick and choppy which makes the lyrics very difficult to decipher. And when you do get to the lyrics you’ll discover that they are pretty weak compared to the above material. This was a delete/skip for me.

4. A Bullet Never Lies
Featuring Vinnie Paz; Produced by DJ Lethal
Ill Bill and the Jedi Mind Tricks collective have done some incredible work together, specifically Vinnie Paz (the anchor of Jedi Mind Tricks) and Ill Bill have done some great work. The production on this trick is pretty good, although the hook seems really forced and repetitive. Ill Bill once again turns in an average verse, and I believe he gets outshined by Vinnie Paz on this track.

5. White Nigger
Produced by Ill Bill
I heard this track for the first time back in late ’06, I’m sure it had been floating around the internet for even longer than that. But I instantly fell in love with this track for the raw emotion and pure logic throughout. I could do without the first 30 seconds but the rest of the song is VERY good. Ill Bill narrates this story about how he grew up in Brooklyn as a white Jew who was attracted to Hip-Hop. Even though the title doesn’t suggest it, this is actually a track denouncing racism, and I believe it is very effective. Probably the best song so far. It’s comparable to “Peace Sells” from his first album.

6. My Uncle
Produced by Ill Bill & Sicknature
Another raw emotional song, this one is about how William grew up around drug abusers. I do like this song, but if it were executed differently (maybe minus Ill Bill yelling) it would be on a different plane of greatness. Still a song you should definitely check out though.

7. Riva
Featuring HR & Darryl Jennifer; Produced by Ill Bill
If you can possibly ignore the first 45 seconds of singing, moaning, and singing through nasal cords… you will reach a tribute song for Ill Bill’s daughter (I think). But it is more of an insult than a tribute; I’m still grimacing after listening to this song.

8. War Is My Destiny
Featuring Max Cavalera & Immortal Technique; Produced by Ill Bill
Minus the demonic singing on the hook this would have been a decent song… Ill Bill sounds very comfortable and at home over this instrumental, although I can’t say the same about Immortal Technique who sounds out of place over this beat. I found this to be one of Immortal Technique’s weaker verses and probably his worst collab with Ill Bill. Maybe a delete, definitely a skip.

9. Society Is Brainwashed
Produced by DJ Premier
No that’s not a misprint, Primo produced this track and Ill Bill definitely knows it. He comes out blazing and flows lyrical FUCKING murder all over this dark instrumental. The only downside of this track was the out-of-place vocal sample on the hook… otherwise an impeccable song.

10. This Is Who I Am
Produced by DJ Muggs
Two big names in a row… two amazing lyrical performances in a row. On this track Ill Bill explains his career in the rap game and all the shit he’s had to go through to just achieve a little bit of underground hype. He rides the beat for a solid two minutes and then Muggs lets it ride out at the end. A really good hook for a change too.

11. Too Young
Featuring Hero & Slaine; Produced by Darp Malone
A very innovative beat, with elements of violin (I think) and soft piano. The first verse starts off slow, Ill Bill’s verse is fire, then the last verse is pretty hot too. I wasn’t really feeling the hook on this track either.

12. Pain Gang
Featuring B-Real & Everlast; Produced by Cynic
This is probably as close to Hip-Hop heavyweights that Ill Bill can put together, both B-Real of Cypress Hill and Everlast of House of Pain have been out of the spotlights for a good 10 years. B-Real had the huge hit “Insane In The Brain”, and Everlast had “Jump Around”, it’s kind of a shame that most people will only recognize them because of these songs (it’s a shame that some people still won’t recognize them). Once again the hook is terrible on this track, and it really upset the great lyricism by both Ill Bill and Everlast… Everlast was on some Immortal Technique shit here. B-Real has always been a pretty weak lyricist and he definitely gets shown up here, and I would have to say it’s pretty even between Everlast and Ill Bill; both turn in great verses.

13. U.B.S. (Unauthorized Biography Of Slayer)
Produced by Necro
When I saw this song on the track listing I instantly thought it was a lame idea… I didn’t really like Nas’ biography of Rakim (“U.B.R.”) … but Slayer? Well, I was wrong, this beat is simply put amazing, and it helps me drone out Ill Bill’s boring lyrics. I wonder who he thought would enjoy this song?

14. Coka Moschiach
Featuring Raekwon The Chef; Produced by Ill Bill
Raekwon murders Ill Bill on this track. This is probably William’s weakest verse off the whole album and it does not come at a good time. Rae has been putting in work lately, I’m beginning to think Cuban Linx 2 (when it comes out) may not be the disappointment it will inevitably be.

15. The Most Dangerous Weapon Alive
Produced by Necro
Once again, this song starts off slow with a lackluster first verse, it is helped out with an above-average (yet not spectacular) hook… and then the last verse is ill as fuck. I’m beginning to wonder why Ill Bill didn’t have Necro produced the whole album for him.

16. Soap
Interlude… can’t say it’s worth your time, but it does set up the next track pretty well.

17. I’m A Goon
Produced by Ill Bill & Sicknature
This is more of what I was hoping for from this album, less metal and more turntabling… Sicknature’s influence on this track in turn makes it more DJ Premier rather than Killswitch Engage. I really enjoyed this track, I can’t pinpoint what it was specifically, but it was really well produced and the lyrics were on point.

18. Only Time Will Tell
Featuring Tech N9ne, Necro, & Everlast; Produced by DJ Muggs
Necro starts this track off in an incredible manner spitting an fiery verse, then Tech N9ne ruins the second verse (but I’m biased), and Ill Bill sounds incredibly awkward on the last verse. Not a good way to end this album.

Bottom Line
Huh… this album was a very mixed experience. I did not enjoy most of the heavy metal sampling/chorus work on this album. I did however enjoy the “Unauthorized Biography of Slayer”. Even though this album is only 60 minutes, you will have to listen to it again to uncover much of the symbolism behind Ill Bill’s rhymes… or to analyze most of his political and revolutionary tirades. The wide range of guest features on this album adds to it’s greatness but also subtracts from it’s playability. When Ill Bill does songs with like-minded artists it sounds real good, but when he features unorthodox metal singers on his choruses it just sounds out of place. The production is also pretty shaky, there are a good portion of the songs which are well-produced. But for some reason, the songs I disliked, for the most part were all produced by Bill. At the same time, the Primo and Muggs tracks were great, Necro did a great job and Sicknature helped out too. Not a bad album, but it’s filled with holes and mistakes. But that’s just my opinion.