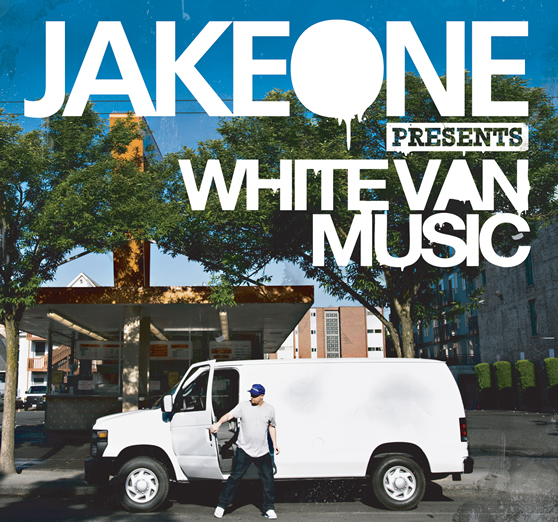 After taking some time to clean up my apartment, which entailed listening and going through over 100 unlabeled CD’s (I’m never making a “mixtape/playlist” CD-R ever again, it’s strictly iTunes/iPod only from now on), I decided to sit back and listen to Jake One’s latest release entitled White Van Music. Being a bigger fan of underground Hip Hop than I am of the mainstream/commercial side, I was anticipating the release of this CD after hearing about it. Not many people have heard about Jake One or know that they are probably a fan of a song that he has produced. If “I Don’t Know Officer” (G-Unit), “It’s Over” (Freeway) or even “The Time Is Now” (John Cena) is on your list of favorite songs than consider yourself in this category. Usually with compilation albums from producers, it’s more about the artists they select to feature over their tracks than their actual production. Let’s see how Jake One fairs on his debut album…

1. I’m Coming
Featuring Black Milk & Nottz; Produced by Jake One
After a brief introduction skit explaining how “music” is his drug, a sick bassline along with a background sample begin playing accompanied by drums and electric guitars. Jake One’s production on this first track immediately let you know what he’s coming with behind the boards. Black Milk and Nottz, who are also usually found behind the boards handling production for other artists’ work, deliver some bars instead on this track. Their lyrics are nicely delivered but average skill wise, a testament that they should just focus on the beats and production side where they are both amazingly skilled.

2. Gangsta Boy
Featuring M.O.P.; Produced by Jake One
This next track features some nice production by Jake One in terms of hard-hitting drums, heavy guitar, and synths. This track also features Billy Danze and Lil’ Fame of M.O.P. as they spit their signature aggressive and angry lyrics over a beat that equally matches their intensity.

3. The Truth
Featuring Freeway & Brother Ali; Produced by Jake One
On this track we get the unlikely pairing of Philadelphia emcee Freeway and Minneapolis emcee Brother Ali. Jake One provides the duo with a smooth sampled beat to spit their lyrics over and they do so in nice fashion. Brother Ali proceeds to take the track with his lyrics over Freeway’s verse, but Free did his thing as well. Brother Ali continues to show why he’s one of the underrated emcees in the underground with his slick flow and delivery.

4. Turn It Down
Produced by Jake One
This track is more of an interlude as it just a Jake One beat playing for 0:50 with some talking in the background. This is a nicely produced beat by Jake One and deserved some lyrics on it, but it just comes off too short and leaves you wanting to hear more. Contrary to the song’s title, this was a song that I was turning up and repeating a couple times.

5. God Like
Featuring D. Black; Produced by Jake One
The production on this track by Jake One is some of the smoothest that I have heard on any album released this year. The lyrics on this song are handled by relatively unknown emcee D. Black, who spits some good lyrics and shows much potential as an artist.

6. Bless The Child
Featuring Little Brother; Produced by Jake One
This track, which is one of the “Songs of the Week” here a nappyafro, features Little Brother getting down on a Jake One produced track. The soulful vibe produced on this track perfectly fits Little Brother in their style and manner. You could be confused for a second in thinking that 9th Wonder produced this track from how soulful it is produced. The singing and scratching at the end of the track is really the icing on the cake for this song.

7. Oh Really
Featuring Posdnuos & Slug; Produced by Jake One
On this track we get some bouncy production by Jake One with lyrics from Posdnuos and Slug. The production on this track is good but it seems a bit lacking from what we’ve heard previously on this album. Both emcees deliver some good lyrics with Slug upstaging Posdnuos on this song in terms of lyrics.

8. Hi
Produced by Jake One
This is another interlude track produced by Jake One that features some nice production along with some talking in the background. I’m not feeling the beat as much on this track as I was on “Turn It Down”, so this track was the perfect length and gets us right back into the album.

9. Trap Door
Featuring MF Doom; Produced by Jake One
In continuing with the album we get back in the mix of things in a great way with this hard-hitting track produced by Jake One. The emcee of choice on this song just happened to be underground legend MF Doom who delivers some humorous and skillful lyrics as he always does (Is it me or does MF Doom sound like Just Blaze when he’s talking?). I’m really feeling this track and wish it was longer than it is.

10. Dead Wrong
Featuring Young Buck; Produced by Jake One
This next track features ex-G-Unit member Young Buck over some production by Jake One that sounds like a mixture of the South and the West Coast. This can be considered Young Buck’s diss record towards his former G-Unit partners 50 Cent, Tony Yayo, and Lloyd Banks. Both the lyrics and the beat on this track come off just average and could have been done better. I know that Buck could have came harder at G-Unit on this track but maybe he’s saving that for another track (maybe a collaboration with The Game).

12. How We Ride
Featuring Freeway; Produced by Jake One
On this track we are blessed with another appearance by Freeway but this time it’s solo for the lyrics. Jake One provides Freeway with a piano based beat to deliver some lyrics about moving work and circulating that white. The lyrics from Free are better on this track than they were on the previously featured track with Brother Ali. Jake One and Freeway might be a collaboration that we start seeing more often and that wouldn’t be a bad thing.

13. White Van
Featuring Alchemist, Evidence, & Prodigy; Produced by Jake One
It was Evidence’s album The Weatherman LP where I was first introduced to Jake One and his production on the track “Down In New York City”. Evidence returns the favor on the title track along with Alchemist and Prodigy who join him for guest appearances. The beat produced by Jake One is a good one but it starts to become boring after a while. All three producers/emcees spit some nice lyrics but Prodigy takes the show as you might imagine with his verse.

14. Big Homie Style
Featuring J. Pinder, GMK, & Spaceman; Produced by Jake One
Jake One delivers some great production on this track as he produces a dark, epic sounding beat for three unknown emcees to spit lyrics over. The beat really sets the tone and mood for this track with J. Pinder having the best verse out of the three emcees. Jake One is doing a good deed by featuring these unknown emcees and bringing some new faces to the industry.

15. Scared
Featuring Blueprint; Produced by Jake One
This track features some more great production from Jake One, even better than the previous track. The piano based beat suits the lyrics from Blueprint well along with the song’s topic. Blueprint’s vivid lyrics succeed in storytelling and painting a picture in the listener’s mind that truly make this a great song overall.

17. Get ‘Er Done
Featuring MF Doom; Produced by Jake One
This track features another appearance by MF Doom who spits some lyrics over another dark beat produced by Jake One. MF Doom creates a song from the famous line from Larry The Cable Guy that works well with the production. While this is a good song, I’m not feeling it as much as I was the previous MF Doom featured track “Trap Door”.

18. Feeling My Shit
Featuring Casual; Produced by Jake One
On this track we get an appearance by old school emcee Casual over an average produced by Jake One. This track is basically Casual spitting some braggadocio lyrics over the beat while naming artists that are “feeling his shit” on the chorus. This is an average track in my opinion and gets boring rather quickly in listening.

19. Soil Raps
Featuring Keak Da Sneak; Produced by Jake One
Jake One manages to deliver another smooth beat with the production on this track that features Bay emcee Keak Da Sneak. He delivers some suitable lyrics over the nicely produced beat, but I really just can’t bare his voice as it’s hard to understand at times and the tone is just ridiculous. I’m middle ground when it comes to this track as I like the beat but really don’t care for the lyrics.

20. Glow
Featuring Elzhi & Royce Da 5’9″; Produced by Jake One
Continuing their work together from Elzhi’s album The Preface on the track “Motown 25”, Elzhi and Royce Da 5’9″ show how they haven’t lost a step since then. Jake One definitely does his thing with the production on this track, as it sounds perfect for the duo. This is a beat that I could really hear Little Brother spittin’ over as well and sounding as good as Elzhi and Royce Da 5’9″ do on it. This is a great track that should be repeated a few times after the first listen.

21. R.I.P.
Produced by Jake One
This track is basically a dedication track to the influential artists, emcees, producers, and DJ’s that we’ve lost in the music industry. Jake One samples Willie Hutch’s “I Choose You” for the beat on this track and it fits nicely for the song. I really hope thought that this is the last time for a while that a producer samples the song as it’s starting to get overdone.

22. Home
Featuring Vitamin D, C Note, Maine, & Ish; Produced by Jake One
This is in fact the first track that I heard off the album that really caught my attention and got me very interested in the rest of the project. The production by Jake One on this track is just incredible as he creates such a soulful backdrop for the emcees to spit lyrics on. Jake One recruits some fellow emcees from his hometown of Seattle that talk about their home. This is probably one of my favorite tracks on the album for the infectious beat alone.

Bottom Line:
As the debut album for Jake One he produces a solid offering in terms of this compilation. There aren’t really too many bad tracks on this album aside from a couple tracks and that really shows the strength of this project with a total of 23 tracks. Some people said that this album was too long and could have been condensed, but I think it’s a good length to really showcase Jake One’s skill and ability as a producer as well as his diversity for producing various types of tracks. Underground fans will really appreciate this album and new listeners will come to realize how good of a producer was sitting right under their noses without really knowing. I think people will start to look out for Jake One as a producer and he’ll start appearing on a lot more artists’ projects delivering great beats and production.