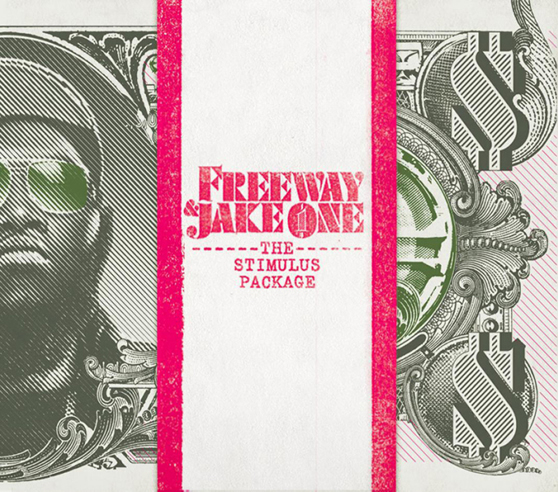 The Philadelphia born rapper returns with (what I’d like to say) his first official release since his departure from Roc-A-Fella records. Freeway dropped his first two albums with Roc-A-Fella: his highly acclaimed Philadelphia Freeway in 2003, followed by Free At Last in 2007. Now, the emcee has chosen to go with powerful independent label – Rhymesayers Entertainment. Some might shake their heads, but I find this as the perfect fit for Freeway. Rhymesayers will do their best to accompany their artists needs (producers, tours, etc.), and most importantly, let them make the music they want.

Freeway has always had a talented list of producers on his albums (Kanye West, Just Blaze, & Bink! to name a few). However, I felt his last album didn’t have enough chemistry and was off-balance. This time around he turned to the up and coming producer Jake One. This isn’t the first time they collaborated with each other… first, on Free At Last and again, on Jake One’s White Van Music. All three of their previous tracks have been fire. Hopefully this album will be the same, and give people that incentive we need.

1. Stimulus Intro
Featuring Beanie Sigel; Produced by Jake One
We get a preview of what the album is going to sound like in the first thirty seconds. Jake One lays down a nice track with a perfect mix of drums, strings, and pianos. Beanie Sigel lets the beat build, and then drops a hot verse. Freeway finishes the intro reminding us how well they sound together. Too bad this is the only track Beans is featured on. Nevertheless, this is still a great way to start the album.

2. Throw Your Hands Up
Produced by Jake One
The record starts to bang on the amplified “Throw Your Hands Up”. This is the perfect beat for Freeway, and of course he’s not going to disappoint us on a track like this. Here are a few of my favorite lines, “We’re bringing ya original flava, raised off De La, kept Black Moon in my boombox playa. Back in the day, I use to steal that nigga Rakim’s style when I flowed & I didn’t say may I”. Another quotable, “I remember when I was first trying to be a rapper guy, like Pharcyde, the labels kept on passing me by. Nowadays, when I hit them with the flow again, they like there he go again – the dopest Ethopian”. True rhymesayer!

3. One Foot In
Produced by Jake One
Another banging beat from Jake One. Freeway recalls on his way into the game, and how he still has one foot in the streets (the other in Hip-Hop). Nothing too significant here on a lyrical view, but Freeway’s flow makes it work, “I feel sorry for your mother, he missed the kick, I feel sorry for the punter”.

4. She Makes Me Feel Alright
Produced by Jake One
We’ve all heard the Rick James’ “Mary Jane” sample a handful of times. Nevertheless, we haven’t heard it from Jake One and unsurprisingly he finds a way to make it work. He definitely knows how to mix the sample in with the strings & drums. Freeway has some nice lines, but the beat is what really stands out.

5. Never Gonna Change
Produced by Jake One
“It’s like the Biggie Warning” are the first words on the track, and that’s exactly what it is. However, this song is Freeway’s version. He showcases some great storytelling that fits with the beat. On a production note, the beat is nothing less than amazing. This time around he shifts the drums around, and Freeway does a great job adjusting to them.

6. One Thing
Featuring Raekwon; Produced by Jake One
Jake One doesn’t stop bringing the heat, and this sample couldn’t get any better. Freeway starts the track and does his thing, but the highlight of the track is Raekwon. The Chef completely murders this shit. When was the last time Raekwon put out something, and it wasn’t fire? This is by far my favorite track on the album.

7. Know What I Mean
Produced by Jake One
This is the shortest song on the album (excluding the intro). The beat is good, but it falls short compared to the rest of the album. Freeway drops some decent lines, but nothing that stands out. I’d still rate this as an above average track though.

8. The Product
Produced by Jake One
Freeway compares himself to everyone’s own choice of drug. To this point of the album, that’s exactly what this record has been to me – a drug I can’t resist. He has some nice comparisons here, “I can make you act right, just put me in the crack pipe, everybody want to see you back on the mic, you need a… energy boost, you need some smack in your life”.

9. Microphone Killa
Featuring Young Chris; Produced by Jake One
Fellow Philadelphian rapper Young Chris joins Freeway on this up-tempo beat. Freeway spits some nice lines, but once again the track’s highlight comes from the guest appearance. Young Chris takes no time to body the track, “Microphone killa, no Cam’ron, bomb like land mine, I don’t ask shit, I demand mine”. Freeway should really thank Beans, Chef, and Young Chris for bringing some of their best stuff to the table.

10. Follow My Moves
Featuring Birdman; Produced by Jake One
If you haven’t heard, Freeway supposedly signed with Cash Money Records as well. And having Birdman on this album doesn’t make it hard to believe. Birdman sticks to his formula about money, cars, & weed, and Freeway follows. I felt that Freeway could’ve done better on the mic, but at least he didn’t get outshined this time around.

11. Sho’ Nuff
Featuring Bun B; Produced by Jake One
Freeway keeps it in the Dirty South for one more track. Jake One does a nice job on the beat too. Is it just me or does this beat sound like it will fit perfectly on a UGK album? Freeway does his best to keep up with Bun B, but it’s not the easiest thing to do against a Hip-Hop veteran. This is a nice track to ride out to.

12. Freekin’ The Beat
Featuring Latoiya Williams; Produced by Jake One
Things start to really slow down on the soulful “Freekin’ The Beat”. However, in a way the lyrics stay rugged. Freeway takes on a different approach of freekin’, and gets down on the beat. His lyrics do a fine job of making you think he’s speaking on a female. If you’re not a good listener, you might even think this is a love song. Hip-Hop needs more concepts like this.

13. Money
Featuring Omilio Sparks & Mr. Porter; Produced by Jake One
Jake One seems to get back on pace with a nasty set of drums. Freeway spits first recalling his past hustles to earn a dollar. Next, Omilio Sparks spits on a related point of view, and lets us know what his main purpose is money (Porter is on the hook). Freeway finishes it up on the third verse, and tells us how he’s in the same type of struggle as much of the economy is. This is a song the album needed to fit its title.

14. Free People
Produced by Jake One
“Free People” is another song about how the recession is hitting a lot of people hard. Jake One throws on a nice smooth beat Freeway can spill his thoughts over. This goes out to all the people lost right now with no money, job, or hope.

15. Stimulus Outro
Produced by Jake One
It’s to the part of the album were you can tell it’s nearly done from the sound of the beat. Freeway responds to a few fan letters and lets us know why he named the album The Stimulus Package; “It’s the reason why we named our album Stimulus Pack, all the fans givin’ us love and we givin’ it back. I’m not going to hate on the state of Hip-Hop; in fact, all I’m here to do is give ya real rap”.

Bottom Line:
Two months into the year and I’ve only listened to two albums. The first was In Search Of Stoney Jackson which featured superb production by Madlib. Then, Jake One hits me with The Stimulus Package. I can only hope that the production for the rest of the year is even close to these two records. Not only was Jake One on top of his game, but Freeway shaped this album for the people without losing that “Philadelphia Freeway” touch. In conclusion, this is a banging album that NO ONE should pass on. Furthermore, the album comes with a free instrumental download that is a gift considering how hard this album bumps.

On a side note, Brent Rollins designed the album’s creative artwork and packaging. This alone is a good reason to buy the album. He also designed Blackaliscious’ Nia, Mos Def & Kweli’s Black Star, Spank Rock’s YoYoYoYoYo, Gang Starr’s Full Clip & Moment In Truth, Evidence’s Weatherman LP, Boyz N The Hood logo, and a handful of other great art. Click here to get an example.

One more thing, Jake One & Freeway got selected to perform at this year’s Paid Dues Festival in Los Angeles. If you happen to live in that area, I highly recommend catching this year’s show. Peace.