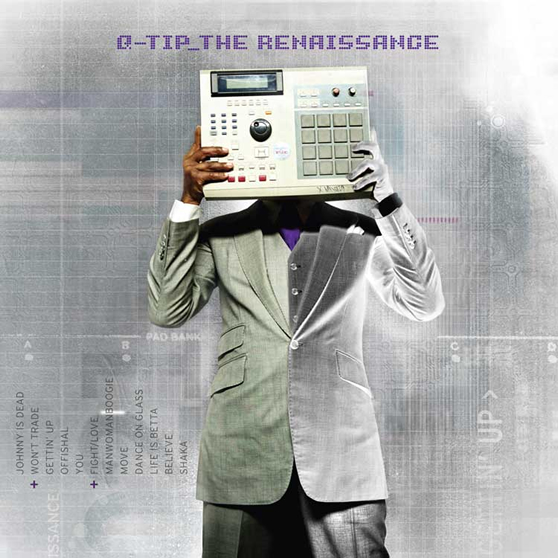 He is simply a legend in the game. Tip is one of those guys that just knows how to make good music. From all those years with A Tribe Called Quest (ATCQ), to his solo debut and the little heard jazzy Kamaal The Abstract, its evident that dude just gets it. He’s benefited from always having his own lane so trying to know what to expect is to your detriment. That said, what do we get with his latest offering?Let’s get Wright to it.

1. Johnny Is Dead
Produced by Q-Tip
His debut album came out in 99′, but this sounds like it picks up right where that left. Deep base, infectious dance groove and the light piano playing over the track, this is what Tip does. His delivery is classic Q-Tip on this one, and abstract indeed.

2. Won’t Trade
Produced by Mark Ronson & Q-Tip
Ronson lends his award winning skills to this track and it works out okay. The loop and repeat of this track and the previous track are a bit more noticeable since they are back to back, but they still are okay. Musically, both tracks are pretty cool. Q-Tip playfully weaves metaphors about relationships with sports in this tale with a sample that sings “I wouldn’t trade it for nothing”. This is the quintessential feel good song.

3. Getting’ Up
Produced by Q-Tip
Gone but not forgotten…Dilla’s influence is all over this single. The R&B and jazz influence is undeniable as musically, this is probably the deepest track on the album. The feel of this track is a lot like the feeling you got when you heard “Bonita Applebomb” for the first time. Again, lyrically, it fits with all of his previous work and if it ain’t broke, don’t try to fix it.

4. Official
Produced by Q-Tip
After a seamless transition from the previous track and continuation of scratching leads us into “Official”. The music on this track and the last are like, twin siblings as nothing is lost and the groove plays on. Tip finesses this one just as well with lines like “I raise the bar…for that I hit a chin up” and “I feel what the beat does/People fuck with me cause/When the song ends I become what the beat was.” He flips shit like this so effortlessly that most of the new Hip-Hop generation sleep on him hard. I really dig this track.

5. You
Produced by Q-Tip
Ever been in a relationship where you knew they were lying to you, but you couldn’t get away? Here’s is the track for you; it’s you…at the end of it all is you. Tip even cuts a deal with “We’ll make amends if you admit it/We can ascend if you committed” but we all know how that ends. The piano laced track is infused with a rhythmic snare that becomes the heartbeat of this love song when paired with the bass. This is one of my favorite songs on the album.

7. Manwomanboogie
Featuring Amanda Diva; Produced by Q-Tip
No doubt, this is a club jam; let the shaking begin. The title is no mistake as this one sounds very “Vibrant Thing” influenced, very uptempo. This song is strictly to make you move your ass, but Tip still finds a way to lace us with some pretty smooth lyrics.

8. Move
Produced by J Dilla
More Jackson influence on this one as Tip gives us another dance track. As with his previous songs, it’s hard to impossible to deny this one. I am not even a real big fan of the track, but the beat is hard to resist. I think the odd scratching and pulling of MJ’s voice throughout the track start to grate my nerves then the song changes. Around the 2:49 mark this song becomes the title track “The Renaissance”. The track is totally different and makes you quickly forget about the music before it. Good save.

9. Dance On Glass
Produced by Q-Tip
Music is art…this is Tip’s painting. Probably one of the hottest intro/lead in flows to any song as Tip rips it acapella for the first minute of this offering. The idea behind the track is stop submitting to the label heads and ringtone rap and be ready for some “real” music that is true to the essence and roots of Hip-Hop. The track is very sparse but it works with the entirety of the song. Get back to the lyrics. MESSAGE.

10. Life Is Better
Featuring Norah Jones; Produced by Q-Tip
Norah Jones has a great voice and Tip makes some great music; this should be good. Her voice lends itself nicely to a boom bap of a Hip-Hop track. Norah may have a great second career singing on the hooks of songs like this if she wants it. The song is about how much better life/Hip-Hop is with the blessings of some musical legends that Tip lists with his signature flow. I guess you can say that this is Tips love letter to Hip-Hop.

11. Believe
Featuring D’Angelo; Produced by Q-Tip
We get another well played collabo as “Soul-Hop” reigns supreme once again. D’s vocals and musical fingerprint are all over this track. I’ve can’t remember hearing one word flipped this many times in a song without getting boring. Tip flexes his lyrical dexterity all over this brisk 2:57 track. It seems a LOT shorter than it is, as 3:00 seems to be about average nowadays.

12. Shaka
produced by Q-Tip
This HAS to be a lost track from the ATCQ days. It fits in perfectly with Low End Theory and is a dope way to end the album. The track dances the line of familiar and futuristic. When you first hear it, it doesn’t seem to work, but as it plays on, you find what Q found when he put it together. Shaka is another dedication track and a well done one at that.

Bottom Line:
This album is a great “follow up” to his debut album and another feather in the cap of one of Hip-Hop’s finest. Tip has perfected his craft and found a way to make his voice become part of the track on anything he touches. He has the ability to make simple dance songs sound like the deepest intellectual song ever made while justifying you giving him a pass on a song that you normally wouldn’t give a spin too. He is one of the purest in the game that has managed to create his own lane effortlessly and managed to make some of the most timeless music period. Essentially, Tip has had 2 music careers from ATCQ to his solo career, and doesn’t seem to be slowing down anytime soon. This is definitely worth a purchase and another offering that makes Hip-Hop cool for older cats too.