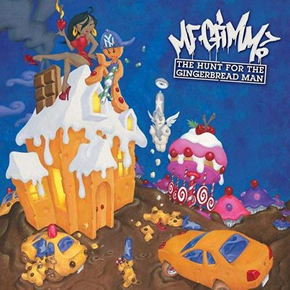 Mr. Jones stepped up and gave us an interesting look at one of the more fascinating people in all of Hip-Hop. I didn’t know much about MF Grimm before this, but after reading some stuff about the dude, he got a story that could be a Hollywood movie. Enough of me talking let me let Mr. Jones tell you guys about MF Grimm. If you want us to feature some of your columns or reviews, visit the FORUMS and drop it there, if we like it, we’ll post it up to the site.

Percy Carey, also known under MF Grimm, is a rapper from New York who has been writing other rappers rhymes for years. As a young rapper, he would ghost write for just about any rapper, including the much famed Dr. Dre and many of the rappers off Death Row Records. The Hunt for the Gingerbread Man is the fifth album by the rapper, and it is status quota for MF Grimm; dark, bleak rapping and New York style Golden Age sampling with the ever-so-sweet scent of experimentation through rash idealism and odd-ball MF Doom-esqe concepts.

The Hunt for the Gingerbread Man is not anything like the three disc American Hunger, and is much better so. American Hunger was incredibly diverse, with tracks having several different ideas and concepts. It worked there because the album had three discs, an hour each, and the material remained fresh and brilliant throughout. The Hunt for the Gingerbread Man isn’t nearly as diverse as American Hunger, but since it’s a fairly short album, it works much better as a cohesive whole.

As much more a united effort, The Hunt for the Gingerbread Man also has a much more united in beats and production, sounding much like early 90s Wu-Tang style with a modern twist. Beat-wise, The Hunt for the Gingerbread Man doesn’t stand out from the crowd, but revitalizes the drab, dark Wu-Tang style minimalistic beats that made the 90s such a great time for hip hop. Hypnotic piano lines, haunting vocal samples, eerie orchestration, along with some extra distortion on the drums help to create the classic New York atmosphere.

Lyrically, MF Grimm stays consistent, he still writes the same murky New York rhymes, but this time with a new set of metaphors. Because of that, he works with candy concepts and metaphors that have to deal with the land of ‘Gingy’. In that way, The Hunt for the Gingerbread Man is fairly similar to MF Doom’s MMM… Food, as they both deal with concepts to build their rhymes over, but that’s where similarities end. The Hunt for the Gingerbread Man is a concept album whose story is based on that of the “The Gingerbread Man”, except with a much more thug-like addition. We introduce the Gingerbread Man, or ‘Gingy’, a murder and hustler of candyland, and for a while, it’s just ‘Gingy’ and his murders, his own philosophies, and the industry of hip hop. Then we introduce the beginning of the real story in “The Fox”, where we introduce The Fox, a former gangster who got caught, and was willing to do anything to get out of jail time. Gingy cut himself out of his stomach, cut out his organs, and ate him. Because of the murder, Gingy is a fugitive, with stories of escape and FBI (“Fame”), sex (“My House”), and his own deeper thoughts (“Earth”).

As just a regular album, The Hunt for the Gingerbread Man is an average for MF Grimm and an excellent underground rap album with influences ranging from Liquid Swords to MMM… Food, while managing to hold itself together as a concept album, with a consistently interesting and sometimes funny story that flows together well. I would recommend The Hunt for the Gingerbread Man to anyone and everyone.

Recommended:
“Earth”
“Gingy”
“The Hunt for the Gingerbread Man”