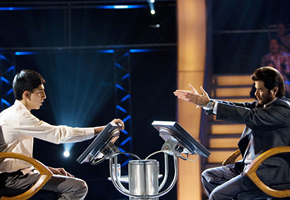 On Christmas this year, I did one thing I usually can’t do: Just chill. I also got to watch 2 movies. One was Bill Maher’s documentary Religulous and the other was Slumdog Millionaire. Now, I’ve been hearing about Slumdog Millionare since it’s release earlier this year and continued to hear about as it won tons of awards and critical acclaim as well as topping a heap of “Best Of 2008” lists. I was always intrigued about the story (Which I really can’t do justice to explain fully, so I stole 99% of this summary):

The story is about Jamal Malik, an 18 year-old orphan from the slums of Mumbai, who is about to experience the biggest day of his life. With the whole nation watching, he is just one question away from winning a staggering 20 million rupees (Around $400,000 U.S.) on India’s Who Wants To Be A Millionaire? But when the show breaks for the night, police arrest him on suspicion of cheating; how could a street kid know so much (Oh yeah, slumdog = project kid)? Desperate to prove his innocence, Jamal tells the story of his life in the slum where he and his brother grew up, of their adventures together on the road, of vicious encounters with local gangs, and of Latika, the girl he loved and lost. Each chapter of his story reveals the key to the answer to one of the game show’s questions. Each chapter of Jamal’s increasingly layered story reveals where he learned the answers to the show’s seemingly impossible quizzes. But one question remains a mystery: what is this young man with no apparent desire for riches really doing on the game show? When the new day dawns and Jamal returns to answer the final question, the Inspector and sixty million viewers are about to find out. At the heart of its storytelling lies the question of how anyone comes to know the things they know about life and love.

The film is directed by Danny Boyle (Who also directed films Trainspotting, 28 Days Later, & Sunshine. Dude can direct all types of movies). Even though Slumdog Millionaire is not a gutta, it still reminds me a little of City of God in a way because it shows you that the hardest hoods is not in the USA. After Requiem For A Dream last week (which I’ll NEVER watching again), it felt good to watch something inspirational this week. You pull for the lead character because you see his struggle and hopes he comes out of it and while this is not a “Hip-Hop movie”, I think anyone can relate to that. I can honestly see why this movie is getting all the praise it’s receiving and this is a good movie for 2008’s last Friday Night ‘Fro (But please keep those recommendations coming in the forums). Peace & Enjoy.