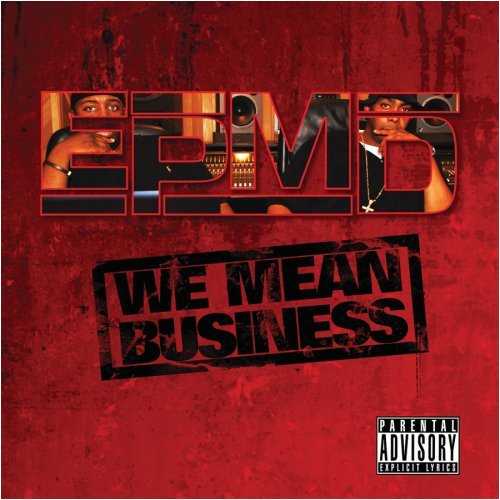 No group has ever meant business like EPMD. Parrish Smith and Erick Sermon are the epitome of business. Erick and Parrish have been makin’ dollars for over 20 years now. They released their first album in ’88 (Strictly Business) and have been East Coast legends since. As a group they have faced a fair share of turmoil. They separated in ’93 and re-united four years later. It wouldn’t be for long though because Erick and Parrish haven’t released any material for over nine years. Until this December that is when they released We Mean Business amidst controversy of the lack of DJ Scratch. DJ Scratch has been an important part of every EPMD album. In many senses, he is just as important to the group as Erick and Parrish are. So the questions is can they overcome his loss?…

1. Puttin’ Work In
Featuring Raekwon; Produced by Ty Fyffe
Not a bad start. It’s kind of refreshing to hear an album without a rap intro. And it’s even more refreshing to hear these Hip-Hop pioneers together. Don’t get me wrong though, this song is far from perfect, but it’s also far from obscurity.

2. What You Talkin’
Featuring Havoc; Produced by Erick Sermon
I could do without the superficial hook and the over-exaggerated instrumental, but this track is alright. On a sidenote, I’m surprised Soulja Boy hasn’t said anything about EPMD yet. They hit him with this gem: “The Oscar De La Hoya, the golden boy/I’m not dude, don’t believe I’ll show ya boy/Ask Destiny’s Child/ I’m not Soulja Boy”

3. Roc-Da-Spot
Produced by Erick Sermon
This is definitely what you’d call classic EPMD. The funk sample, the Biggie sample, the hook. Well done. I was feeling this one.

4. Blow
Produced by Erick Sermon & JFK
The first two verses were fire. The last verse was just off. I don’t know if it was recorded separately or what, but it just did not sound good at all. It’s a good song despite all that though.

5. Run It
Featuring KRS-One; Produced by Erick Sermon
KRS-One the black educator telling people “Get down on the floor” and making all sorts of ambience sound? Am I missing something? Isn’t he supposed to be busy being a positive influence to youngn’s? By the way, this song is terrible.

6. Yo
Featuring Redman; Produced by Erick Sermon & Marc Berto
Best song off the album period. I said no discussion! Who told Redman it was OK to outshine EPMD on their own album?

7. Listen Up
Featuring Teddy Riley; Produced by Erick Sermon
Some songs would be better acapella. This is one of them.

8. Bac Stabbers
Produced by EPMD
You know the phrase “Good idea, poor execution”? Well, this is a case of “Poor idea, good execution”, if that makes any sense at all. Leave it to EPMD to make a song for the bac(k) stabbers, and equip some old-school techno sample.

9. Never Defeat ‘Em
Featuring Method Man; Produced by DJ Honda
Erick Sermon sets it off over this engaging instrumental and Method Man bodys his verse. But then Parrish put me to sleep, he does not sound good over this instrumental.

10. Jane
Produced by Parish Smith
Every EPMD album has a song called Jane. It is typically just a song for the ladies, and it’s no exception this time.

11. Left 4 Dead
Featuring Skyzoo; Produced by 9th Wonder
This song sounds the same way it looks on paper. EPMD is the essence of true school Hip-Hop, 9th and Skyzoo are two cats who are taking Hip-Hop where EPMD took them before. Needless to say, this track is crazy, and definitely worth checking out.

12. They Tell Me
Featuring Keith Murray; Produced by Parish Smith
Keith Murray and EPMD have done some classic work together, this is not indicative of that at all. Skip/delete/sleep/right click… whatever you have to do, this one is not worth your time.

Bottom Line:
This album will not attract any new fans for EPMD.  They stuck to an old formula with the exception of “Left 4 Dead”, and will most likely only appeal to old fans.  Still it’s a good album, and you should definitely check it out if you haven’t already done so.