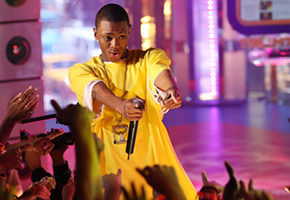 What? You thought I was gonna miss out on telling you how much Plies and Soulja Boy sold last week. Consider this a early X-Mas present; The Numbers Game is here a day early (Now in paragraph format!). A lot of artists benefited from the holiday shopping boost (while some didn’t). Well since H20’s iSouljaboytellem review last week had the comments jumping, we’ll start there: After all the debate on Soulja Boy, the kid’s sophomore album performance on the charts was underwhelming with only 45,000 copies sold and a #43 debut on the charts. Hey, I think SB’s hustle was good, but this might be the beginning of the end.

One person who won’t stop (releasing albums that is) is Plies. Even though homie gets a lot of hate, somebody out there loves him. His third album in 2 years, Da REAList, pushes over a 100,000 copies. I guess that means we can expect more albums from Plies (And more goon references).

Did anybody else know that DJ Drama & Lil’ Wayne was releasing a retail version of Dedication 3? Well they released it last week  and over 8,000 people knew about it and purchased it. Other than the actual mixtape not really being that good; Why would anyone buy a mixtape by an artist who is officially giving it away for free online? The Weezy fans are dedicated…

On the R&B front, all the debuts in the Top 50 all sold at least 100,000 albums. Keyshia Cole’s A Different Me gave her the #2 spot with over 300,000 copies sold (Country powerhouse Taylor Swift only beat her by 6,000 copies for #1 spot). Hey, I guess this shows that Keyshia has some real fans out there. Jamie Foxx‘s second album, Intuiton (It’s officially his third), also did pretty good coming right behind Keyshia Cole at #3. It’s funny because Thic Saule actually recommended Foxx’s new album to me in the forums and I brushed him off (Saule: 1, B-Easy: 0). Just to prove that this was a good week for R&B, Anthony Hamilton‘s new album, The Point Of It All, debuted at #12 and sold 130,000 copies. I like Anthony Hamilton, but I had no idea that he had an album coming out. None.

That’s all I really got for today; Here’s the half assed numbers. Shit, it’s the holidays. Peace.