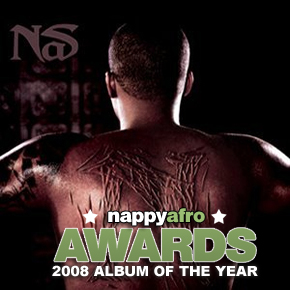 Hip-Hop has always been a reflection of a small segment of the global community. Now Hip-Hop has become a global community. In such a climate, you get a lot of pressure to conform to the instant hit’s now (“ringtone era”) and leave consciousness in the underground circuit. Nas refused to conform and offered us one of the best albums released this year, and one of the best all time.

We have a Black man becoming President, a war that seems to be endless, and an economy that is failing globally. Hip-Hop is the voice of a people and Nas took this opportunity to raise his voice and be heard. I wasn’t on board with the original title of his album at all, but with the name Untitled and the cover (another reason this album is classic) there is no mistaking what is going on with the album. Provocative, edgy and precise are how I would describe this album. The fact that this album hasn’t done numbers isn’t a mistake and proof that numbers DO LIE. I have already declared this album a classic, 5 star album, if you haven’t, listen again.