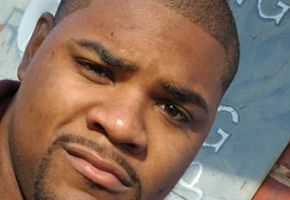 BDub slide us an interview he did with up and coming rapper A. Pinks. Who is A. Pinks? With videos on MTV and BET, a spot in The Source‘s “Unsigned Hype” column as well as a new mixtape Will Rap 4 Food, our homie BDub sat down with the Queens MC to explain why we all should “Think Pinks”. Here’s some excerpts:

Q: For those who are straight sleeping, who is A. Pinks?
A: A. Pinks is young, black, educated man that happens to rap. I’m pretty much a ordinary fellow with an extraordinary vocabulary. I don’t start trouble, smoke(eh!) or fabricate. I do drink, joke and fornicate. I like chick flicks and salmon croquettes, and I don’t like hockey or American Dad. At the end of the day I’m a down to earth dude that goes stupid on a drum kick.

Q: You’re an educated dude – Howard University. What did you study?
A: Well, I like to think so..lol. I actually started at Howard as an advertising major for a little while. I figured I could offer my creative services to some sort of agency and get my Jamie King on writing jingles for Snuggle or some shit. After a few failed journalism courses, I decided to switch to Radio/TV/Film, which I’m betting is a tad bit more up my alley.

Q: How did you hook up with Whoo Kid for your first mixtape, Its Not A Rumor: Google Me?
A: Ahh the infamous “‘Sada Pop”. We actually linked through a publicist we were both working closely with. I was looking for that first big injection into the public eye and she took the music over to the man himself. He was a fan of my work and we went from there.