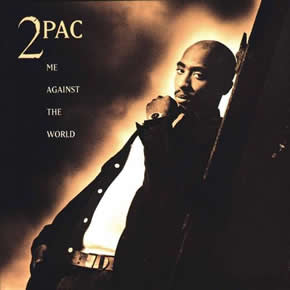 I was thinking about which album to choose for Classic Week, when it hit me: Pac STILL wasn’t under our Classic Material! What?!? Like Biggie, even though he was cut down in his prime at the young age of 24, 2Pac’s music is still played today. Just look at all the posthumous albums that come out every year. However, I’m gonna talk here about his GOOD music, which includes the classic album Me Against The World. It’s often described as pioneering the “nothing to lose” persona that you see many rappers bragging about all on BET. When Pac released this album, he really DID have nothing to lose. He was found guilty of rape and less than a week before he was infamously sprayed in a hotel lobby, not to mention the media always on his ass. This is shown right from the get go. On the “Intro”, it’s all news clips about Pac, and how they portrayed him. Then, right after, he jumps on “If I Die 2nite”, a vicious song about how he’s ready when his time comes: “Who shall I fear/Don’t shed a tear for me nigga, I ain’t happy here/I hope they bury me and send me to my rest/Headlines reading murder to death, my last breath/Take a look, picture a crook on his last stand/Muthafuckas don’t understand if I die tonight!” 2Pac has never been the most lyrical rapper, but like Ice Cube, the words he says are enough to hook you in.

2Pac also shows he can write about songs other than ghetto tales on the album, including the unforgettable classic, “Dear Mama”. This song is arguably one of, if not the, greatest hip-hop songs ever! Every Mother’s Day, whether she likes it or not, my mother knows I’m gonna play this for her: it’s that good. Even almost 14 years after this album came out, and you still got rappers giving shout-outs to they mamas! That’s how influential ‘Pac was. In “Can U Get Away” he talks about a woman he’s attracted to who’s in an abusive relationship, urging her to “get away”. I don’t care what anybody says: ‘Pac always had love for the ladies. Between this and “Keep Ya Head Up”, 2Pac almost a glorified feminist (in a good way).

One more area where this album shines is off the production: it’s phenomenal. The soulful feeling that you get combined with ‘Pac’s lyrics are just nothing less than classic. The title track is a great example of this: you got 2Pac shooting the crazy lyrics at you and a soul singer killing the hook, giving the song more emotion. That is what makes this album so good: 2Pac is so skilled as a rapper, the emotion that he uses in his rhymes really grab you, even if he’s not going for the throat lyrically. He’s just spitting true life reality on the beat, and the production only helps him. I could keep going all day about this album, but the bottom line is that if you haven’t already, you NEED to get up Me Against the World.