Boogie Down Productions – By All Means Necessary [1988] 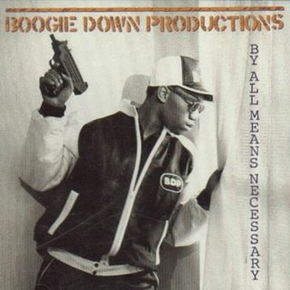 The Golden Age in Hip-Hop was essentially a Harlem Renaissance of the Hip-Hop community. Hip-Hop wasn’t even 20 years old when we it reached the mastery and embrace of the Golden Age. Creativity, expression, and various styles and topics were abundant during this time and everyone had their own angle. Groups were asserting their need to party, their love of their blackness, the mentality of the hood, and the embodiment of being an emcee. However, in 1988, a new voice was born.

Boogie Down Productions used their own personal loss to voice the disgust of a community. The groups original DJ, Scott La Rock, was gunned down at the young age of 25 after trying to stop a beef in his hood. BDP’s first album, Criminal Minded, was essentially the antithesis of this album. After putting out a violent and gansta minded album, the group abandoned that ideology and became arguably the first largely political rap group. This album not only depicted KRS-One posing like Malcolm X on the cover, but with title in tact as well, they attacked the same ills of the community that Malcolm X, Black Leaders, and nationalists took particular issue with. If you haven’t heard this CD, get a copy, By All Means Necessary. This may be a credit to it’s staying power, or a statement about our stagnancy, but the problems this album addresses are just as prevalent today as they were more than 20 years ago.