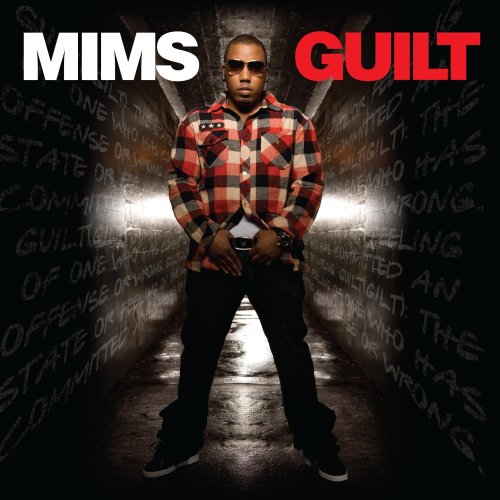 Mims. A pioneer of the “ringtone” rapper hustle. The war still rages on now; either you’re trying to move an album or you’re banking on Platinum ringtone/digital single sales; with the latter looked at as adding further to the unnecessary commercialization of the art.

I call Rida, Flo and Tell Em’, Soulja Boy to the stand. I digress.

I like Mims. If anybody caught some serious hate, especially in my Southern stomping grounds, it was the artist I’m reviewing at this moment. “This Is Why I’m Hot” was loved or hated, but the success that surrounded the song could not be denied. “Like This” failed to garner much steam and Music Is My Savior sold modestly, leaving Mims hanging in one hit wonder limbo with J-Kwon [Man was “Hood Hoppin’” a hit or what? –end sarcasm-] and Rich Boy.

Many dismissed him based on “This Is Why I’m Hot” and downed his basic, yet more than meets the eye flow. Taking a chance and listening to his last album, which had stumbles admittedly; I noticed there was promise underneath the mountain of hate he was buried under. Mims is a student of the game, with an obvious passion in his rhymes about Hip-Hop and music in general. The package is there, but can it be displayed? Can Guilt dispel the unevenness from the last album and distance his image from that of a ringtone royalty?

1. Guilt
This I wouldn’t have chose this to intro the album, although I understand WHY he chose it. A laid back, bluesy beat is laid down for Mims to rap about his issues (vaguely) with the rap game and his image in general. Try as he might, Mims is not Jay-Z and just doesn’t pull off that “reflective opening” style like Hov has perfected album after album. Too by the numbers and not enough emotion to make me believe what he’s saying, despite a steady flow.

2. The Skit
Produced by Da Internz
I enjoyed this. Merely a skit, but so original. It’s a conversation in a barbershop between a customer and rap “enthusisses” Murder Death Kill AKA MDK proceeds to say every hate I’ve heard about Mims since his debut 2 years ago and it’s refreshing that a rapper would willingly let himself get ate up, with pretty much no get back by the end of the skit. It shows confidence. Also goes a long way that “The Skit” is actually funny.

3. On & On
Produced by Da Internz
Enjoyable. The beat reminded me of ”Roses” by Kanye West, but distanced itself as it continued in a major way. It suits Mims laid back flow as he explains what he’s about in the rap game, answering a few questions along the way. This could have led the way easily, showcasing Mims rapping HIS style with an original beat that compliments.

4. Love Rollercoaster
Featuring LeToya Luckett; Produced by Da Internz
The obligatory relationship problems rap. Nothing really standout about this track, and by the numbers tracks like this do not help Mims at all, considering he’s still trying to flesh his style to begin with. LeToya brings it for her verse towards the end, but the material is so “been there, done that” on her part and Mims, it becomes an easy track to pass on. You’ve heard this done better elsewhere.

5. Move (If You Wanna)
Produced by Da Internz
NOW we’ve got something. This is the first single they released and for good reason. A little bit of chop and screw, heavy drums and bass, and Mims slides in and out of the beat with ease. This also marks the track where he FINALLY brings the punches and wordplay that won me over in spurts with his last album. For example…

“Don’t understand how can I have so many ha-ters /
Knowin’ I’m their father like my name is Darth Va-der /
I can get you hemmed up while I’m bein tay-lored /
Then I slide off to the side like a fa-der /
HOMEY I’M THE PRESIDENT, GOVERNOR AND MA-YOR!!! /
I CONTROL EVERYTHING, LIKE A DIC-TATOR!!! /
GET YOU BIZ MARKED UP, TURN YOU INTO VA-PORS!!! /
IF YOU GOT A PROBLEM GET YOU SWALLOWED LIKE A CHA-SER!!! /”

Tracks like this prove people are catching too much sleep on Mims. Money in the bank, and I’m not talking Swizz.

6. One Day
Featuring Ky-Mani Marley
WHY?! Ugh. I hate a bad song. More than anything, I hate a song that could have been great, but little things destroy it. Marley has a wonderful feature and the beat is well done, easy on the ears. Then here comes Mims using the new fad of the rap game, Autotune. It does his voice no favors and completely kills what could have been another solid number on this album. He would have been better suited without it or perhaps spitting as opposed to taking that kind of risk. Disappointing.

7. Chasing Sunshine
Featuring & Produced by KVN
I’m noticing Mims is striking gold on these beats featuring real instrumentation. The guitar, piano, and ESPECIALLY the violin portions elevate this song to must listen status. This is the reflective number he should have aimed for with Guilt. The emotion is dead on and features better storytelling. It only helps that the beat evolves with Mims as he experiences highs and lows on his memories. KVN’s feature is understated, slowly growing on you as it continues. He’s not meant to overpower the track and you realize this as it soldiers on. I believe him on this.

8. Rock ‘N Rollin’
Featuring Tech N9ne; Produced by Jim Jonsin
We slow things down here, as Mims makes sure you catch every rock related metaphor he’s prepared to throw at you. This track is definitely blazing if you can follow all of the references. A section if I may…

“Find me at Linkin Park with a Motley Crue /
You say you know the what but you do not know The Who /
Pay attention you could miss it if you Blink 182 /
And me I’m the one, just like I’m U2 /
Unforgettable fire, burning like the Wailers /
My life’s a motion picture, and this is just the trailer /
My suit’s a perfect fit just like it’s tailored /
Fuck her like an animal, I Nine Inch Nail her /”

And what a surprise on the feature! Tech N9ne drops a comfortable verse on this one, this kind of style made for his left-field flow. The metaphors alone make this worth the listen. The best isn’t particularly special, but the wordplay was meant to overshadow that anyway.

9. Be My Hustla
Featuring J. Holiday
Aside from Codeine related hook; pretty average stuff here. Holiday has never had a strong presence on a track voice-wise from what I’ve heard, leaving this void of a standout quality. Mims isn’t really working to provide that moment either; professing his love over the subject of this song with the usual drug related references. Again, Mims is not at his best when he’s trying a cliché style. It hurts him due to other rappers doing what he’s trying to do, but better. Inoffensive track, but easily forgettable

10. Makin’ Money
Produced by Da Internz
Whoever tailored this beat is an obvious Swizz Beats fan. Distorted sample hooked over and over, the usual “Hey”sample as it builds, and party drum patterns. Sounds like a rough cut of “Money In The Bank”. Mims hops on no problem; pity he’s not really saying anything out of the ordinary. He also falls victim of a few recycled metaphors from previous tracks. Not a bad track actually, just lacking. This easily could have found b-boy or club banger status with more fine tuning on production and the lyrical content.

11. In My Life (Why Oh Why)
Produced by Da Internz
Firmly in the “aight” category. He spits about taking risks and challenging himself in life for the blessings he has received. Oh the irony, because I’m not quite seeing enough of it on this album. Despite that, not a bad song here. I think they were aiming for an epic feel on the beat, but couldn’t quite nail it. This won’t hold a candle to the hottest tracks on this album, but this definitely has a place.

12. One Last Kiss
Featuring Solar Mesh
The strongest track of this album. Only “Move” could come close. Original, layered, emotional. The beat is never syrupy and drips of originality, yet stays grounded in enough hip-hop root not to lose you. Mims speaks on how he wish his mom could be here to see the things he has accomplished/has yet to accomplish, his love pouring through on this standout. Solar Mesh holds the hook together with passion in his voice, with just enough produced distortion to keep the song’s impact intact.

This is the fire I know Mims can create when he tries. He takes enough of everything and grounds it with his assured style to create a style that is his own. Listening to this, you can’t help but wish you had that one moment to tell someone, alive or dead, how much they mattered or how they affected you for the better. You won’t believe you’ve been listening to the same artist when you hear this. Thumbs way up.

13. Heal Me (Outro)
Featuring Soler Mesh
Solar Mesh follows up his supporting role in the previous track with another strong turn in this piano and drum rooted track. Mims seeks forgiveness and repentance for his sins, knocking out an extended verse in the middle of this short track, book ended by Mesh’s passionate voice. Short, to the point, and it never find the time to drag. Can’t knock that.

14. I Do
Featuring Nice & Smooth
The closer. A somber beat with enough energy to tap your feet to. This would be another track professing his love, but he accomplishes it in a way so that it’s candid, yet not alienating the listener. Nice & Smooth add to the track with singing and some Fatman Scoop style hyping, but I don’t see how their feature took it to another level. Not a bad way to close and again, this track finds Mims in his element of blending many styles to create one he can comfortably flow in. This must continue.

Bottom Line:
Mims drives me insane. He’s in that rare league with a guy like Cassidy where it just doesn’t come together when it needs to. He possesses talent that is beyond his ringtone rapper label and it shines through on tracks like “Move” and the especially brilliant “One Last Kiss”. What is holding him back from paving his own style? Every time he tries it on this album, it creates something special that set him apart from the pack. Then he decides to settle into the “safe’ topics and clichés of hip-hop and completely loses the steam he’s created. Uneven is the best way to describe this offering from the DC native.

Even when he stumbled on One Day by using Autotune, it took that to destroy what could have been another hit. I can’t knock a playa for taking risks you know? The problem is, he didn’t take enough of them to cement what Mims is about. Guilt is an album that could rise above and beyond, but chooses to take steps back, afraid to soar in a time where originality counts for so much in the rap game. That’s sad, because this really could have been the album that erased layers of the hate he receives. Now it’s just a lyrical lesson in weeding through average to get to the cool.