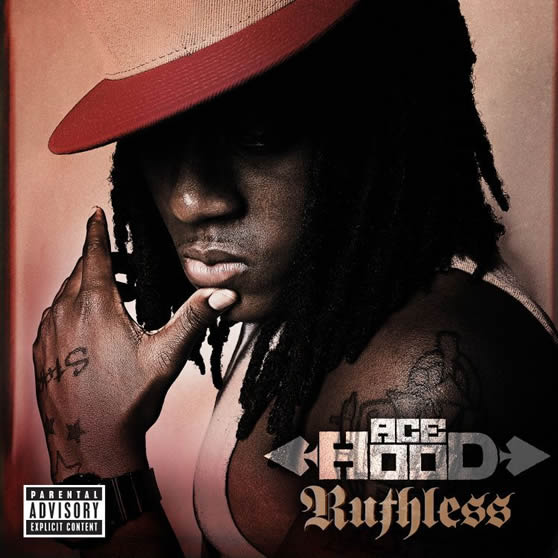 In Ace Hood’s short career, he has already accumulated a few accomplishments: Being the first artist signed to DJ Khaled’s We The Best Music, being named a Freshmen Of 09’ by XXL magazine, and finally releasing his debut album Gutta last year. But that doesn’t mean his road to fame hasn’t had its bumps. Gutta failed on the charts and as of this writing hasn’t surpassed the 200,000 mark in album sales. Some people would also go on to say that maybe he shouldn’t have been on the XXL Freshman class list (I won’t lie; I was one of those people). Not to say Gutta & Ace Hood didn’t show signs of talent; both did. But can the Florida native dodge the sophomore jinx and break from the pack with his new album Ruthless? Let’s find out…

1. Get Money
Featuring Rick Ross; Produced by The Inkredibles
On the first track, Ace Hood and Ricky Ross go back and forth on the subject of getting money over a high-energy production. It surprised me that this wasn’t Ace solo on the first track, but the song works and Ace holds his own; “You wanna ride you can’t be acting like Tre fool/NWA, I betcha Ace play Cube”. Rick Ross’ charisma does outshine (“Money ain’t a thang/I remain blinged up/100 on the chain/Bitch I think I’m King Tut”) but the song as a whole is a good start.

2. Loco Wit The Cake
Featuring & Produced by Schife
Even though this song is basically about flossing, I can see it being a hit in the clubs; the hook and beat does it; “Spent 30 in the mall (Goin’ loco with cake)/Five cars sittin’ tall (Goin’ loco with the cake)”. Of course this is subject matter that has been done a million times before and to be honest with you, it doesn’t really bring much new to the table. Ace says some stuff here and there, but listen to this one mostly for the production and chorus.

3. Born An O.G.
Featuring Ludacris; Produced by NJ Nasty & LVM
Ace Hood and label mate Ludacris link up here and to be honest the song sounds like something that would be on a Luda’s album. And being that, Ludacris takes control; “Speeding like demons/It’s reasons heathens is breathing hard/But I role with heathens that just just just don’t believe in God.” Both use a faster flow here and both turn in respectable performances.

4. Overtime
Featuring Akon & T-Pain; Produced by The Runners
Turn your Auto-Tunes up! Ace Hood gets both T-Pain & Akon on the Ruthless’ first single. In the song Ace uses metaphors comparing sports to his music hustle. The song isn’t terrible but it does lose points. The first is getting both Akon and T-Pain on the same track. I know both are big hit makers but on the song you can’t differential the two. Secondly, “Overtime” uses the same format we’ve seen many times before (Especially with Akon on the hook). It’s radio ready but not a stand out.

5. Champion
Featuring Jazmine Sullivan & Rick Ross; Produced by Carvin & Ivan & The Runners
I’ve previously written about this song and I’ll say it again, “Champion” is a winner. The beat provided and of course the scene stealing Jazmine Sullivan make this song. Not to say Ace (With a returning Rick Ross) didn’t show up. Both rap inspirational tales about the facing adversities. The music video also does a good job of giving people more of Ace Hood’s story. This is by far the best track off the album.

6. Love Somebody
Featuring Jeremih; Produced by The Runners
R&B newcomer Jeremih does the hook on the track. I guess it does what these types of songs are supposed to. Ace: “Live my life like a dream/Every king needs a queen/Girl my life is a movie/Sippin’ goose in Jacuzzi.” It’s okay. The beat reminds me of Usher’s “Love In The Club”.

7. Don’t Get Caught Slippin’
Produced by The Inkredibles
I just realized that this is the first song off the album with no feature. And that’s a good. This is a well-made song; Ace keeps to the subject matter (Always being ready for whatever), brings in a good hook, and sounds at home on the beat: “And I won’t be slippin’/The boys on a mission/Only vision of winning and my sight is on a million”. This is one to check for off the album.

8. This Nigga Here
Featuring Birdman & Schife; Produced by Schife
Like with his production on “Loco Wit The Cake”, Schife also provides the hook here as well as the beat. The song has Ace Hood describing what kind of “nigga” he is (“My money too extravagant to handle it”). The beat is done well but it’s your standard down south production. The Birdman feature really doesn’t add anything to the song.

9. Mine
Featuring The-Dream; Produced by Tricky Stewart & The-Dream
I’ve never really been a big fan of The-Dream but I cant front, this song grows on you. It actually sounds more like Dream’s song than Ace’s. The song deals with taken someone’s girl (Ex. Buying her stuff) and it would surprise me if this wan’t the next single. The-Dream makes up for the terrible feature he did on Rick Ross’ Depper Than Rap. “I-I-I I gets white boy money!”

10. Wifey Material
Featuring Lloyd; Produced by The Runners
I always feel weird when a rapper has back-to-back R&B features on an album. It always seems like it’s a bit much. This song isn’t really anything special and you probably can figure out what’s the song is about by the title. On second thought, Ace also raps about his rise to stardom (“I’m felling like Biggie Smalls when he wrote Juicy”). The Runners seem to have mailed it in with the production also.

11. Bout Me
Featuring Ball Greezy; Produced by Cardiak
Ace gets fellow Florida rapper Ball Greezy for this track and basically says what he’s already said on track 3 & 8. Once again, the song is not terrible but nothing interesting here is delivered. Plus, the beat does this weird thing that it does what it sounds like a flat line (Then again the producer of the song is named Cardiak).

12. Zone
Produced by G4 Music
Here Ace Hood does his best Jeezy impersonation here and goes heavy into the trap (“Anything you need a nigga got it by the zone!”). The production is generic but if you like hearing about “peter pan” or “birds flying”, I’m sure you’ll like this one. Me on the other hand…

13. Make A Toast
Produced by The Inkredibles
In the beginning of the song Ace says; “This is no longer music, it’s celebration homie”. I gotta give it to Ace, he conveys it in this song. This is him giving you his achievements (Signing to Def Jam, hooking up with DJ Khaled, and dodging prison life) and celebrating it all. It’s a nice way to end the album.

Bottom Line:
I know in some parts in this review, it may seem like I dislike Ace Hood; but it’s not that. I just think he needs to connect more with the fans and not be the generic hustler/flosser/gangster persona that populates most of Hip-Hop. He does do more to fix this that he did on his first album Gutta. Even when The Runners executive producing this album, I don’t know if this album will elevate Ace’s career (Especially with the lack of promotion given by Def Jam). But Ace Hood does show some growth, talent, and there are some bright spots on the album. If you liked Gutta, you’ll like Ruthless.