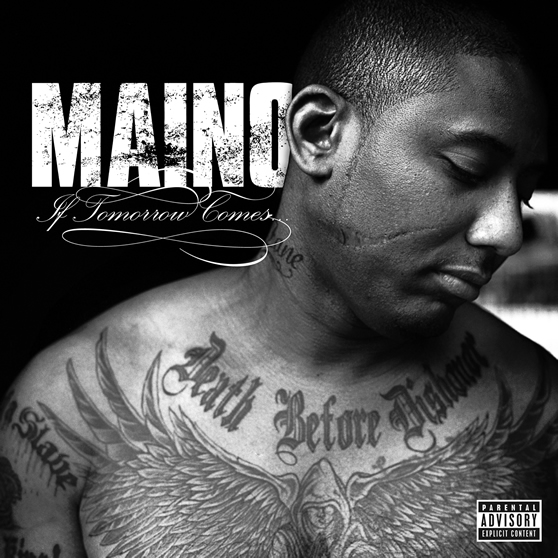 Coming out in a time where New York can’t buy a vowel in the game, Maino looks to restore the feeling in a city that has been on a steady decline over recent years. Hailing from the same borough of some cat they called “Biggie”, Maino is ready to shine the limelight back on the city that birthed this thing we call Hip-Hop. Having served a ten year bid, Maino started rhyming in prison and when he got out, a friend introduced him to DJ Kay Slay, this impromptu meeting turned into several mixtape appearances, and it eventually landed him and his Hustle Hard imprint a deal with Atlantic Records. The part of the game where you pay your dues…yeah, Maino has done that part, now it is time for his debut If Tomorrow Comes to drop after numerous delays. It’s hard to deliver when you got a whole state on your back, so let’s see how Maino handles the pressure.

Million Bucks
Featuring & Produced by Swizz Beatz
It’s Swizzy on the beat, so you know that you are going to get an uptempo club banger. On this track you got Maino giving us the New York version of “Turn My Swag On”. The song has a catchy hook, and the beat makes you want get down and two step to, and Maino might have another hit on his hands with this one.

Scene 1: If Tomorrow Comes (Skit)
This is really the album intro that sets up the tone for the album, which starts with his release from prison.

Back to Life
Featuring Push! Montana; Produced by GQ Beats
On this song Maino and Push! Montana go back and forth with each other, where Maino gets caught up on what has been going on in the hood, gets set up with some cut up, sees his PO, and makes his plans to start a label and get make it rapping. The story telling is pretty tight on the song, and the production is nice, so I have to give this one the nod.

Remember My Name
Produced by Dangerous LLC
Maino gets some nice production on this track and I have to say that I am impressed with this delivery on this track. The hook has a dancehall feel, but it fits together perfectly on the song. Maino comes out strong with this one.

Gangsta
Featuring B.G.; Produced by BlastOff
Keeping with the story, this is the part of Maino’s life when he fell back into the streets after his release, and who better to have a feature than Gizzle. The production is SICK on this one, and all respect to B.G., but Maino was too much for him on this track. Not saying that Gizzle’s verse was bad, but Maino’s were that good. BANGER.

Scene 2: The Meeting (Skit)
This refers to the meeting between Kay Slay and Maino.

All the Above
Featuring T-Pain; Produced by Just Blaze & Nard & B
This doesn’t sound like your typical Just Blaze beat, so I wonder how much he did on this one. Don’t sleep on the production, it’s DOPE, and T-Pain on the hook works well with Maino, and it looks like he has another one in rotation on the radio.

Scene 3: Hating (Skit)
The title says it all. Everybody has heard somebody do this before. 100% Pure Hate.

Hi Hater
Produced by Mista Raja & Maino
This might have been NY’s biggest song LAST YEAR, but when it was hot, Maino got a hood saying, t-shirts, and a hot remix out the deal. Just think what he could have done had he dropped when this was popping? I still can’t help banging this one.

Let’s Make A Movie
Produced by Mista Raja, D. Smitty, & Sef Millz
This is you obligatory song for the ladies. It’s up to you how far you want to go, and Maino kept it G on this one, no singing, just a song that will have the strip clubs and hood girls going crazy.

Kill You
Produced by GQ Beats
On this song Maino pulls a Marshall Mathers and makes a song about the stress of a baby mama. The song works because it is a hood version of “Kim”. I know I said this earlier (JSK) but Maino has really impressed me so far.

Scene 4: Contemplating (Skit)
On this skit Maino questions if rapping was in the cards for him or will he be in the streets forever.

Runaway Slave
Produced by Versatile & Dilemma
This is the first song on the album that I wasn’t feeling. Nothing about this song worked for me. I have to break out the SKIP button on this one.

Soldier
The production reflects the title of the song and Maino represents for the streets on this one. Maino definitely hasn’t lost touch with the streets, and it shows on this track. Plies would have been a good addition, but Maino kept it 100 all alone.

Hood Love
Featuring Trey Songz; Produced by Dangerous LLC & Marcus D’ Tray
This is the fourth of five singles Maino has on the album. Trey Songz has become the R&B guy the street guys get to jump on a track. A new age Kells without the urinating and young girls (allegedly). Maino tends to do well with radio friendly songs. He might have another hit with this one.

Floating
Produced by Nard & B
This is another slip on the album from Maino, the production is lackluster, and the hook is lazy and annoying. I have to break that skip button out again.

Scene 5: The Phone Call (Skit)
Maino gets the call from Brian Berger from Atlantic and Maino finally made it.

Celebrate
Produced by Versatile & Brian Berger
This is run of the mill last song of the album, but on this one Maino lets the beat ride for ten minutes just so he could talk about how good it feels to finally be at the point that he always wanted to be. You could easily call this one a victory song for Maino. I am not mad at him at all for this one.

Bottom Line:
Maino was not really on my radar before this review, but I do have a respect for him after listening to his album. Maino album was well put together and besides those two slip ups, he had a respectable debut. Maino told us his story, and while we might have heard this story before, he did make it interesting. Maino has an ear for the streets and if he can keep coming up with catchy songs, he might be around for a while. Is this the album that is going to swing the pendulum back to NY…probably not, but it does inject some life back into New York.