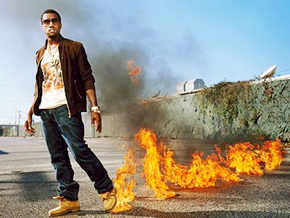 Say what you want about Kanye, but he is one the best artists out there. I didn’t always follow dude because of his actions, but I admit to NOT going with the flow so easily. It took me a while before I started taking the guy seriously, but when I did…I started liking the guys music. Which brings me to this song. I was late on the Kanye bandwagon, so please give me a late pass for this one. “Last Call” IMO, is one of his best songs. for some reason I think that Ye is a better artist when he is being humble. Some of his antics will draw the casual fan away (that is what happened to me in the beginning) but when you put that to the side, Yeezy is a pretty dope artist. Having playing that “underdog” status most of my life, I can relate to Ye on this one. He got me from the jump with this one: The all around the world Digital Underground, Pac/The Rudloph the red nosed reindeer of the Roc/I take my chain, my 15 seconds of fame/And come back next year with the whole fucking game/Ain’t nobody expect Kanye to end up on top/They expected that College Dropout to drop and then flop/Then maybe he stop savin’ all the good beats for himself/Rocafella’s only niggaz that help/My money was thinner than Sean Paul’s goatee hair/Now Jean Paul Gaultier cologne fill the air, here/They say he bourgie, he big-headed/Won’t you please stop talking about how my dick head is/Flow infectious, give me 10 seconds/I’ll have a buzz bigger than insects in Texas/It’s funny how wasn’t nobody interested/’Til the night I almost killed myself in Lexus! This might not be the sickest verse that he ever spit, but its up there. So if you are still one of those people that are on the fence with Kanye…JUMP OFF and come to the Darkside. The dude isn’t that bad, and you might end up like me and enjoying his music. Like always, this is your big homie King Jerm giving you some audio delight, so sit back, stir your drink, cause it’s “Last Call” and this is your installment of Song of the Week!