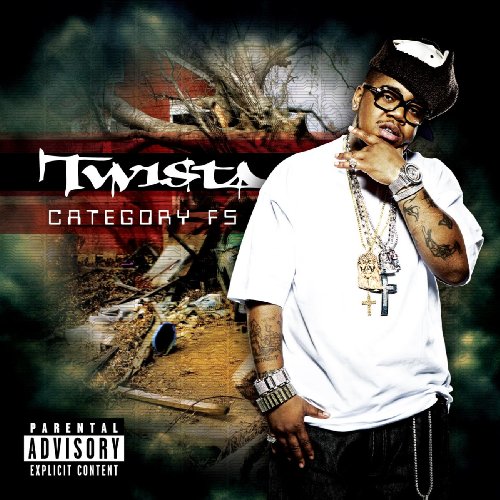 I’m not gonna lie. I’m not a Twista fan. Don’t get me wrong, he’s got skills and I don’t hate him, but it’s not like I’d stop what I was doing just bump some Twista. His verse on “Slow Jamz” with Kanye and Jamie Foxx in ’04 is what made him a lot more prolific in the game, but even before that, he was well known and was even in the Guinness Book of World Records for the title of “Fastest MC In The World”. But since then, he’s kind of slowed down a bit when it comes to commercial appeal. Let’s see what he brings to the table this time.

Misunderstood
Featuring Buk; Produced by The Legendary Traxstar
Twista quickly comes on the track to explain the album’s title, Category F5. Tornados are ranked from Category F0-F4, but rarely a large one, an F5, appears, which basically causes total destruction. After this intro, Buk raps on the track and trades verses with Twista. Twista got him, but overall the song is kind of boring and definitely too long. OK song.

American Gangsta
Produced by Toxic & John Gant
Someone might want to tell Twista that the whole “American Gangster” thing was popular back in ’07 when the Denzel movie came out, but then Jim Jones came out of nowhere and killed the whole thing. However, this song is great. I guess Twista figured if you fell asleep on the intro, he could wake you up with a banger on the second track. Nice job on this one, it’s hot!

Fire
Featuring Lil’ Boosie; Produced by The Legendary Traxstar
This song is all about rolling up and blazing. Twista’s got a nice flow on this one, and he sounds good, so does the chorus. The beat is really chill, as it should be, and Lil’ Boosie steps up on this. Not lyrically, but I heard his Phelps reference in there and I laughed. Great song.

Talk To Me
Produced by Tight Mike & Solo
This is the first dud. Twista sounds strange flowing on this one, the sample just sounds weird, and all together I’m just not feeling it. The beat is nice and soulful, but I can’t hear Twista flowing on a track like this one. It just doesn’t fit. SKIP.

Yellow Light
Featuring R. Kelly; Produced by The Legendary Traxstar
This one of those: “slow down for my girl” songs. R.Kelly’s crooning on the track is great. Twista rides slow beats exceptionally well most of the time, and this definitely no exception. Good song, not really standout worthy, but at same time it’s better than the last track and it’s a good recovery.

Walking On Ice
Featuring OJ Da Juiceman & Gucci Mane; Produced by Zaytoven
A song about ice had to feature Gucci! Despite the features, I’m not gonna trash this one (I think OJ is starting to grow on me). The beat on this is, of course, hard; What else would you expect from Zaytoven? OJ rides it well, Twista, you already know it’s a done deal. Gucci was the weakest on the track, but he still turned in a solid performance. This is the banger of the album, ladies and gentlemen. Great song.

Wetter
Featuring Erika Shevon; Produced by The Legendary Traxstar
I wonder what this one’s about?? Twista is great on the slow tracks, probably why he has so many of them on this album. Lyrically, he’s alright, but his flow is great, as usual. Erika did her thing too, her voice is perfect for this song; picking her was a good choice. Overall a good song. This was the first single off the album, I’m surprised it didn’t make much more noise on the charts.

Billionaire
Featuring Busta Rhymes; Produced by Caution and Velly
The beat on this is hot!! Twista and Busta go head to head on this one, both delivering quick, tight flows that sound great over this banger. Busta shoulda had more content like this on Back On My B.S., it would have made the album much better. Twista had the better performance, but all-in-all it’s still a great song.

Yo Body
Featuring Do Or Die & Johnny P; Produced by The Legendary Traxstar
Damn, another slow/ladies track. Is it me, or is Legendary Traxstar only dishing out the songs for the ladies? Still, this song is better than the other slow tracks, the hook is hot, Twista’s flow continues to be on point and everyone did their thing on this one. Good.

Hustla
Produced by Streetrunner & I.L.O.
Seems like this whole album has a pattern: Slow track, Banger, Slow track, Banger again and again and again. That’s not a diss, I’m happy with the results so far. Back to the song, it’s hot; Streetrunner makes great beats like these and Twista knows how to use them the right way so it all works out. Still, this song sounds just like the other bangers. Again, not bad thing (mostly), just an observation.

Gotta Get Me One
Featuring Static Major; Produced by The Legendary Traxstar
First off, I wanna say R.I.P. to Static Major because he seriously did his thing on this song. This is ANOTHER song for the ladies, but it works because it’s the best and the catchiest. In fact, if Static was still alive today, I guarantee this would be the first single off the album; it feels like “Slow Jamz II”. Twista flows nicely on this one, as usual, and this is definitely my favorite cut off the album.

On Top
Featuring Akon; Produced by Good Will & MGI
The beat is kind of weird at first because it’s got a techno vibe to it, but then the drums come in and it’s much better. Still, I’m not really feelin’ this song for a couple of reasons. One, it pales in comparison to the last song and it’s close to exactly the same formula: R&B singer + Rapper= song for the ladies. Two, Twista didn’t come correct on this one: his flow still sounds great, but at the same time lyrically he’s asleep on this one. That’s why I’m kind of leaning towards a skip.

Jump Off
Produced by Chad Beatz
Yes! This track is short but sweet. It’s a banger for sure and the hook is extremely hot! Twista lyrically sounds tired at this point, but the beat and the hook help this song to be slightly above average. Good song.

Wanna See ‘Em Buss
Featuring Liffy Stokes; Produced by Toxic
Looks like to compensate for giving us two tracks for the ladies in a row before, Twista is giving us two bangers in a row. This song is hot, Twista showed up for it but Liffy Stokes was weak. Despite that, the song is good enough…to be another average track.

Birthday
Produced by Marlin Hookman
This song actually sounds like a Swizz Beats production with the screwed hook. This song is OK, I mean it’s nothing that I would personally bump. I guess it’s an alright way to end the album, but he could have chosen a better song.

Bottom Line:
This is why I like writing for nappyafro.com; if I wasn’t, I probably wouldn’t have ever given this album the time of day. I’d probably be too busy waiting for Loso’s Way (which I personally think will flop). Still, it was a solid listen, thoroughly enjoyable. It’s got everything you need: the bangers, the songs for the ladies, the songs to blaze to, and even the soulful songs (even though it wasn’t my thing personally). Even though Twista made a great album, let’s be honest here: it won’t crack the Top 20 when B-Easy hits us with the numbers for the week. That is, unless ya’ll go out and cop the album!! Trust me, you won’t be dissapointed.