Nobody Famous – Order Up! Volume 3: Chicken and Waffles 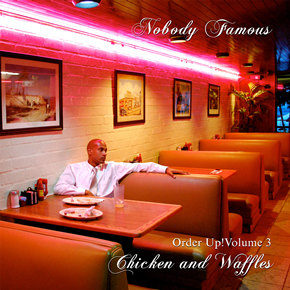 You know how you guys are always complaining about how there is no “real” music anymore? Well thanks to the homie Kevin Nottingham and Nobody Famous, you can stop the bellyaching for now. Coming in a time where there is so much to take in, some people get lost in the shuffle. Don’t let that happen to this guy. I’m not saying this because he is a friend of ours, I’m saying this because “real” Hip-Hop is becoming a forgotten art. The youngsters of today are so out of touch with “real” music and need to be reminded from time to time. The album was produced solely by Nobody Famous and was released digitally TODAY on HipNOTT Records. The concept behind the album was to give listeners some good music that they could come back to, and feel satisfied like they do when they eat a good meal. Side Note: if you never have tried chicken and waffles…YOU ARE SLEEPING! You know we don’t just hand out “co-signs” like some of these sites, so if we are behind it…IT’S OFFICIAL. Don’t take my word for it, find out for yourself.

LISTEN TO THE FULL ALBUM @ IMEEM

Amazon Buy Link for Order Up! Volume 3: Chicken and Waffles

Itunes Buy Link for Order Up! Volume 3: Chicken and Waffles