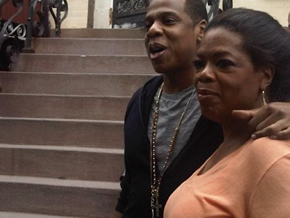 Jay-Z needs to go ahead and follow his heart and divorce Beyonce. Yep, he needs to go after the woman that no man has been able to bag…OPRAH. Think about it, if Jay bags Oprah that would make him the LIVEST dude EVER! Oprah and her Billions are better than Beyonce and her Millions. Oprah needs some HOOD credibility and Jay is crossing 40 this year and he needs to get in that market. People wondered how Jay could top getting the “hottest chick in the game wearing his chain” now he can get one the “wealthiest chick in the world being his girl”. Look at how comfy they looked in the pictures when they were in Marcy. I bet you Jay has NEVER taken Bey to Marcy. Jay looks like the type that would want to be with an older woman anyway. I don’t think Beyonce holds deep conversations with him if you catch my drift. He was walking around holding Oprah’s hand, smiling, they looked like a real comfortable. Unlike the awkwardness of his marriage, they actually LOOKED like a couple. Also, Beyonce has taken Jay as far as she can. If he gets with O…the possibilities are endless. Oprah has deep pockets and her followers are deeply loyal. Jay could actually get that label started that he has and he get those 40/40’s back up and running. So watch when Jay makes his appearance on the Oprah Show or O Magazine (good look on Jay’s part), look to see if he starts flirting. Oprah wants to unleash her inner COUGAR and Jay is ripe for the taking.

Beyonce, you better watch out…Oprah is taking your man!