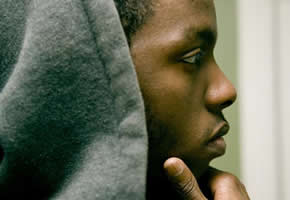 Here at The Fro, we’ve been on our indie artists and underground/under-hyped Hip-Hop shit this year. One of these artists is D.Swain aka Danny!. He won my coveted “Turn Yo Headphones Up” award for 2008 for his 4th album. Still, most of you are the uninitiated. His 5th album is coming out at the end of this month and we plan to do it real big for that one so stay tuned. If I had to describe his sound, I’d say refreshing. He doesn’t kill anyone, or rap about money cars and hoes….well, there are songs about women, but not the same ones that you hear talked about in most songs. Danny! is a regular dude with exceptional talent. He doesn’t put on airs or try to seduce you into some fantasy world where he is driving a car with as many numbers in the price as there are letters in the name. Simply, put, he’s good Hip-Hop. This week’s SOTW is from the aforementioned Where’s Danny? that will feature Che Grand and Drake as well. Until then, enjoy this offering fam.

embed link for divshare player on page in article –