Music Inspired By More Than A Game [Review] 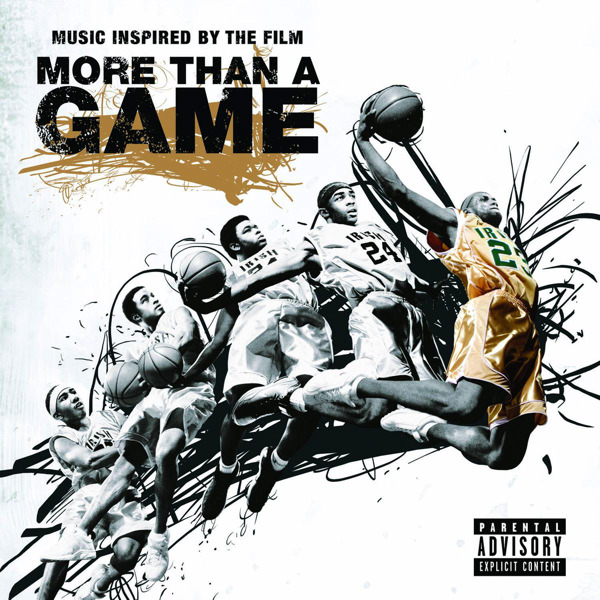 More Than A Game tells the story of now NBA superstar LeBron James and his fellow teammates during their high school years at St. Vincent-St. Mary High School in Akron, Ohio. It follows the team’s journey of trials and tribulations to the eventual success of a high school basketball national title in 2003. With every documentary that depicts the story on film, there’s an equal telling of that story through music. 8 Mile had it with Music From And Inspired By The Motion Picture 8 Mile, Get Rich Or Die Tryin’ had it with Music From And Inspired By The Motion Picture Get Rich Or Die Tryin’, so it would only make since for a film as strong as More Than A Game to have one. The purpose of a film’s soundtrack should be to present the essential elements of the film and essential tell the story of the film without watching the actual movie. The soundtrack should make the listener feel as though they have seen and experienced the movie through listening. Both soundtracks to 8 Mile and Get Rich Or Die Tryin’ do a great job of this (the former more than the latter) and if listeners are hesitant to seeing More Than A Game with the fear of it being more Crossover and Like Mike and less The Basketball Diaries and Hoop Dreams, hopefully listening to this soundtrack will sway their decision.

1. Drop It Low
Ester Dean featuring Chris Brown; Produced by Polow Da Don
As the first track you hear on the album, you immediately get a bad feeling about listening to the rest. From the title of the song you could already get a feeling as to what this song is about and how it would sound. Featuring typical production from Polow Da Don, Ester Dean sings about dropping her booty low (original huh??) and a return of Chris Brown to the music scene after his incident with Rihanna. Given the story of the movie and how it looks to be, I don’t really see at all how this song relates or got included other than a commercial single for the young crowd to dance to.

2. Forever
Drake featuring Kanye West, Lil Wayne & Eminem; Produced by Boi-1da
A song that everybody should be well familiar with by now as it’s an official single for the album with an accompanying music video released last week. Boi-1da continues with his current streak in providing some bouncy production for all four emcees to deliver everything from average to stellar verses on. While Drake, Wayne, Ye drop good verses, the show is obviously stolen by Mr. Mathers who obliterates his verse with fantastic wordplay, precise delivery, and even flow switching to top it off. This was a quality selection to be included on this album.

3. King On Set
T.I. featuring Young Dro; Produced by The Smash Factory
A song from the self-proclaimed King of the South before his current jail stint that features fellow Grand Hustle member Young Dro dropping rhymes atop production from The Smash Factory that fit well the aforementioned rappers. A song that sounds like it could have fit on T.I.’s King album, features T.I. donning his fast flow while Dro take his time in defining the word “king” and how it applies to him. This track obviously fits LeBron more in present times with his “King James” moniker more than it did during his high school days.

4. Stronger
Mary J. Blige; Produced by Polow Da Don & Hit Boy
This time around Polow Da Don delivers much more meaningful production along with Hit Boy as they supply a beat for Mary J. Blige to deliver in classic MJB style. As one of the album’s official singles, this song perfectly fits with the theme of the movie of individuals standing together as one to over come struggles and hardships. This song truly gives you the feeling of the movie without having seen the preview beforehand.

5. History
Jay-Z; Produced by Kanye West & Kenoe
This song was previously released back in November ’08 around the time of Barack Obama’s election as President of the United States in which Jay-Z performed at the President’s Inaugural Ball. In regards to that event this song fittingly serves as Jay cleverly refers to “history” as his child after searching and finding his wife “victory”. Kanye and Kenoe provide a historic sounding backdrop for Jay to deliver inspirational verses on a song that fits well with the historic legacy left by LeBron and his teammates at SMSV.

6. Top Of The World
Rich Boy featuring Chili Chil; Produced by Rich Boy
After a few inspirational tracks, Rich Boy brings the energy back to the album with this self-produced track. Rich Boy’s beat is the trademark hard thumping southern production that suits him so well, as he delivers lyrics letting listeners know why he’s one of the young rappers in the game moving towards the top and why his gold selling debut album Rich Boy was no fluke. Chili Chil provides the hook on this track that makes the song complete and gives you a feeling of the fight and push within Lebron and his teammates during their quest of a national title.

7. I’m Ballin’
Soulja Boy Tell ‘Em; Produced by Hamsquad
Upon reading the song title and featured artist you should already know what to expect from this track. With production from Hamsquad that fits Soulja Boy Tell ‘Em’s typical style, he proceeds to drop lyrics concerning his economic status as the song title implies. Nothing really special with this track other than the fact that Soulja Boy and Gucci Mane are starting to sound like the same person on tracks with the identical flow/style, subpar lyrics, and limited content matter. Once again other than commercial purposes, I don’t really see why this track was included on this soundtrack, and it’s status serves more towards LeBron in his current status more than how he was during his high school days before endorsements and contracts.

8. We Ready
Ya Boy; Produced by Harvey Mason, Jr.
After the previous lacking track, this track brings things back up for the soundtrack featuring Ya Boy dropping lyrics in regards to being ready for the challenge and task at hand, which for LeBron and his teammates was obviously winning the national title. The production from Harvey Mason, Jr., who executive produces the soundtrack and produced the film, is done in fitting battlefield style that connects well with the song’s topic and the lyrics delivered.

9. Go Hard
Hayes; Produced by Jerome Harmon
Continuing with the theme of persistence and determination, Hayes delivers a track in motivational style about pushing on and not stopping when met with opposition. The track’s production from Jerome Harmon, who also contributed to “Venus vs. Mars” on Jay-Z’s The Blueprint 3, is a synth filled, organ driven beat that pushes and supplements Hayes’ lyrics and subject matter to a higher level.

10. Frozen
Jared Evans; Produced by Jared Evans
This track features artist Jared Evans both behind the mic and behind the boards as he delivers lyrics over subtle production about being stuck or “frozen” in a place of misfortune and adversity while trying to make it through. The track connects on a level with the movie and how the team must have felt when things just weren’t going as they expected or wanted them to.

11. If You Dream
Tank featuring Tyrese, Toni Braxton, Jordin Sparks, Omarion, Faith Evans, JoJo, Charlie Wilson, Tamar Braxton & Steve Russell; Produced by Harvey Mason, Jr., Durrell ‘Tank’ Babbs & J. Valentine
A truly inspirational song in terms of song topic/title, lyrics, and production, featuring an all-star casts of R&B/Soul artists to bring the album to a close. The piano driven production on this song perfectly match the topic of never quitting and giving up on your dreams to accomplish your goals in the end. This song is probably the best match on the album in terms of capturing the movie’s story and plot in a single song, and it does a great job in delivering that aspect. This song alone should make any listener eager to go see More Than A Game in theaters.

Bottom Line:
In terms of doing what a soundtrack is supposed to do in complimenting the film, Music Inspired By More Than A Game does that efficiently. While there were a couple tracks (“Drop It Low”, “I’m Ballin’”) that felt out of place and didn’t really relate to the film’s story, a good number (“If You Dream”, “Stronger”, “History”) of them conveyed that story with great results. Listening to this album gives you a feel and understanding of the trials and tribulations that LeBron and his teammates had to deal with on their way to the top in being the best high school basketball team in the nation in 2003. Those that continually hate on LeBron James as an accomplished NBA basketball player can truly see the passion, hard work, and dedication to the thing he loved most in the game of basketball and hopefully get a better understanding of everything that he overcame in the process to becoming one of the best rising stars in NBA history from his high school journey. The often sports related quote “there’s no I in team” is best exemplified with the More Than A Game documentary as it shows as a team they could take on the world and accomplish that which couldn’t be achieved individually. How basketball movies like Hoop Dreams, Sunset Park, Coach Carter, and The Heart Of The Game served as inspiration for those with dreams of one day making it to a career the NBA, More Than A Game continues that tradition for kids all over with posters of LeBron, Kobe, and Wade over their walls. Get to theaters and see More Than A Game as well as picking up this soundtrack even if your aspirations lay elsewhere other than basketball. This is a documentary and soundtrack that provides inspiration and motivation to dreams of all kinds.