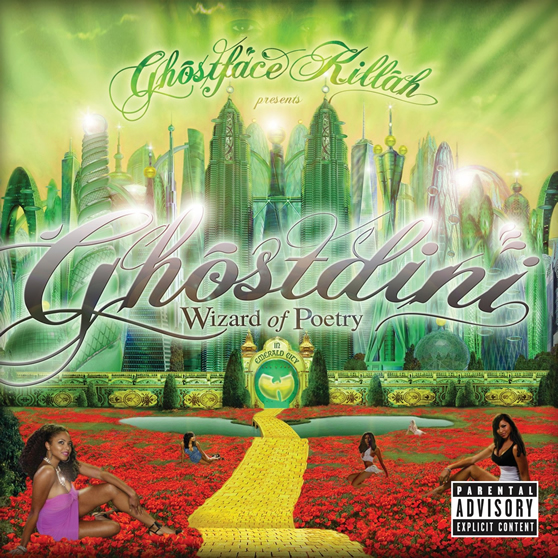 Ghostface Killah doing an R&B theme/inspired album really shouldn’t surprise anybody. Songs like “All That I Got Is You”, “Never Be The Same Again”, “Beauty Jackson”, & “Back Like That” already proved that when it comes to the subject of the love or the opposite sex, Tony Starks provides introspective tales like only he can. But the question still is; Can he keep this up from a whole album? Well see as Ghostface presents his 8th solo album Ghostdini: The Wizard of Poetry in Emerald City.

1. Not Your Average Girl
Featuring Shareefa; Produced by Scram Jones
The R&B sound of the album starts of strong; at first listen it sounds like Shareefa featuring Ghostface. But Ghost still get in three verses about the type of girl that can roll with him: “Nice girl that’s clean that was raised to cook/She on the couch chillin’/Shorts on reading a book”. Yeah, it’s not the most original but it works here. The Scram Jones production is reminiscent of something I would have heard from Bad Boy during the late 90’s (It also uses a sample I can’t place that was also used on L.E.G.A.C.Y.’s “TKO”). Not a bad start.

2. Do Over
Featuring Raheem DeVaughn; Produced by Mahogany
This track has Ghost in apology mode to his woman (And it’s not because he left the toilet seat up either): “She broke down and cried and it hurt so bad/Her friends went and told her I was a brand new dad”. In a sense, this really reminds you of songs like Jay-Z’s “Song Cry” (This is also true the sample used in the production). Raheem DeVaughn kills the hook and really helps make this a stand out track. In my opinion, this song definitely should have been the first single. My favorite off the album.

3. Baby
Featuring Raheem DeVaughn; Produced Austin “Watts” Garrick & Rashad Smith
This was the first single off the album and is almost the flipside of the previous song. Here Ghostface professes his love for the girl holding his seed. He does a good job here of easily talking about this subject and not coming off corny even rapping from his lady’s perspective: “Just that the babies kicking/I want some Popeyes chicken/And my back kinda hurt for the way I was sitting/Hurry home so you rub my big belly and kiss it”. DeVaughn returns to do the hook but this time he brings the Auto-Tune. I would have preferred he didn’t because I think the track would have been better. All in all the song still get it’s point across. Check out the corresponding video that works too.

4. Lonely
Featuring Jack Night; Produced by Sean C & LV
If you are going through a bad breakup, you probably should skip this track. Over a melancholy beat Tony Starks sounds pitiful and heartbroken here about another man shacking up with his ex-old lady in his old crib; “Under my covers and changing my channels/Playing my CDs in my robes another man is burning my candles” Dang. If that isn’t enough, the chorus by Jack Night adds to the pity party; “Don’t be surprise if you see my round town/Walking around with my head hug down/I’m so lonely”. The feeling is projected and a story is told. Good job.

5. Stapleton Sex
Produced by Sean C & LV
“You can put my dick in your mouth and play with my nuts/But before I bust baby I think I’ll cum in your butt” Whoa. Those were the first lines in the song and it drastically changes up from the theme of the album so far. It’s a raunchy fest of Ghost and girl talking explicit sex. It’s a reason this can’t be found on the edited version of Ghostdini. But hey, I’m the guy would made DJ Quik’s “Sweet Black Pussy” Song of the Week once. I like this kinda music when it’s done well and at 2:33, this is just enough before it get repetitive and uncomfortable. Check out NSFW music video here.

6. Stay
Produced by Skymark
Things get back to smooth talking with this one as Ghostface tries to convince a woman to “Stay” a little longer and not go back home to here man. I say smooth talking cause Ghost mentions everything from baby oil, feet kissing, and even a Dreamgirls DVD to sway homegirl that he’s a better choice. Over a fitting soul sample, Ghostface keeps on subject and makes this a standout track.

7. Paragraphes Of Love
Featuring Vaughn Anthony & Estelle; Produced by Bei Maejor & Tim Bosky
Here, Tony Starks raps about a chance encounter with a woman that caught his eye (Played by Estelle) and how she may be the one but both are in relationships. Now, this could have been a cookie cutter rap scenario song that we’ve heard before, but it’s the little things that make this more. It documents just a brief moment and it adds details and swerves like how the girl is pregnant and such. The production adds to the build up and both Estelle and Vaughn Anthony dueling on the hook bring it out more.

8. Guest House
Featuring Fabolous; Produced by J.U.S.T.I.C.E. League
If you’ve listened to Deeper Than Rap or even frequent this site, you may recognize this beat from Rick Ross’ “Yacht Club” (Both produced by J.U.S.T.I.C.E. League). But that’s where the similarity ends. Ghost is up to his usual attention-grabbing storytelling and weaves a tale about looking for his shorty and finding here creeping with …Fabolous. And this is what helps the song. The way Fab is placed is not just to have him on the song, his plays a role just as if he was an actor in a movie. This song is good because it make you anticipate how it’s going to end. Well done.

9. Let’s Stop Playin’
Featuring John Legend; Produced by Sean C & LV
As soon as the Marvin Gaye sample comes on, the song sounds as if it was fitted for John Legend. And while on paper it seems this would work, for some reason I couldn’t get into it (Honestly, it could be because I’m tiring of John Legend). Ghost is telling a girl that both needs to through off the games and succumb to their attractions; “I been wanting you for mad years/When the elevator broke I run and help with you bags upstair/I was scoping you out…” It’s an average track.

10. Forever
Produced by Clyde & Harry
Ghostface ditches the R&B singer on this track and goes for self on the hook. This itself track treads on the same vein as “Baby” but deals more with the relationship aspects. He even deals with (*gasps*) “that time of the month”; “Especially when she’s on her friend/I be hoping it leave/Biting my tongue/Just to keep for arguing” The beat loops a sample of a lady singing “foever” and it fits. This is an album cut; not filler but something that just does its job and is not single material.

11. I’ll Be That
Featuring Adrienne Bailon; Produced by L.T. Moe
Uh, I guess you can’t like everything. Ex-Cheetah Girl Adrienne Bailon rides shotgun with Tony Starks to questionable results. I swore, with this bubble gum production, I was expecting Ja Rule to jump out and start crooning. It’s not the worst song ever, but it doesn’t hold up or fit with the other tracks. Skip.

12. Goner
Featuring Lloyd; Produced by Sean C & LV
Here is a track that I saw and wasn’t feeling the collaboration. I was wrong. This is an additional one that I think should have been a single. It has Ghostface hollering at a girl from way back who has blossomed in his absence. He doesn’t loose himself being paired with Lloyd though (“I pull out like a tooth when  the back is rotten”); both hold they’re own here. The real star here may be the production though. It’s really high quality and the guitar playing is well done.

13. She’s A Killah
Featuring Ron Browz; Produced Anthony Acid
I saw the video where Ghostface says that because of this song’s heavy use of Auto-Tune, Jay-Z’s “D.O.A.” killed it from being a hit. Thank god! This shit sucks. It a bonus track but…SKIP!

14. Back Like That (remix)
Featuring Kanye West & Ne-Yo; Produced by Xtreme
I was scratching my head that this song was included here since this song is at least three years old (And was already included on Ghostface’s More Fish). Well, it fits the theme of the album; I guess it works for a bonus track.

Bottom Line:
I don’t think many rappers with Ghostface’s hardcore music background could do an entire album with an R&B theme of love, sex, and heartache. It’s still a Ghostface Killah album and it doesn’t come off as sappy of forced. It’s definitely on some grown man shit. If there every was a Wu-Tang album that you could listen to in the car with your girl, it’s this one (Okay, you may need to skip track 5…then again, maybe not). While there are some slip ups, you would still have to mark Ghostdini: The Wizard Of Poetry In Emerald City off as another good album for Tony Starks and one that is fun to listen to.