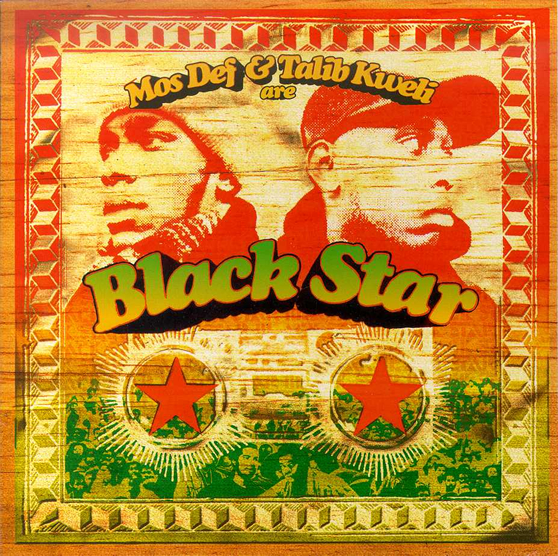 In looking at the past Classic Material entries I was very surprised to see that this album wasn’t included in the listing. An album that did more for Hip-Hop’s reconstruction on the eve of the deaths of 2Pac and The Notorious B.I.G. in the late 1990’s that most people don’t give it credit for. An album that displayed lyrically there was much more than clichéd themes of violence, guns, and misogyny in providing uplifting messages of empowerment and self-awareness and address critical issues that were being overlooked. The album that I’m speaking of delivered by two of Hip-Hop’s most acclaimed lyricists is entitled Mos Def & Talib Kweli Are Black Star. The collective duo of New York emcees Mos Def and Talib Kweli known as Black Star stood as one of the better Hip-Hop tandems in 1998 that presented a new sound and an alternative for listeners who were growing tired of the common themes being presented by other Hip-Hop artists. In a year filled with larger than life releases from the likes of Jay-Z (Vol. 2… Hard Knock Life), Lauryn Hill (The Miseducation Of Lauryn Hill), Gang Starr (Moment Of Truth), Outkast (Aquemini), DMX (It’s Dark And Hell Is Hot), Big Punisher (Capital Punishment), etc., Mos Def & Talib Kweli Are Black Star held it’s own as a relative unknown against the heavyweights.

As previously stated, I had to come without doubt that this album satisfied every true Hip-Hop head’s anticipation as it is filled with true lyricism and backed by wonderfully composed productions from various producers like Da Beatminerz, 88-Keys, J. Rawls, and Hi-Tek (who handled a majority of the album’s production duties). Those that were wary of Black Star, who were relatively newcomers on the scene courtesy of Rawkus Records, and hesitant in giving the album a listen would be immediately convinced. The first five tracks (“Intro” excluded) display the lyrical skills and abilities of Mos Def and Talib Kweli in a light that was fairly unheard of at the given time. “Astronomy (8th Light)” cleverly sees the duo putting the word “black” to use in describing the true meaning of Black Star and its various elements and inspirations. “Definition” gives an accurate definition of the current times of Hip-Hop in 1998 (“1,2,3, it’s kind of dangerous to an emcee/They shot 2Pac and Biggie/Too much violence in Hip-Hop”) and a scene of where it would be headed with emcees like Mos and Kweli on the horizon.

While “Definition” featured some up-tempo production from Hi-Tek, the subsequent “Re: Definition” delivers a slowed, menacing beat that hears them further explaining their definition of Hip-Hop music while putting a slight twist on the subject matter. While Snoop had provided a classic modern spin to Slick Rick’s timeless “La Di Da Di” (The Great Adventures Of Slick Rick) five years earlier on “Lodi Dodi” from his seminal Doggystyle album, Mos went solo on his rendition of Slick’s “Children’s Story”. Doing an excellent job in modernizing the 1988 classic to how the scenario might have played out some 10 years later, Mos portrays himself as a complete emcee in putting his storytelling skills on display. Not many Hip-Hop songs at the time featured the type of laid-back, jazzy production as heard on “Brown Skin Lady”, as well as the lyrics that were presented in being those that showed reverence and respect towards African-American women instead of the degrading and demeaning lyrics that were commonly heard.

The rest of the album follows the same suite in delivering enduring tracks that were ahead of their time for being presented in 1998. From the smooth, uplifting “K.O.S. (Determination)” and “Thieves In The Night” to the spoken word delivered “Yo Yeah” to the lyrical wizardry with Common heard on “Respiration” and Jane Doe (b/k/a Jean Grae), Wordsworth, and Punchline on “Twice Inna Lifetime”. While other albums released in 1998 possessed the star power from recognized names and previous releases, Mos Def & Talib Kweli Are Black Star contain just as much quality if not more than those held listeners’ attention. During a time when the Hip-Hop scene was on the brink of collapsing after the demise of two of its biggest stars in 2Pac and The Notorious B.I.G., artists all over were working hard to keep the genre afloat and moving forward. After the deaths of two premier emcees, many within the Hip-Hop community were searching for answers to the declining state while struggling to move towards a different path for the future, away from the negative and damaging effects and music that surrounded their deaths. Mos Def and Talib Kweli, along with artists like The Fugees, Jurassic 5, Company Flow, Arrested Development, and others provided the soundtrack and foundation to that movement (Alternative Hip-Hop) that would have more impact on Hip-Hop’s future than its immediate present in 1998. This album paved the road for future artists (J-Live, Immortal Technique, Little Brother, Lupe Fiasco, Lyrics Born etc.) and albums to be widely accepted and acknowledged as being an alternative option to the common themes and trends in Hip-Hop music and culture.