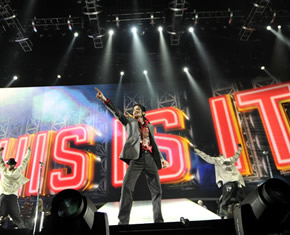 Another Numbers Game, another day I apologize once again for the lack of reviews. But hey, Michael Jackson is back on top of the charts; that’s something right? Sidenote: We (nappyafro) are gonna get back on our review grizzly. Believe that.

Anywho, the soundtrack to Michael Jackson‘s highly successful movie This Is It hits the charts hard and get the #1 spot. It sold about 370,000 albums (Which is crazy). Even in death the King Of Pop is a force to be reckoned with. He even had another album/compilation (Selections From Michael Jackson) debut on the charts this week at #91. Respect.

Brian McKnight comes in at #20 with his 9th album Evolution Of A Man. He did okay and pushed 24,000 units. Even though I knownothing of this album, I can’t hate on the man though; I once went to a Brian McKnight concert.

Triple C’s prove the naysayers wrong and moves over the speculated sales figures predicted by 50 Cent. Custom Cycles & Cars lands and #44 sales 12,000 albums. Not to good? Better than the 4,000 Curtis thought they did.

Shout out to the comments section. We missed the review for Swollen Members. It’s happens (Even though I like Swollen Members the group). Their new album Armed To The Teeth comes in at #146.

I could have sworn Z-Ro‘s Cocaine was a mixtape. An official mixtape? It comes in at #147.

“Running on fumes but getting the team together.” –  Typo King.