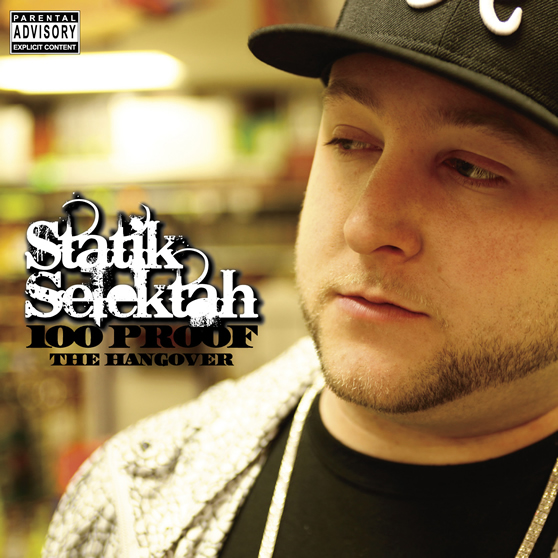 Anybody that knows my preferred preference when it comes to the genre of Hip-Hop/Rap music knows I care more for the underground scene than the mainstream/commercial that dominates radio and television. Underground Hip-Hop/Rap has always had a special place in my heart, maybe for the fact that many of the artists and music are relatively unknown to the masses and you get a good feeling have known about said artist before they reach that higher level in their career or possibly because most of the songs are just of better quality in terms of production and lyricism, and still hold the culture and art above the money and fame. I believe the latter reason holds to for an artist like Statik Selektah who obviously still views Hip-Hop/Rap as an art as evident in his music, which preserve an authentic feel of “real Hip-Hop” that is seemingly missing in most of the music the genre’s most celebrated artists. 100 Proof (The Hangover) serves as Statik Selektah’s 3rd studio album with Spell My Name Right (The Album) (2007) and Stick 2 The Script (2008) preceding it. Statik Selektah is a proclaimed student of the game, having taken influence from the likes of DJ Premier and Pete Rock as heard in his production, and he usually uses his albums as a chance to pair artists together with tailor-made beats. Statik’s first two offerings have been those of superb quality in comparison to albums from his peers in the industry. In a time where quality Hip-Hop/Rap is needed more than ever, does Statik deliver on this strength of his alcohol-based album title…

Inside A Change (Intro)
Produced by Statik Selektah
The “Intro” whose song title borrows from the 2009 Rik Cordero indie film Inside A Change, serves to interpret the album title 100 Proof (The Hanger) as the narrator talks about human relationships as being either toxic or nourishing similar to the effects of alcohol (depending on choice). Along with some dramatic production value, Statik uses this track to put the listener in the proper mindset for the rest of the album.

So Close, So Far
Featuring Bun B, Wale, & Colin Munroe; Produced by Statik Selektah
Things start off on the right foot with a motivational track built off some mellow, jazzy production from Statik Selektah as Bun B and Wale deliver lyrics focused on better days and how they can seem close within reach but still far from realization. Vocals from Colin Munroe prove to be fitting for both the mood and message of the song.

Critically Acclaimed
Featuring Lil’ Fame, Saigon, & Sean Price; Produced by Statik Selektah
Just as things seem to be mellow and calm Statik turns up the heat with this track, which proves to be a certified head-nodder. The hard-hitting drums combined with the energetic sample provide the perfect backdrop for featured guest Lil Fame, Saigon, and Sean Price to drop lyrical bombs on as each emcee spits with something to prove.

Night People
Featuring Freeway, Red Cafe, & Masspike Miles; Produced by Statik Selektah
For a producer as diverse as Statik Selektah, matching artists with production comes easy as he creates a soulful composition for Freeway and Red Cafe to drop bars over. Philadelphia Freeway comes correct as usual (Stimulus Package coming soon) as he sounds very comfortable on Statik’s production with Red Cafe dropping a quick verse of equal quality. The hook sung by Masspike Miles completes the song and gives it a feel that could easily be heard on the airwaves (If radio was brave enough to play a song like this… Thanks Sirius/XM).

Follow Me
Featuring Smif N Wessun; Produced by Statik Selektah
Things take a turn with this track as the mood of the album get dark and sinister from fitting production as Statik combines pulsing synths, strings, and piano keys for a horror-styled beat. Smif-N-Wessun proceed to deliver rhymes that are suitable but far from memorable, which can be said about this track overall. The production on this track is average for a producer with the track record of Statik Selektah, and comes of sounding like something you could’ve heard from AraabMuzik for Cam’ron on Crime Pays or the Diplomats post-Diplomatic Immunity.

Do It 2 Death
Featuring Lil’ Fame, Havoc, & Kool G Rap; Produced by Statik Selektah
Statik picks things back up following a misstep with the previous track as Lil’ Fame returns with Havoc and Kool G Rap joining the list of guests for some authentic street rap. The production from Statik is fitting on this track all three emcees deliver fitting rhymes that serve their purpose. Not too much to say about this track other than it being a solid offering.

Come Around
Featuring Termanology & Royce Da 5’9”; Produced by Statik Selektah
When I heard this track on Shade 45 and heard it was off Statik’s new album my interest and anticipation grew even more. Getting back to the laid-back, smooth production that was heard in earlier tracks, Statik delivers a fantastic beat for Termanology and Royce Da 5’9” to let loose on. Fellow Boston representative Termanology delivers a respectable verse, but it’s Royce who steals the show with his metaphor-driven verse backed by a superb flow.

Drunken Nights
Featuring Reks, Joe Scudda & J.F.K.; Produced by Statik Selektah
Statik proceeds to slow things back down with this track themed about nights spent with a bottle as the closest companion. Statik keeps things smooth with a jazz-styled beat that fits nicely with the rhymes from guests Reks, Joe Scudda, and J.F.K. Much like “Do It 2 Death” this track ends up being another solid offering on the album, not really standing out much from it’s purpose.

Life Is Short
Featuring Consequence; Produced by Statik Selektah
On this track Statik picks up the pace and hooks up with G.O.O.D. Music’s Consequence for a song detailing how life is too short to not enjoy it while you can. Cons uses his verses to tell about his own life indulgences and why you won’t catch him letting life pass him by. This is a good track that brings some life back to the album after the slow-paced previous track.

100 Proof (Interlude)
Featuring J.F.K.; Produced by Statik Selektah
Ten tracks into the album, this track serves as the halfway mark with J.F.K. speaking some words of wisdom over some vintage Statik Selektah production. This track reminds me of something that could have been heard from DJ Premier on Group Home’s Livin’ Proof album.

The Thrill Is Gone
Featuring Styles P & Talib Kweli; Produced by Statik Selektah
Getting back to the program we hear what I think is the best song on the album as Statik provides some trademark production in which we hear Styles P and Talib Kweli drops gems about the industry’s ills and problems of the world. The pairing of Styles and Kweli wouldn’t seem typical but it works quite well on this track. The scratched Biggie vocals on the chorus serve as a nice completion to this album’s highlight track.

Get Out
Featuring Skyzoo, Rapper Pooh, Torae, & Lee Wilson; Produced by Statik Selektah
This track features some basic production from Statik as well as some of rap’s most potent lyricists in Skyzoo, Rapper Pooh, and Torae as they speak about their journey away from the street life to something better. While Rapper Pooh and Torae drop good verses, Skyzoo displays exactly why he’s one of the nicest up-and-coming rappers to be on the watch for. Lee Wilson provides a suitable hook on the job that does its job.

Laughin
Featuring Souls Of Mischief; Produced by Statik Selektah
Statik gets back into his regular form on this track with some lively sampled production suited for 90’s-famed rap group Souls Of Mischief who don’t sound like they have lost a step since their “93 Til Infinity” days. This track sounds like one that would have been perfect to start off the album but fits nicely here as a refresher for the listener with SOM droppin’ some well-placed verses.

The Coast
Featuring Evidence, Fashawn, & Kali; Produced by Statik Selektah
Even though Statik Selektah represents the East Coast as a native of Boston, he hasn’t forgot about his brethren on the West Coast that are holding it down for Hip-Hop. Statik provides some nice, subtle production as Cali veteran Evidence and Left Coast rookie Fashawn along with Kali properly represent their home state.

Fake Love (Yes Men)
Featuring Reks, Kali, Termanology, & Good Brotha; Produced by Statik Selektah
This is the kind of track that’s so necessary right now for the Hip-Hop industry and should serve as a guide for a new rappers trying to get in the game or building a name. Backed by some mellow production from Statik, the featured artists speak on one of the most dangerous factors to an artist in “yes men” who agree to whatever and are foreign to constructive criticism. Next to industry rule #1080, should be this song for artists to take notice of for their careers.

Eighty-Two
Featuring Termanology; Produced by Statik Selektah
Fittingly this track serves as an acknowledgment to Statik Selektah and Termanology’s born year, which sees Term rapping about his growth as a youth to his current status as well as the things he had to go through to reach said point. Statik keeps the mood consistent with from the previously tracks with more smooth production that keeps your head nodding before you realize how short the track is.

Walking Away
Featuring Kali & Novel; Produced by Statik Selektah
Statik decides to finish off the album with a more serious themed track backed by some piano driven production that hears Novel and Kali speaking about several issues that they’re facing in life and knowing when it’s time to walk away from those issues in hopes of a better situation. I think this is a good way to end the album as it gives a sense of closure and completion for the listener and all that has been heard.

Bottom Line:
Keeping the same formula that brought him successful results on his first two albums Spell My Name Right (The Album) and Stick 2 The Script, Statik Selektah produces another quality album that showcases his ever improving production skills and knack for matching it with the right artists. Listeners who are in the crowd of those that prefer lyricism and production value over club hits and dance tracks are who this album is for and it shows as Statik isn’t trying to make it to #1 on 106 & Park or have the hottest song in the club. Statik is a producer/DJ that recognizes and acknowledges the music that influenced him and is focused on making the same kind of the music that will hopefully influence other young listener the same that listen to his music. Once relatively unknown for his producer role and more on the mixtape circuit as a DJ, Statik Selektah is quickly evolving into one of the top producers in the game equipped with the skill and talent of diverse productions to match a plethora of rappers. As long as Statik continues to produce quality albums, I don’t see a need for him to change the formula that has worked three consecutive times in his favor.