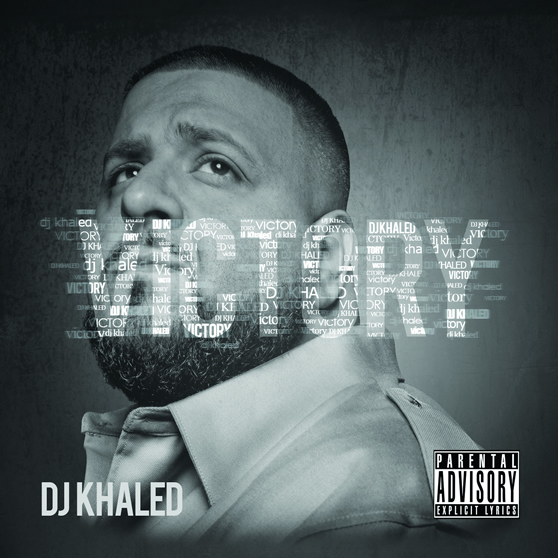 DJ Khaled has let it be known who he was and what he was trying to push from the gates. “We The Best”, “Listen”, “We Global”, “I’m So Hood”, along with other phrases. One thing you can say about Khaled is this, he puts on for his city and the whole South. Who else can get Jeezy, T.I., Luda, Rick Ross, and Weezy on a track at one time with no problems? This is Khaled’s fourth studio album, with each album being better with release. I wonder what kind of strings Khaled will pull this time to claim that Victory.

Intro
Featuring Diddy & Busta Rhymes; Produced by Leroy Romans
Khaled doing a dialogue for the intro to his album. If you are one of the people that hate on this man for whatever reason, you might want to skip this.

All I We Do is Win
Featuring Ludacris, T-Pain, Rick Ross, & Snoop Dogg; Produced by DJ Nasty & L.V.M.
The first song off the album sets the album off. T-Pain doing what he does best…hooks and Luda proving that he is at the top of his game and it’s time for people to take notice. My boy Ross comes through and SMASHED his verse. Snoop also recited a verse pretty well. WAY TO START THE ALBUM OFF!

Put Your Hands Up
Featuring Young Jeezy, Rick Ross, Plies, & Schife; Produced by Schife & OhZee
Now this one for my GOONS! I think I busted an audible nut when I saw this. Plies, Jeezy, and Ross? WHAT? This song right here…FLAME! Ross is really on his shit right now. This song didn’t disappoint at all. BANGER!

Fed Up
Featuring Usher, Young Jeezy, Rick Ross, Lil’ Wayne, & Drake; Produced by The Runners
The first single off the album, and how could you go wrong with that line up? This song HAS to be a hit. Look at the features. Do I really have to say this song is HOT? You should already know. But what stood out was Usher’s verse at the end. Check it out for yourself.

Victory
Featuring Nas & John Legend; Produced by The Inkredibles
John Legend knows how to make a song, and God’s Son comes through spitting some of that stuff that made you remember why he is one of the top MC’s ever. DAMN. I guess being behind in child support will make you spit some dope shit.

Ball
Featuring Jim Jones & Schife; Produced by Schife & OhZee
Certain beats work for Jimmy; this is one of those beats. Niggas hate on Jim (B-Easy) but Capo does the same thing that Gucci does, so why can’t he get any props? BUMP THIS SHIT! “I got these bitches dunking dicks like Sheryl Swoopes, when they see me pull up to the spot in several coupes.” JIMMY!!

Rockin’ All My Chains On
Featuring Birdman, Bun B, Soulja Boy Tell Em’, & Schife; Produced by Schife & Drumma Boy
I have to tell you that this production on this album has been DOPE! This beat here…FLAME! Bun B jumps on the beat and did his usual damage. I really think the beat overshadowed all the artists on the track. But the song is worth listening to either way.

Killing Me
Featuring Bounty Killer, Buju Banton, & Busta Rhymes; Produced by The Runners
Busta got in touch with his inner Jamaican and got with some Dancehall icons, Buju Baton and Bounty Killer, to make this club banger. I can see some women dancing seductively to this.

Bringing Real Rap Back
Featuring Rum; Produced by The Runners
DJ’s have a way to sneak their new artists on albums like this. This dude sounds real raw, on some Plies shit, but a little more realer. I’m interested into hearing more from this dude.

Bring The Money Out
Featuring Nelly, Lil’ Boosie, Ace Hood, & Schife; Produced by Schife & OhZee
Dang Nelly, you on a song with Boosie and Ace Hood? Not saying that’s a bad thing, you would think he would rap with someone in his age range. All that aside, I really like Boosie’s and Ace Hood’s energy on this song. If Ace keeps it up, he is going to be a problem.

On My Way
Featuring Kevin Cossom, Ace Hood, BallGreezy, Desloc, Piccalo, Ice “Billion” Berg, Bali, Gunplay, Rum, & Young Cash; Produced by The Runners
I guess this is Khaled letting the whole crew get off on this song. One again Ace Hood is really going HARD!

Rep My City
Featuring Pitbull & Jarvis; Produced by The Team
After I reviewed a Pitbull album, I had a different respect for him. This song is one of that will change your mind about him. He is more than the dance songs that he gets credit for. This song shows you why Pitbull is called “Mr. 305”.

Bottom Line:
I have to say that Khaled kept the progression with this release. From top to bottom, this is a solid release. You have nice production, killer features, and the final result was a really good release. The good thing that Khaled did on this one was to scale it down and have 12 good songs, instead of 12 good songs with 5 or 6 alright songs. Khaled was correct when he titled this one Victory. KHALED WON!