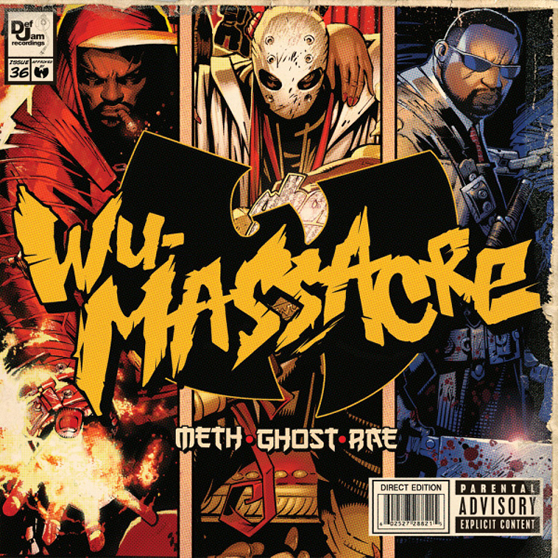 I want to make one thing clear before I start this Wu-Massacre review: The Wu-Tang Clan is one of the best groups in hip hop. If you don’t agree with me, then you shouldn’t even waste your time reading this. They debuted in 1993 with one of Hip-Hop’s greatest albums: Enter The Wu-Tang (36 Chambers). Since then, the group has released numerous solo classics: Only Built 4 Cuban Linx, Liquid Swords, Tical, Return To The 36 Chambers, Ironman, Supreme Clientele, and a handful of other possible records.

When has there been a better time to release an album by three of the clan’s finest. When Raekwon was asked about the project, he clearly stated that this one was for the fans. The only downside is that the Chef is on only four songs. Let’s just hope that he believes in quality over quantity. Now, let’s start off the review and see if this is the start of another wu-year from those emcees from Staten Island.

1. Criminology 2.5
Ghostface Killah & Method Man; Produced by B.T.
The beat provided by B.T. is almost identical to the original “Criminology” produced by RZA. Although, B.T. sped up the beat, and removed the Scarface samples in the background. Ghost gets on the track first, and shows us he hasn’t lost his step since last year. Meth concludes the track with that “witty unpredictable fly shit”. The problem I have with this track is the absence of Rae. How are you going to cut Rae when he murdered the original? (They also removed two verses by Rae & Ghost which was on “Criminology 2”). I guess they felt a short track would be a better way to start the album.

2. Mef v.s. Chef Part II
Raekwon & Method Man; Produced by Mathematics
This is the sequel to the original version which was featured on Meth’s Tical record. It sounds like they are sharing verses instead of going at each other like the first “Meth vs. Chef”. However, the two are nice, and you can’t say that one outshines the other. For these types of songs, I always like to pick who did their best at taking the track. For the original, I would say Meth by how hard he jumped on the track. For this song, I would give it to Rae. It’s not that he really outdid Meth, but Rae’s verses sound more street compared to Meth’s more comical flow.

3. Ya Moms (Skit)
Raekwon & Method Man
This is a short and unnecessary skit that seemed to be left off the beginning of “Method Man” (36 Chambers). They should’ve kept the same style and put it at the end of “Mef vs. Chef 2” like RZA use to do back in the day.

4. Smooth Sailing (Remix)
Ghostface Killah & Method Man; Featuring Streetlife & Solomon Childs; Produced by Ty Fyffe
My first thought on this track was the beat provided by Ty Fyffe. I don’t mind when a producer takes a recycled sample and mixes it up, but this is almost similar to Ant’s version of “Room With A View” (Brother Ali’s Shadows On the Sun album). This along with “Have Mercy” (Only Built 4 Cuban Linx 2) shows that some producers have been looking (biting) into Ant’s work. Nevertheless, it’s a nice lyrical onslaught by all emcees. Both Ghost and Meth rip the track, but I believe the highlight comes from Streetlife,

“I got my Ghostface on, because I’m a killa
I live the street life, why – I’m that nigga
Label me the beast, call me U-Godzilla
When I rumble in the jungle, I go go real-a
Step on the set, Inspectah Deck you
Dead in your face, straight Rzareck you
You highly mistaken, I’m hotter than Satan
Catch me in the kitchen with blood on Chef’s apron
I’m known to Cappadon, big gun in my palm look like my arm is gone
Because I’m mastered to kill, give you something you can really feel
Got many methods to kill a man, if it’s really real
I’m the world’s worst like Dirt McGirt, fuck a bitch raw dog
Then dig in her purse,
Yea, that boy’s a genius,
I stay fresh like I’m straight out the cleaners
I walk hard like a criminal, holding my penis”

5. Our Dreams
Ghostface Killah, Method Man, & Raekwon; Produced by RZA
Some Wu-heads may be excited to see a RZA beat featured on Wu-Massacre. A few of them may be a bit disappointed when they hear it because it doesn’t have that gritty RZA sound. RZA pays homage to Michael Jackson by sampling his song “We’re Almost There”. This is the perfect single for the album rather people like it or not. The musical vibes may get switched up for a second, but RZA did a great job with the sample. Plus, the trio does everything except disappoint with their first song with all members. However, I still prefer the remix done with Alicia Keys.

6. Gunshowers
Method Man & Ghostface Killah; Featuring Sun God & Inspectah Deck; Produced by Digem Trax
The album returns back to pace on “Gunshowers”. Meth takes no time to spit over the track, and makes you think that he can rhyme over anything. Ghost displays his rugged lyrics as he gets on next. Then, his kid Sun God lays down a nice verse. Sun God’s flow is almost as nice as his pops by how hard he goes in. Think Ghost showed him a few things? The track ends with Rebel INS, “This is something like Lock Up, murder behind bars, a warrior, my story defined by my scars”. Deck is still nice with the lyrics, but his flow seems to be falling off a bit.

7. Dangerous
Ghostface Killah, Method Man, & Raekwon; Produced by Allah Mathematics
Wu-affiliate producer Mathematics lays down a track for the trio. If you haven’t heard, Def Jam rushed this album, and it’s not hard to tell by the beat. It’s not bad, but sounds like Mathematics never got the complete it. Besides that, the emcees still come correct on this. Ghost murders it in my opinion, “What’s the science little nigga, yo, you beefin’ too hard, I throw five in your champ hood and into your squad”.

8. Pimpin’ Chipp
Ghostface Killah; Produced by Emile
Emile blows the horns on this solo track by Ghostface. We all love to hear as many guests as possible on Wu records, but Ghost needs no help to hold down this track. Here, he returns to his storytelling form. He speaks on crime, drugs, and sex of a pimp named Chipp. I think Ghost is one of Hip-Hop’s best when it comes to crime stories. This is a definite standout.

9. How To Pay Rent (Skit)
Featuring Tracy Morgan
This interlude seems a little more necessary compared to the Ya Moms skit. The hilarious Tracy Morgan tells women how to pay rent if they don’t have the money. It’s a great buildup for “Miranda”.

10. Miranda
Ghostface Killah, Method Man, & Raekwon; Produced by Mathematics
Miranda has that same type of formula that “Strawberry” had on Ghost’s Bulletproof Wallets album. This is the third and last song that features all three emcees, and like the others, it has that classic Wu sound to it. They all give their own version on this girl named “Miranda”. Rae and Ghost do their thing, but Mef takes the track with his Spanish influenced lyrics. Maybe Boricua can break down the lyrics for us.

11. Youngstown Heist
Ghostface Killah; Featuring Trife da God, Sheek Louch, & Bully; Produced by Scram Jones
This track goes hard. The only thing that could’ve made it better was an appearance by Raekwon. Ghost starts off the track describing the situation, “Here is the rundown, Mustafa’s getting money out in Youngstown, get some goons together, a driver, and bring the guns down”. Trife Da God takes over and explains how he runs up in the place, “65 Alpine Drive, it’s looking shady, so I hopped out, pulled the glock out – Bersa 380”. Lastly, Sheek Louch and Bully trade verses on how the heist ended, “Shooting out the sunroof, missing and shit, I was too high, still think my dutchie was lit, Trife running out the building, busting, cussing, blood everywhere, you had to see the shit…disgusting”. They couldn’t have ended the track any better… a massacre.

12. It’s That Wu Shit
Ghostface Killah & Method Man; Produced by Scram Jones
I wouldn’t be surprised if this was not supposed to be on here. The production sounds completely different compared to the rest of the album. And Ghost still finds a way to murder the track. This is the only song I wouldn’t rank as a banger. Not that it’s even bad; it just should’ve been left off the album.

Bottom Line:
If your first thoughts on the album was its too short, rushed, and should’ve had more Rae on it, then you obviously didn’t listen close enough. This album is pure heat. There are only ten tracks, but at least seven of those are standouts. Some may doubt the production, but all emcees (especially Ghost and Mef) went in with that vintage Wu-Gambino style that we all love. Plus, I’ll take a more rugged beat before an over-produced beat any day. However, I think the album could’ve been better (possibly one of the year’s best), but you can’t hate on Meth, Rae, and Ghost for Def Jam pushing the album early.

On a side note, the covers were created by Marvel Comics artist Chris Bachalo (art direction by Alex Haldi). This is another reason why you should go out and pick up the album. Bachalo made five covers (Wu-Massacre, “Miranda” single, and portrait covers of the three emcees), and all of them match that Wu-Tang comic book style like GZA’s Liquid Swords record. I picked up Ghost’s version because this sounds more like a Tony Starks album compared to anything else.

nappyPicks: The entire album. I think everyone will like one track more than the next person.