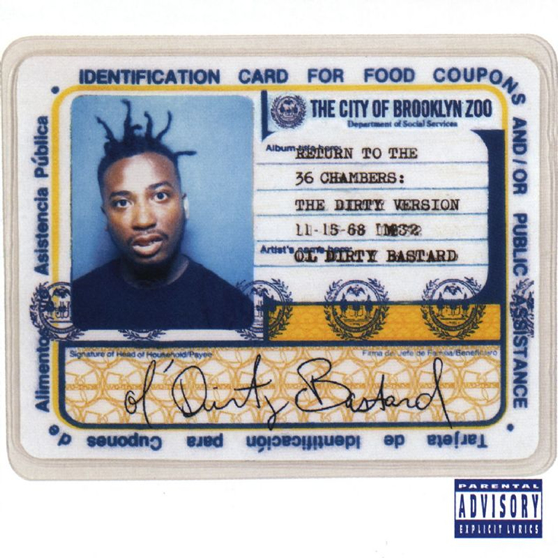 I was listening to this album as I was preparing for my final exams coming up this week, and in many ways, Ol’ Dirty Bastard was the Lil’ Wayne of today. That comparison definitely doesn’t do ODB any justice at all; he was one of the originators of what we call Hip-Hop today. But at the same, looking at both of them, they are very similar, except for the fact that ODB was crazier than Weezy could ever dream to be.. Yeah, you heard right.

Even before you pop in Return To The 36 Chambers, and you start listening to one of the strangest, yet at the same time, undeniably classic albums of all time, your eyes get wrapped around the cover. When I first saw it, I was like: “Oh shit! He did not just put his Welfare Card as the cover!” The cover alone should let you know this is something different. Ol’ Dirty Bastard got notoriety after the Wu-Tang Clan’s first album because when people heard his shit, they thought he was out of his mind. His flow was slurred like he was drunk, his lyrics were crazy (“Do you want to get your teeth knocked the fuck out?!?! I’ll fuck yo’ ass up!!”), and he had a weird style when he rapped, singing and rapping at the same time. At this point, he was the second most popular member of the group, next to Method Man, who had just released Tical. ODB was all about delivering the rawest songs he could possibly put out.

Take “Brooklyn Zoo” for example. First off, the beat was produced by ODB himself with help from True Master, and it’s banging! This is the original Hip-Hop sound right here! Then ODB comes on the track and just kills it: “I’m the one-man army, Ason/I’ve never been tooken out, I keep MC’s lookin out/I drop science like girls be droppin babies/Enough to make a nigga go cra-a-azy”. The production by the RZA was simply flawless on this entire record. The RZA was, and arguably still is, one of Hip-Hop’s greatest producers of all time, and on here he proved it, keeping with the raw focus of the album by stripping the beats down. Take “Shimmy Shimmy Ya”; the beat is only a piano key and bass in the background. Mixed with ODB’s signature flow, the result could only be classic.

Ol’ Dirty Bastard came with a variety of topics on this one too: “Don’t U Know” is a warped account of his first sexual experiences, “Damage” is basically just lyrical onslaught, and in “Harlem World”, ODB raps about life when he was a kid; at the end of the song, you even hear his mom beating him!

I could go on and on about how great this album is; Ason definitely came hard on this one. He reinvented the wheel and changed people’s opinions on what you can and can’t do in Hip-Hop. That’s why this album is nothing less than Classic Material.