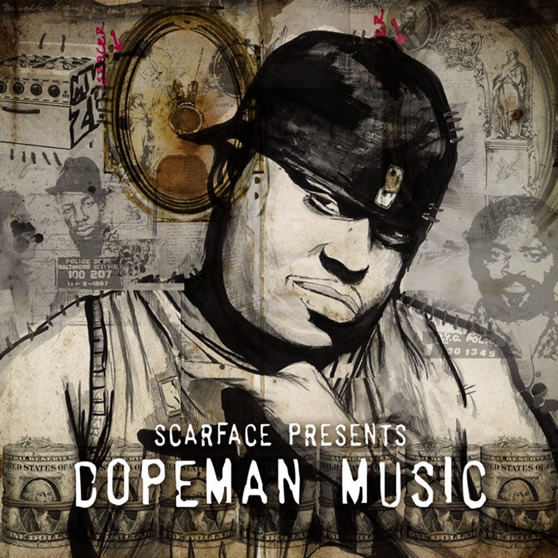 When word got out that Scarface, one of Southern Hip-Hop’s legends, was gonna release his first mixtape I think most fan were excited. Sure, he had announced retirement with his last album Emeritus, but we all knew Brad Jordan couldn’t stay away from the game. I personally thought Dopeman Music would be a free mixtape with Face rapping other people’s beats. I was wrong. Turns out that it would contain original production as well as being only  distributed in digital stores (Until May 25th when it’s slated to get an physical release). It also marks one of the few times Face has released a project without Rap-A-Lot. But besides the confusion, let’s not forget the most important question: How does the music sound?

1. Picking Up The Pieces
The intro to the album has Face rapping over some soulful production. I’m talking about Blueprint 1 soulful production. It sounds like Scarface hasn’t lost a step as he raps talks about double crosses as well as his position in the rap game. He also promotes his new upcoming album Under Oath To The Streets (I thought it was called The Habit but hey…). Good start.

2. Dopeman Music
Featuring B. James & Monk Kaza
The first single off the mixtape. It’s a shame I couldn’t find the production credits because who ever made this beat needs some recognition. If anybody was looking for this project, this should have woken their ass up. Both guest here, B. James & Monk Kaza, do a good and even though Scarface raps last, he does his thing too: “It’s all about the paper my nigga, fuck a struggle/We ain’t dying broke hoping to get it, that’s why we hustle”. This has been in my my music rotation since it leaked.

3. Lyrical Assault
Featuring Malice & Mr. Lo Key
No, not Malice from The Clipse, the featured rapper is the one from The Product. But that’s not a bad thing as all the participants on this track turn in good performances. I honestly thought it would be more wordplay with a name like “Lyrical Assault”. “Ain’t no moving me nigga/Still the coldest motherfucker on this mic since Jigga”. Slighty above average track.

5. Gwap
Featuring B. James & Monk Kaza
I’ll give you one guess on the topic of this song. I’ll take this time to say that you may wanna be on the look out for B. James. He owns this track: “And this is street poetry/Yes the hood notice me/Quick to bag a rapper like his ass was some groceries/I’m headed to the top like it or not, that’s why it’s suppose to be/Riding in the drop while somebody else chaffier me”. Money.

6. Get Lost
Featuring B. James, Monk Kaza, & Rodney Gant
Is it just me or does Scarface love making songs about trifling women. I know that’s always a popular subject for rappers, but still. If you’re a lady who slighted Brad Jordan in the past, I guess this song is for you; “Funny how time flies/You used to have the guys/Going crazy, now you fat and lazy wearing a disguise”. I liked the track okay except for the slow tempo that made it drag at times.

7. The N Word
Some listeners will immediately notice the sample (“Million Dollars” by Triumvirat); it was also used on the Hi-Tek produced “G-Unit”. “The N Word” is barely over a minute long but it gets the job done as Face gives you the struggles of being, well, a nigga.

8. The Ghetto Report
Featuring B. James & Monk Kaza
“I’m a Black man/So my s-k-i-n/Is my s-i-n/And unless I win/I’ll be headed to a cell in the pen”. With lines like this plus some melancholy strings as a backdrop, this is a good example of street blues (Think “My Block”). Great production here.

9. 2 The Beat
Featuring B. James & Monk Kaza
In no way is this a bad song, but for some reason I couldn’t get into it. It may be the beat with the light keys all the way threw it. And while I liked the lyrics (“I don’t give a fuck the best rapper/Trying to be the best stacker…”), the hook wasn’t all that great either.

10. Wanted
Featuring Malice & Mr. Lo Key
It’s funny to note that I thought this would be Scarface’s first real solo track of the mixtape, but thate seems not to be true (No one is listed on the credits but it’s sounds like Young Malice & Mr. Lo Key). The production has a dark marching theme to it and reminds me of something Eminem would be behind the boards on. No hook just three MC’s rapping back to back to back.

11. Hustle Game
Okay, THIS is the Scarface solo track. It also seems like it’s over live instrumentation (I could be wrong). Face tells us about his hustle: “If money talking, I will mention on a serious note/Cause being poor is not an option/I done been it before”. The real star here is the hard-hitting production complete with claps, heavy guitar, and bass.

12. Riff Raff (Skit)
“Big shouts out to Kanye for being different.”

13. In My Blood
Featuring B. James
B. James goes solo on this track. I couldn’t find much info on the rapper but he does show he can hold down a song by himself. Backed by menacing keys as well as an unknown female singer, “In My Blood” is a good showcase for the new rapper; “Young nigga from the ghetto is a dangerous species/Even kids tote the metal come and spray up they teachers/And they probably in up getting locked in a cage/So I paint a clear picture when I jot it on a page”.

14. Bad Man
Featuring Papa Reu
Face gets Houston based reggae artist Papa Reu to help close out the album. The only problem is that it’s over before you can get into it (Scarface only raps for 40 seconds). Plus with this being the weakest production on the album, this shouldn’t have been the closer.

Bottom Line:
The feel of this album is great. It keeps with the street theme and each track sounds as if it should follow the preceding one. This can be a good thing for some listeners and a bad thing for others. The others may get tired of tracks keeping with the same soundscape and not venturing out. Scarface fans will be happy that the Ghetto Boy has returned. If I can compare this to any of his previous albums, it probably resembles The Fix the most. I also give Scarface props for letting new rappers shine (See The Product, Facemob, & Green City). But once again, others may have come to the show to see Brad Jordan without all the assists. Either way, it’s still dope music whether you call it a mixtape, compilation, or street album.