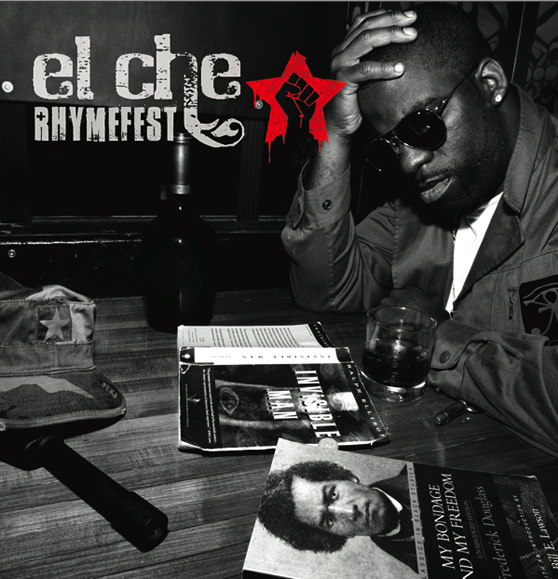 Four years. Four years since we heard about Rhymefest as well.. After launching what appeared to be a promising career with co-writing “Jesus Walks”, taking the lead as the face of Hip-Hop for the uninitiated with his humor and flow, and dropping a commercially disappointing yet highly regarded debut album, the fest was over…or so it seemed. After such a layoff and a split from a label, Che Smith (his real name) is back with his latest effort bearing his name.

1. Intro: The Agent
Trying to set the mood for the album, we get the intro to our revolutionary, El Che being tracked by “Big Music” government…or at least that’s how I took it. It ends with a freestyle-esque flow.

2. Talk My Shit
Produced by BKS (aka Best Kept Secret)
Well damn! From the offset, this neck-breaker has some serious depth. It’s not just bass, chant, and clap. We get horns, strings and keys, very robust and energetic. It’s tough to find songs nowadays that work on musical harmony like this track does. The flow is crazy.

“Fest on some ignorant shit/(I ain’t ignorant)/ Ion’t like that nerd rap either/(I’m not into it)/Boy put some bass in ya’ voice/(You sound intimate)/Hip-Hop supposed to have edge/(You’re so innocent)/Wet behind the ears, I’ll make Chucky disappear/I’m respected by my peers and I’m blessed beyond my years/I don’t kiss nobody ass I don’t pump nobody gas/My name ain’t Terrance Howard, I don’t hustle, flow, and crash!”

Now, THIS is how you dis someone and still come lyrical…by the way, where is Charles Hamilton anyway?

3. Say Wassup
Featuring Phonte; Produced by S1 & Caleb
Rhymefest loves the ladies. As you can tell by looking at the site, we love this damn song. From top to bottom, this song is flawless. I don’t need to go into detail about that right? Watch the video to the right (If it’s not there, go here).

4. How High
Featuring Little Brother & Darien Brockington; Produced by S1 & Caleb
At this point, I’m getting kind of scared. These first 3 songs are done so well, that there has to be a drop off coming, but in the meantime, WOW. I’m again saddened by the end of LB as they get on this track and grace us with some hotlines right alongside ‘Fest.

5. Chocolates
Produced by S1 & Soul Kontrollaz Production
Well, here’s that dropoff I feared. The subject matter of “Girls, Girls, Girls” is done to death. Not only that, but the terrible Forrest Gump impersonation…well, quote….fuck it, it’s just bad. Even worse is the placement of this song on the album. The first 3 songs were so dope in contrast to this, this song seems even worse. Lyrically, yeah, it’s cool I guess. Nice references to candy assortments and such, but like I’ve said, this horse is dead…let it rest. SKIP

6. One Hand Push Up
Produced by S1
We get a return to hotness here…well sorta. The song music and flow are dope as hell, but things fall apart on the hook. From the music change to the hook itself, it’s all bad. I may clip the hook from this song and keep the rest because that’s the strongest part of the song by far. He references not being on a major label this time along with is fight for independence as well as his feelings about being pushed aside for other rappers.

7. Prosperity
Produced by Jimi Conway
Religion and Hip-Hop, shout out to “Jesus Walks”. I LOVE this song. Rhyemfest goes head on to talk about the number one point of contention folks have with organized religion…FAKERS. He talks about tithing, the pastors’ cars, payment methods, commercialism, and the apparent thought that prosperity equals financial gifts. The production is simple on this song and I think it has to be so the lyrics can breathe. This isn’t a song saying church is useless, but rather a look at how the sinfulness of man has somehow been integrated into the doctrine and accepted as truth.

8. Truth On You
Featuring Twone Gabz; Produced by Terry Hunter
Production isn’t bad at all, we get more guitar and fantastic arrangement, however, the pace of this song seems to drag along and doesn’t fit with the album. The structure of the song is pretty dope though. With the message of the song being how rumors go around in the biz, the rappers take turns hitting each in a game of lyrical roasting a’la freestyle battles. Rhymefest’s ability to take shots at himself and be funny makes this song enjoyable. Not the best song on the album by far, but worth a listen for sure.

9. Intermission: Juan Carlos
Return to the story ending much like the intro with a freestyle flow at the end.

10. Chicago
Produced by Scram Jones
Rhymefest comes at us with the same true to Hip-Hop message that he has been championing since we first noticed him. With lyrical sights on fakers, skinny jeans, and false hype in the game, and lack of respect, Rhymefest pens some of his most venomous but truthful bars over a relentless track. “…coat tail nigga/got the lil room in the hotel nigga/they’ll always love me cause I’m mo real nigga/you the male version of a gold digga, go figga. ho nigga.”

11. Agony
Featuring Glenn Lewis; Produced by Terry Hunter
This is an interesting change of pace for the album. This reggae inspired hook and tempo provides the backdrop for Rhymefest to talk about that “good pain” he’s going to inflict on some chick. I especially like the lead in verse, “She wan that Rowdy Piper/A lil wrestlin’/you want some bondage/how ’bout some S&M/the first 48, I’m gon interrogate/and if she don’t confess/I’m gon’ arrest her then.” As I stated in a previous review, most days, you can miss me with the sex jams for Hip-Hop, but this one is pretty fly. The second verse is even better than the into, “ She say her man is instant, she call him Uncle Ben/He take it out, 2 minutes after he put it in/I’m like a crock-pot, baby I cook lon/this cold cut, yo salami on my footlong.”

12. Last Night
Produced by Scram Jones
No political talk, no jabs at Hip-Hop, no jabs at himself, this is flat out storytelling. I don’t like much about this song. The beat is annoying and the placement/concept of this song doesn’t fit the album at all…I feel like I say that a lot in general. Either it doesn’t fit, or it’s a lot of snatch and grab going on when it’s time to put an album out lately. Anyway, this song doesn’t fit and it’s not really a good song. SKIP.

13. Give It To Me
Featuring Saigon & Adad: Produced by Scram Jones
I can understand not placing this song near the top with the first 2, there would be no way for him to follow up that trilogy of hotness at all. With the mere mention of Saigon, you already know that it’s going to be a lyrical buffet. This guy Adad sounds a LOT like Mos Def…and that is a excellent thing. The three of them together on this song makes it the strongest song on the album. Check the video (It’s quite a different song sans Saigon & Adad).

14. Intermission: No Help
…the saga continues

15. City Is Falling
Featuring Slique; Produced by BKS (aka Best Kept Secret)
Being true to who he is, Rhymefest drops one of the most heartfelt songs this year. A song that many dudes will have on repeat outside the jeep. This is a song that speaks directly to being a father, son, boyfriend, hell, being a MAN in these times. Fantastic song!

16. Celebration
Produced by Terry Hunter
Best way to describe this is “Good Day 2010”. This is the quintessential feel good jam, be you on your grown man grind, or be you hipster, this song speaks to you as you clock out the job and start your weekend. Production is well done as it is on the rest of the album and dude singing the hook sounds like a young Jefferey Osborne when he hits the high note.

Bottom Line:
It’s tough to review albums like this, where they really speak to me and my feelings about Hip-Hop and what I think Hip-Hop should sound like and universal quality and the ability to be impartial. So, I have to just call I like I see it and break it down as best I can. When you trim the skits, you have 13 songs. Of that 13, you have 2 Skips and 5 top notch jams. The rest of the songs on the album are good solid songs. I think those of you who are older and tired of the same shit over and over will really appreciate this album. For those of you that fit squarely in the group that he’s taking issue with on this album (hipster, skinny jeans, bright colors, etc.) you may not feel but one or two songs on it and be offended or put off by the rest. The album, as stated above, has a few missteps, but they don’t completely derail this album at all. As polarizing as THE Che is, this album probably will be also, not just by title, but by design.